"Wrecked" is the tenth episode of the sixth season of Buffy the Vampire Slayer television show, and is the 110th episode in the series. Written by Marti Noxon and directed by David Solomon, it originally broadcast on November 27, 2001 on UPN.

Buffy's tryst with Spike leaves the Slayer shaken to the core; Willow falls victim to a warlock who stimulates her craving for magic.[1]

Tara and Dawn wake on the couch and find that neither Buffy nor Willow returned home the night before. Somewhere else, Buffy wakes up naked with Spike, noticing the building around them fell down. Spike tempts Buffy to stay until he's able to leave without the daylight. It works until he tells her that he knew the only thing better than killing a Slayer, which angers her. Buffy argues that this will never happen again, while Spike tells her she won't get over him. She threatens him to not tell anyone about it and he agrees, but shows Buffy her stolen panties. She punches him and leaves.

Willow returns home with Amy, who rambles about Willow's magical use in front of Tara and Dawn. Upset, Tara leaves just as Buffy returns. Amy leaves as well after a chat, so Buffy and Willow go to bed after their long nights. In her room, Willow tries to shut the drapes with magic, but finds that she can't.

At the Magic Box, Xander searches fruitlessly for information on what could have frozen the security guard and stole the diamond from the museum, while Anya looks at bridal magazines. Buffy arrives, and the discussion turns to Willow. Xander is concerned that Willow has found herself someone new to hang around with who won't monitor her use of magic. Buffy defends her stating that everyone makes mistakes.

Amy meets Willow again and suggests they visit Rack, a warlock who can give them great spells that last without any recovery time. They enter his cloaked house and find it filled with the magically addicted waiting for their turn, but the two are attended immediately. Rack gives them what they came for, so Amy spins about the room as Willow hangs out on the ceiling, seeing spots and weird images. The next morning, Willow wakes in her own room and cries in the shower. She manipulates some of Tara's clothes to form an invisible body and curls up against it.

Dawn makes some interesting food and makes plans to see a movie with Willow. Buffy returns home to find Amy stealing some of Willow's magical supplies. Buffy scolds her and Amy mentions Willow's whereabouts. Meanwhile, Willow and Dawn talk about food and Tara, then take a detour to Rack's place so Willow can get a fix. Dawn waits impatiently in the waiting room with a strange man. Inside Rack's room, Willow floats and sees a demon holding a limp body, which makes her scream.

Buffy wakes a very naked Spike in his crypt and asks if he knows where Willow and Dawn are. When she mentions Rack, Spike grows concerned, having heard of him. He explains that the warlock deals in dark and dangerous magic, and only witches and vampires can find his cloaked place. Buffy decides to take him along in her search.

Willow finally emerges from Rack's room, hours after she entered. Dawn is mad Willow left her so long, but Willow doesn't care. Dawn realizes that something is wrong with Willow and becomes eager to return home, but Willow refuses and promises her fun to make up for the missing movie. Nearby, while they walk in search of the cloaked house, Spike tells Buffy again how much she really wants and needs him after they spent the night together.

A demon confronts Willow, claiming that she summoned him with her use of magic. Willow expects him to not be real, until the demon cuts Dawn, so the girls run. Willow uses magic to take over and drive a car, but it crashes and both are wounded. Dawn finds that she has a broken arm as Willow is knocked out against the steering wheel. The demon catches up with their wrecked car and Dawn tries to fight it off. Spike and Buffy, who heard Dawn scream, come to the rescue. Buffy fights the demon while Spike takes care of Dawn. The demon suddenly explodes into flames as a result of Willow's magic. While Willow apologizes in tears, Buffy tells her to stay back and Dawn slaps her away. Spike leaves with Dawn and Buffy stays with Willow, who continues to cry and begs for help.

At the Summers house, Buffy talks with Willow about her abuse of magic and the consequences. Buffy thinks that Willow became addicted to magic due to her break up with Tara, but Willow admits that the addiction was why Tara left. Buffy tells Willow that she doesn't need magic to be special, and Willow says that before the magic she was "some girl," who never knew. Buffy states that she was far more than this, and reminds her that Tara wants her to stop. Willow knows that, someone will get hurt if she continues the way she is, and declares that she's giving up magic for good. Buffy agrees with that and tells Willow that it's time for them to think about what they're doing before doing it.

Later, Willow fights the symptoms of withdrawal in her bed. Buffy, in her own bed, hugs a cross with garlic surrounding her bedroom.

Amy: "I want to have fun, Willow. I've been in a cage."
Willow: "There was a little ball. And you seemed to enjoy playing with those cardboard toilet paper rolls."
Amy: "As cages go, it was fine. But I was still confined. I've got lost time to make up and if people don't like it, screw them." 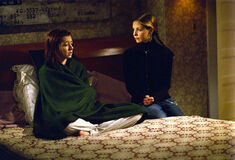 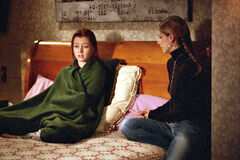 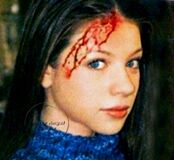 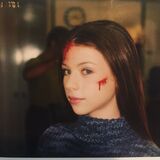