"Witch" is the third episode of the first season of Buffy the Vampire Slayer and the third episode in the series. Written by Dana Reston and directed by Stephen Cragg, it was originally broadcast on March 17, 1997, on The WB network.

CHEERLEADER FROM HELL — When students start dropping out of cheerleading tryouts by spontaneously combusting, going blind and losing the power of speech, Buffy and her posse suspect a powerful witch is in their midst. Buffy herself soon becomes the target of a deadly spell as they discover the witch's true identity. Meanwhile, Xander finally musters up the nerve to ask Buffy out on a date but in the throes of a witch's spell, Buffy's response isn't exactly as he'd hoped.[1]

Despite Giles's misgivings, Buffy decides to try out for the Sunnydale High cheerleading squad in order to reclaim some of the happy, normal social life she enjoyed back in Los Angeles. Right before the trials begin, Xander gives Buffy a bracelet with "Yours Always" engraved on it. During the trial, the hands of a girl named Amber spontaneously combust. In the library, the gang discusses what happened and possibility. Xander and Willow try to force their involvement, through research and stuff.

That evening, Buffy returns home and tries to connect with her mom. However, Joyce is distracted by work and setting up the gallery's first major show. They talk about cheerleading and Joyce inadvertently goes on a guilt trip about Buffy's past.

Trials continue the next day with group work. During the routine, Amy falls and knocks over Cordelia. Afterwards, Buffy meets her outside the gym, in front of the trophy case and they discuss Amy's mom, Catherine "the Great." Amy shows admiration for her mother's accomplishments and scorn for her absent father. She also is stressed over not being able to compare to her mother's skill and runs off. Willow shows up and tells Buffy about her and Amy's friendship during junior high. Willow reveals that Catherine was emotionally abusive towards Amy. Will says Catherine would often bully Amy over her weight and even withhold food. They then move on to what information Willow had found about Amber, which had nothing of interest. While Amy is changing, Cordelia tries to intimidate and threaten her.

At school, Xander eagerly asks Willow if Buffy is wearing the bracelet he gave her before tryouts. Upon discussing Xander's crush on Buffy, Xander tells Willow, "that's why you're so cool. You're like a guy." They see the cheerleading sign being posted. Amy is crushed when she only makes the substitute list as a 3rd alternate. Buffy tries to be kind to Amy, who is still caught up on her mother. That afternoon, an unknown person is shown to be using Barbie dolls dressed as cheerleaders in a magic ritual over a cauldron, naming Cordelia as its victim.

The next morning before school, Buffy's eating breakfast when her mom tries to tell her about her own high school experiences with the yearbook staff. Buffy shuts her down and an argument ensues about Buffy living her own life. Xander continues to talk to Willow about his crush on Buffy and finally decides to ask Buffy out; to his dismay, though, Buffy is distracted by a spellbound Cordelia. Cordelia is struck blind during her Driver's Ed class under the spell, and is saved from wandering into traffic in the nick of time by Buffy.

According to Giles, blinding enemies is a favorite trick amongst witches. Believing Amy to be a witch, Buffy, Xander and Willow collect some of Amy's hair during science class in order to prove that she cast the spells. However, just as Amy notices the test they did on her, another cheerleader, Lishanne Davis, suddenly starts screaming, but her screams are muffled as her mouth has disappeared. Amy goes home and orders her mother to do her homework, while she goes upstairs holding Buffy's bracelet from Xander, which she stole from Buffy during class.

The next morning, a slightly manic Buffy blows her chance at the cheerleading squad when she tosses the Squad Captain, Joy, through the room, ceding her slot to none other than Amy. Buffy turns out to have something more than just a mood disorder: a Bloodstone vengeance spell has destroyed her immune system, giving her only about three hours to live. The only way to cure her and break the other spells is to get the witch's spell book. The ailing Buffy and Giles go confront Catherine — only to realize that the real Amy is stuck in her mother's middle-aged body, while her mother is reliving her glory days. Giles finds the witch's book and takes Amy and Buffy back to school to break the spells. Buffy is fading fast.

Amy's mother is cheering the Sunnydale High basketball team when she starts getting visions of what Giles is trying to do. Xander and Willow are unable to stop her from storming into the science lab with an axe, but buy enough time for Giles to break the spells. Amy and her mother switch bodies again, and Buffy feels good enough to fight. However, Catherine's power is too great, and it is only by kicking down a steel vent cowling and reflecting her last spell that Buffy wins the day. Catherine then vanishes.

When Amy and Buffy talk in the school hall the next day, they pass by the school's trophy cabinet, where the trophy to Catherine the Great stands. While both girls wonder where Amy's mother ended up, the trophies face reveals Catherine's eyes and a muffled voice.

which translated back to English would roughly be:

Willow: Her mom is a real…
Buffy: Superwoman?
Willow: Something like that.

References to Hitler, Nazis, and the Holocaust in U.S. films and TV series are routinely cut out by German translators. Another example of this is "Phases."

Xander: "Hey, we've fought vampires. Anything else'll be a walk in the park."

Giles: "If I had the power of the black mass, I'd set my sights a little higher than making the pep squad."

Xander: "Wow, you've got a killer streak I've never seen before. Hope I never cross you."
Willow: "I do, too. Then I'd have to carve you up into little pieces."

Giles: "Yes, the ducking stool! We throw her in the pond. If she floats, she's a witch; if she drowns, she's innocent… [then off their looks] …some of my texts are a bit outdated." 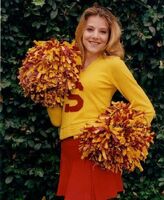 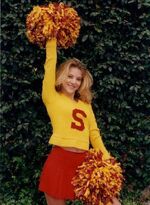 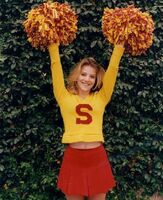 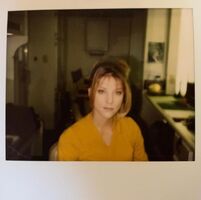 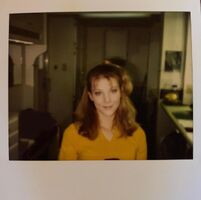 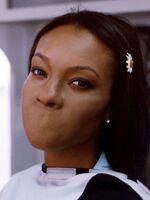 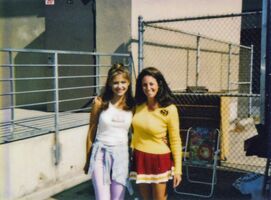 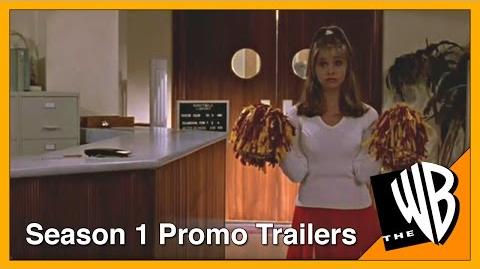 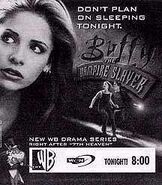