Later that night, Willow, Anya, and Xander are in line to enter The Bronze. Xander notices Willow is still guilty over her “stalker”, but she defends Caitlin describing her as just too enthusiastic. The leader of the Wicca group, Kelly Eisen, overhears them, and says Caitlin is a loser that has been mooning over Willow and Tara after they left the group. Angrily, Willow points out Kelly's hypocrisy on preaching "benevolent earth goddess stuff", but calling someone a loser for having different beliefs.

They visit Caitlin in her dorm, who has been crying with guilt, but tells them she had no idea this would happen. In the hallway, Tara explains to Willow that Morrigan is a powerful and evil Celtic deity, who must have punished those Caitlin perceived as a threat. With Giles and Buffy unavailable, Willow decides to warn the other girls, while Tara researches how to stop Morrigan. Outside, when Willow finds another girl, Dana, dead, she hurries back to Tara 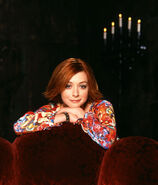 Retrieved from "https://buffy.fandom.com/wiki/Willow_%26_Tara:_WannaBlessedBe?oldid=212212"
Community content is available under CC-BY-SA unless otherwise noted.