"Who Are You?" is the sixteenth episode of the fourth season of Buffy the Vampire Slayer and the seventy-second episode in the series. Written and directed by Joss Whedon, it was originally broadcast on February 29, 2000, on The WB network.

THE CONCLUSION OF A TWO-PART EPISODE WHEN FAITH RETURNS — Buffy battles to escape the clutches of the Watcher's Council special operations team who plan to send her to England, while Faith continues to wreak havoc in the lives of Buffy's family and friends. Meanwhile, it's Willow and Tara who figure out Buffy's whereabouts, but not before Faith has done some serious damage to Buffy's relationship with Riley.[1]

Faith (in Buffy's body) stands by Joyce while Buffy (in Faith's body) is carried away in an ambulance. They discuss Faith, and Joyce notes how horribly unhappy Faith must be. After their conversation, Joyce hugs Faith, who is uncomfortable with this sudden affection. Afterward, Faith goes upstairs to take a bath. She tries to get used to her new body, and practices phrases she thinks Buffy would say. Faith then crimps her hair, puts on sultry makeup, and gets dressed up in black leather. Soon after, she buys a plane ticket with Joyce's credit card, then goes out to meet the Scooby Gang. Meanwhile, Willow and Tara talk about Faith, and Tara confesses that she belongs to Willow.

An armored truck runs into the police car carrying Buffy and leather-clad operatives of the Watchers Council jump out. They capture Buffy and put her in the back of their truck. Faith attends a meeting at Giles's apartment with Xander, Willow, and Anya, who makes Faith uneasy, as she has no idea who Anya is. Faith happily tells the gang Faith is on her way to prison, but Giles tells them this is unlikely as the Watcher's Council has sent a team to apprehend the rogue slayer and take her back to England, meaning they are unlikely to see her again. Faith is ecstatic at the news, and she celebrates by dancing concurrently with several men and women at the Bronze until she runs into Spike.

Once she realizes who Spike is, Faith speaks to him seductively and teases him ruthlessly, telling him all the things she could do to his body; when it is obvious that Spike is confused, yet attracted to her, she concludes by telling him that she won't do anything she could do to Spike "because it's wrong." Frustrated and furious, Spike promises that as soon as he gets his chip out, they will have a confrontation. Faith, however, merely smirks at Spike's threat and walks away from him, and he storms out of the Bronze soon after.

Elsewhere, a vampire pack, led by Boone, return to their nest to find Adam waiting for them. Adam talks to them, discussing things that vampires fear and concluding that vampires are a paradox; because they are immortal, they fear death even more than mortals do.

Meanwhile, Buffy awakes to find herself chained in the back of a truck with the Council team. She tries to convince them that her body has been switched with the other Slayer, but they are unfazed: she is merely a package for them to deliver. At the Bronze, Willow introduces Tara to Faith. When Willow goes to get drinks, Faith makes no effort to maintain Buffy's persona and says several rude, harsh things to Tara. Willow returns and points out a vampire with a girl, which Faith reluctantly leaves to slay. When the girl thanks Faith for saving her, Faith is stunned by the girl's gratitude.

One of the Council members, Smith, enters the truck where Buffy is being held, and she attacks him, threatening to kill him unless she is let go. However, the other members, Collins and Weatherby, tell her that they all settled their affairs before leaving for the mission and are prepared to die if it means accomplishing it. They then tell her to do what she wants and, unable to go through with her threat, Buffy is forced to let Smith go. At the Bronze, Tara recognizes the fragmented energy coming from Buffy, and knows that "Buffy" is not the real Buffy. She informs Willow, and then Willow and Tara prepare to perform a ritual to locate Buffy's real energy.

Faith visits Riley and seduces him in the guise of Buffy. At first, Faith is overly sexy and provocative; however, she is surprised to find that Riley is not interested in games, and that he wants to make love rather than just have sex. After they sleep together, Riley tells Faith that he loves her, which confuses and disturbs her own identity yet again. In the morning, she attempts to leave quickly from a sleeping Riley and catch her flight, but ends up having a confrontation with Forrest, who is concerned about Buffy's influence over his friend. Meanwhile, Adam's eloquence with words has completely won over Boone and his gang and they pledge their loyalty to him. He tells them they will announce his presence, and decides to send them to what they fear the most.

When the Council team realizes that they will not be able to get the dangerous Slayer to England, they decide to kill her instead. Buffy, however, is prepared; she uses Collins' gun to break her chains and the lock on the door, and then moves to the driver's seat and leaves with the armored truck.

Meanwhile, Faith, now at the Sunnydale Airport, prepares to leave town by obtaining a boarding pass for a plane. Buffy arrives at Giles' place and struggles to convince him of the truth about the body swap. She reminds him about his stint as a Fyarl demon and about his sexual relationship with her mother, which sufficiently convinces him of her true identity. Willow and Tara arrive (with Tara being introduced to Buffy properly as well as Giles), having created a Katra that will switch Buffy and Faith back the next time they make contact. After turning on the TV, they learn that Boone and his group of vampires are holding hostages at a church. At the airport, Faith sees this on TV, and, despite the fact she was about to leave, decides to go and face the vampires instead.

Riley, who has controlled the situation with the police, meets Faith at the entrance and wants to help. She reminds him of his injury and asks him to stay outside. Buffy, Giles, Willow, and Tara also arrive, and Giles acts hysterical in order to distract the police so Buffy can slip inside.

Faith challenges the vampires inside, and she quickly dusts the other vamps before taking on Boone. As he starts talking about how Adam has shown him the way forward, Buffy stakes him from behind. The two Slayers fight and Faith gets Buffy on the floor and starts to furiously punch her (own actual) face while calling her "nothing," "disgusting," and a "murderous bitch." Buffy grabs Faith's hand with the Katra, and the two switch back to their own bodies. Faith runs away, leaving Buffy stunned.

The next day, Buffy and Riley talk. Buffy realizes that Riley had sex with her while Faith was in her body, a revelation that deeply troubles them both. Meanwhile, Faith leaves town in a cargo car of a train.

Adam: "(You are here to be my first. To let them know I'm coming.) I am the end of all life, of all magic. I'm the war between man and demon, the war that no one can win. You're a part of that now. You have to show me you're ready." 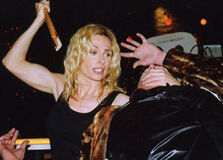 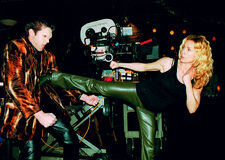 "Who Are You" promo

"Tonight, Buffy isn't quite herself."