When She Was Bad

When She Was Bad

"When She Was Bad" is the season premiere of the second season of Buffy the Vampire Slayer and the thirteenth episode in the series. Written and directed by Joss Whedon, it was originally broadcast on September 15, 1997, on The WB network.

BACK TO SCHOOL — When Buffy returns home to Sunnydale after spending the summer away, Xander and Willow become concerned with her disturbingly cold and distant behavior. Meanwhile, Cordelia and Sunnydale High teacher Ms. Calendar are kidnapped and Buffy is convinced that the fight to protect them and the world from the undead is hers alone. Still reluctant to risk getting close to Angel, Buffy turns him away before either one can express his or her true feelings.[1]

Xander and Willow are quizzing each other on film quotes on the outskirts of a cemetery. The pair comment on the quiet summer in Sunnydale since they buried the Master in the graveyard, and Xander remarks that he is actually looking forward to school starting up again. A tender moment ensues when Xander playfully puts ice cream on Willow's nose, but just as it looks as if the two are going to kiss, a vampire appears behind Willow.

Xander intervenes, and is barely holding out when Buffy shows up. She dusts the vampire, and then turns to her friends and asks: "Miss me?" She then informs her friends about spending the summer in Los Angeles with her father. They tell her about their summer, and how this is the first vampire they've seen since the Master was killed. They also tell her about how they buried the Master's bones in consecrated earth, and Buffy feels uneasy. She is also in no hurry to see Giles, telling the others she'll just wait until she returns to school. At home, her mother, Joyce, is a bit uneasy about Buffy's shopping spree. Her father, Hank, explains that Buffy seemed distant the whole summer, and they never really established a connection (hence him overcompensating by letting her shop).

At school, Principal Snyder expresses his disgust with students while talking to Giles, who spots Jenny and slips away; an oblivious Snyder babbles on. Giles finds the gang, and Buffy tries to hide the fact she's not really that happy to see him, and explains that although they have closed the Hellmouth, the mystical energy still attracts evil forces to the town. He asks Buffy to resume her training after school, but is unnerved at how eager she is to get started.

Whilst practicing, Buffy has a vision of the Master and begins wailing on a dummy. She declares that she's prepared for whatever comes next. At night in her bedroom, she dreams of being killed by the Master. Angel appears in her window to warn her that the Anointed One has been gathering forces. Buffy brushes him off. He tells her he missed her and leaves before her reply.

The next day, the Scoobies run into Cordelia, who is oblivious to the idea of keeping Buffy's Slayer identity a secret. Buffy heaps a harsh insult on Cordy that her friends find "too good." Meanwhile, the Anointed One and a vampire named Absalom are forcing other vampires to dig up the Master's bones barehanded through consecrated earth.

At the Bronze, Xander and Willow wonder about Buffy's behavior. Willow tries in vain to recreate the ice cream moment, but Xander does not do what she had hoped, saying instead: "You've got something on your nose." Buffy then arrives and mocks Angel. She begins a slow, sensual dance with Xander that bothers Angel, Willow, and even Xander himself. Buffy leaves Xander hanging mid-dance after asking if he'd like her to thank him for resurrecting her. Outside, Cordelia confronts Buffy and tells her to get over her problems. As Buffy leaves, Cordy is kidnapped by two dark figures. They throw her into a basement with an unconscious Ms. Calendar. Meanwhile, Buffy walks to the grave that holds the bones of the Master, and finds it dug up.

At lunch the next day, Giles shares Xander and Willow's concerns about Buffy, who shows up to tell them about her discovery. Giles remembers some revivification rituals and Buffy is angered that he never told her. Snyder shoos away the students, and tells Giles he would like to expel Buffy, as he "smells" numerous bad things about her. Giles tells him to give her a chance, and Snyder thinks his faith in her is "weird." That night, the Scoobies learn that a revivification ritual needs the blood of the "closest" person to the deceased. Buffy assumes that would be her, since she and Master killed each other. Suddenly, Cordelia's watch, wrapped around a large rock, sails through the library window. It includes a message calling Buffy to the Bronze or they'll kill Cordelia. Buffy leaves for the obvious trap alone, saying she cannot look out for them while slaying.

Outside the Bronze, Buffy tries to pick a fight with Angel, who ignores her. Inside, they find just one vampire, trying to pass for Cordelia. Buffy realizes that the ruse wasn't a trap, but a distraction. At the same time, Giles realizes that the foreign text actually said that the ritual requires the blood of those physically nearest to the Master when he died — in other words, Giles, Willow, Cordelia, and Ms. Calendar. As everyone becomes aware that they're the ones in danger, several vampires emerge from the shadows

Buffy returns to the library to find a bloody Xander, who warns that, if anything happens to Willow, he will kill Buffy. They go back to the vampire at the Bronze, whom Buffy tortures into confession of where the ritual will take place. Arriving at an abandoned factory, Buffy interrupts the ritual staking all vampires involved as the Anointed One is whisked away, while Angel and Xander rescue the others. With the Master's skeleton laid over a table, Buffy utterly destroys it with a sledgehammer while her friends watch. She begins crying and Angel hugs her.

The next day, Buffy talks with Giles about her fear of facing her friends again after treating them so badly and putting them in danger. He tells her she can't hide from them forever, and assures that this was hardly the worst mistake she'll ever make. Buffy then reluctantly enters class, where Willow and Xander have saved her a seat. Together, they joke and make plans for the night.

Meanwhile, at the factory, the Anointed One gazes at the scene of destruction and declares: "I hate that girl." 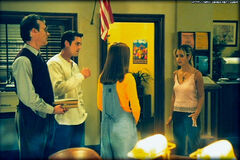 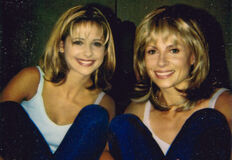 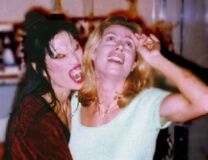 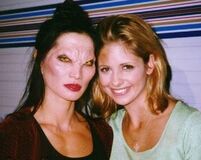 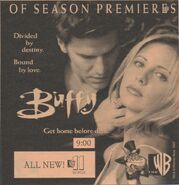 "[Night] of season premieres: Divided by destiny. Bound by love. Get home before dark."