"What's My Line? Part Two" is the tenth episode of the second season of television show Buffy the Vampire Slayer, and the twenty-second episode in the series. Written by Joss Whedon with Marti Noxon and directed by David Semel, it originally broadcast on November 24, 1997 on The WB network.

LOVE AT STAKE — In this conclusion of a two-part episode, Buffy reluctantly confronts Kendra the new vampire slayer, only to find that the two are polar opposites in every way. Much to Buffy's chagrin, she must join forces with Kendra to save the man who means the most to her — Angel. Meanwhile, with Buffy on the hunt, Xander and Cordelia are left to wait at Buffy's home where they have a close encounter of their own kind.[1]

Buffy tells Kendra, who has just introduced herself as the Vampire Slayer, that she cannot be as she is the Chosen One. Kendra maintains her story, so Buffy calls a truce and the two go to Giles for assistance in explaining their situation. Giles confirms that he knows of the watcher Kendra claims to be learning under, and then realizes that she was called as a Slayer when Buffy temporarily died in her fight with the Master. Their discussion reveals that Kendra had locked Angel in a cage, leaving him to be dusted at sunrise. Buffy and Kendra arrive to find only an empty cage; Buffy fears the worst, but Kendra points out the absence of dust.

Willy saves Angel from near-death, only to dump him in a sewer with Spike, who pays him for it. Spike takes Angel back to the warehouse, where he will be held until he can be sacrificed to restore Drusilla to full strength. Drusilla asks Spike to let her have fun (a.k.a. torture) with Angel. Although Spike briefly hesitates, he soon smiles and agrees, unable to resist indulging her whims. Meanwhile, as Buffy ruminates on the co-existence of two slayers, she entertains the possibility of quitting and letting Kendra take over her Slayer duties.

Giles begins to bond professionally with Kendra, who seems to be more dedicated to her calling than Buffy, on a professional, intellectual, and academic level. Her only life is slaying. Xander and Cordelia face even bigger problems when they find that the salesman that Cordelia let into the Summers' house is actually an assassin who can transform himself into thousands of worms. They run and hide in the basement, although before long, they are having a fight and hurling insults at each other. Abruptly, they kiss, and then Xander and Cordelia rush to escape the basement, running past the assassin.

At school, the career placement test has thrown Willow and Oz together, and they discuss their similar interests. Buffy, whose test results recommend a career in law enforcement, attends the career fair seminar to appease Principal Snyder. The police officer leading the seminar calls Buffy's name, but when Buffy identifies herself, the officer, Patrice, draws her gun and aims it at the Slayer, revealing herself as the third assassin. Buffy avoids the bullet, which instead hits Oz in the arm as he pushed Willow out of harm's way. Kendra comes to Buffy's rescue, and they fight off the attacker. The Scoobies then gather in the library, where Giles announces that Spike intends to kill Drusilla's sire in the ritual in order restore Drusilla to full strength. Buffy reluctantly admits that Angel is Drusilla's sire, adding that Spike can do anything to her, but he had better not mess with her boyfriend.

Meanwhile, Angel is being tortured by Drusilla, both emotionally and physically; she pours holy water on him as she reminds him about how he killed her whole family. Spike comes in and announces that it is time for the ritual to begin. Angel taunts Spike with insinuations that he's had sex with Drusilla and she enjoyed it, but that Spike is unable to satisfy her, in hopes that Spike will kill him before he can be used to cure Drusilla. Spike is infuriated, but does not lose sight of the big picture.

Meanwhile, Kendra gains a new found respect for Buffy's qualities as a Slayer. Later, the Slayers go after Willy to learn what happened to Angel. Buffy forces Willy to take her to the location of Spike and Angel, but Kendra refuses to accompany her because proper procedure dictates she return to tell her Watcher first, and she doesn't think they can stop the ritual alone. So Buffy alone accompanies Willy, but it's a trap – he takes her to the assassins, then together they go to the ritual which has already started. Spike orders Buffy's death, but at that moment, Kendra arrives to save her, along with Giles, Willow, Cordelia, and Xander. Xander and Cordelia work together in the hallway to kill the worm assassin; since he can only be destroyed in his "disassembled state," they lure the worms underneath a door into a sticky trap and then kill him by stomping on the worms. Willow and Giles work together to stake a vampire while Buffy and Kendra fight Patrice and Spike. Spike starts a fire and rushes to rescue the unconscious Drusilla, hoping that the ritual has had time to cure her. However, Buffy prevents their exit, crushing them in falling rubble. She rushes to the floor to help the weakened Angel, while everyone watches in awe, and she helps him exit the building, believing the fire would consume Spike and Drusilla.

At school, Willow finds Oz by the vending machine where he is buying a box of animal crackers. The two have a conversation in which Willow tries to thank Oz for saving her life (he says he doesn't do thanks) and he compliments her smile in between talking about the monkey's clothes.

It's soon time for Kendra and Buffy to say goodbye, with the two now on friendly terms, with Kendra even wearing Buffy's shirt (although Kendra refuses to give Buffy a hug goodbye, and instead gives a smile). She tells Buffy she does not blame her for being with Angel, since he is a very beautiful man, and that slaying is not a job, it is a part of who they are. The two part ways, with Buffy feeling comforted by the knowledge she is no longer alone in her sacred duty.

In the ruins of the church, it is revealed that Spike has only just managed to survive but has been severely scarred and injured. He is helped out of the rubble by Drusilla, who has been successfully cured and fully revived. She promises to return the favor, and make him strong like her as she carries him out.

Xander: "You know, just when you think you've seen it all, along comes a worm guy."

Kendra: "Your English is very odd, you know."
Buffy: "Yeah — it's something about being woken by an ax. Makes me talk all crazy." 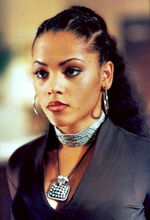 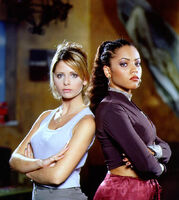 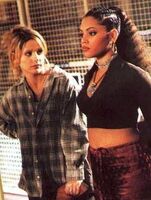 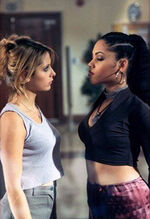 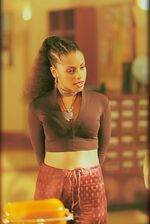 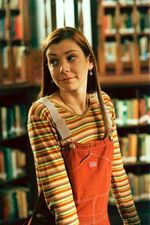 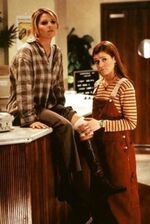 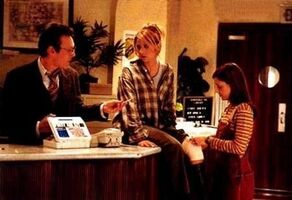 "Tonight, everything changes. Two Slayers. Both want Angel. One for his heart. The other, his soul."
Add a photo to this gallery

Retrieved from "https://buffy.fandom.com/wiki/What%27s_My_Line%3F_Part_Two?oldid=235760"
Community content is available under CC-BY-SA unless otherwise noted.