What's My Line? Part One

What's My Line? Part One

"What's My Line? Part One" is the ninth episode of the second season of Buffy the Vampire Slayer and the twenty-first episode in the series. It was written by Joss Whedon, Marti Noxon, and Howard Gordon, and directed by David Solomon. It was originally broadcast on November 17, 1997, on The WB network.

LOVE AT STAKE — In part one of a two-part episode, Buffy and Angel finally go out on their first date; Angel sets out to hunt down his rival, Spike, however, unbeknownst to Angel, Spike and his new recruits are determined to capture him in hopes of helping the frail Drusilla; and Buffy encounters her new ally, Kendra.[1]

As career week arrives, Buffy feels isolated and apathetic because the students around her are exploring their choices for the future, while her fate as the Slayer is already set in stone. Even so, she must join Willow and Xander in filling out career questionnaires.

Spike works on a cure for Drusilla as she lays out Tarot cards. He becomes frustrated with Dru's childlike behavior and ruminates on Buffy's interference in his plans. He believes Drusilla's cure can be found in the book that was recently stolen from Giles. Dalton, a vampire transcriber, is unable to read it. Drusilla informs Spike that the book is in code, and she knows the location of the key needed to decipher it.

Buffy witnesses Dalton stealing an object from a mausoleum, but he escapes when she is distracted by another vampire. She enters her bedroom through the window out of habit, despite the fact that her mother is out of town for a few days, and finds Angel waiting to warn her of grave danger, and she notes with irritation that he does this a lot. He discovers her childhood obsession with ice skating, and offers to take her to do so in the following day. At school the next morning, the test results are revealed; it recommends Xander become a prison guard, Buffy look into law enforcement or environmental design, and Willow's results aren't even posted. However, Willow is escorted into a secluded lounge area with fancy food and drink, to be recruited by a leading software company, along with Oz.

Buffy reports to Giles, and he is distressed and disappointed when she tells him about theft from the mausoleum.

Spike and Drusilla examine the key stolen by Dalton, a large gold cross. Spike decides to call in the Order of Taraka, an ancient guild of assassins that have existed since 970 BC, to rid himself of Buffy once and for all.

At the mausoleum, Giles realizes with concern that Josephus du Lac — a member of a religious sect that had been excommunicated by the Vatican — is buried there. He is the author of the book stolen from the library, and Giles believes the key was stolen from the tomb.

In the meantime, the assassins begin to arrive. A large, intimidating man exits a bus, and a door-to-door beauty salesman walks down the sidewalk past Buffy's house to her next-door neighbor's. He gains an invitation inside, the door closes, and the lady of the house screams. At the Sunnydale Airport, a young woman attacks an airplane worker in the cargo hold of a plane, escaping with little difficulty.

Giles tells Buffy, Xander, and Willow about the du Lac Cross, which can be used as the key, and he enlists their help with further research. Buffy manages to keep her date with Angel at the Sunnydale Ice Palace. She is attacked while ice skating, and Angel arrives in time to help her fight off the assassin, whom she kills with the blade of her skate. Angel, recognizing the assassin's ring, asks Buffy if she knows what it means, and then warns her that she should leave Sunnydale and hide. Angel is wounded and doesn't want Buffy to have to touch his vampire face, but she removes her gloves to touch his face with her bare hands, assuring him that she hadn't even noticed, and kisses him. The female from the plane watches from the shadows.

The assassin next-door to Buffy's house feeds on the body of the woman he has killed by disintegrating into hundreds of writhing worms that can reshape themselves into limbs at will. Buffy is paranoid and jittery, suspicious of each person who passes by in the hallways at school. As Oz passes her, she panics and pins him against a locker. Oz declares her to be a "tense person." Angel goes to Willy's Bar for information, and Willy finally confirms Angel's suspicions that Spike is behind the assassins, but before Angel can leave, he is attacked by the mysterious female. They fight, and she locks him in a metal cage in front of an eastern window, with only a few short hours until sunrise. Meanwhile, Buffy heads to Angel's place and lays down in his bed and falls asleep.

Giles awakens Willow, who had fallen asleep. He reveals that the missing manuscript is a ritual to restore a weakened vampire back to health. Xander and Cordelia enter Buffy's house, and Xander searches for her while Cordelia waits downstairs. She hears a knock at the door and lets in the centipede assassin, again appearing as a make-up salesman promising free samples. In Angel's bedroom, Buffy awakes to find herself being attacked by the mysterious woman. They fight, with Buffy assuming that the woman is the next member of the Order of Taraka, until the woman asks who Buffy is. Confused, Buffy returns the question and is shocked when the woman introduces herself as Kendra, the Vampire Slayer. 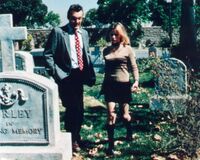 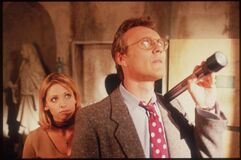 "What's My Line? Part One" promo

"Six months ago, Buffy experienced death for one brief moment. Tonight, she pays the price for living. 'Hunters.'"