Werewolf was a human who suffered from lycanthropy, an infection that caused them to transform into lupine creatures, particularly during full-moon nights.[1]

“It acts on pure instinct. No conscience, predatory and aggressive.”
―Rupert Giles[src]

A person became a werewolf after they were bitten by another werewolf,[1] infecting the blood with werewolf saliva.[2] It did not matter if the original werewolf was transformed or not at the moment the bite took place.[1] Scratches did not change a person,[2][3] nor was the condition genetically passable to offspring.[4]

From the point of being bitten and on, the victim transformed into a lupine creature and remained so from sunset to sunrise during the three nights of the full moon,[1] or alternatively from moonrise to moonset in the case of the Lycanthropus exterus breed.[5] If the bite was received during a night of the full moon, the newly-bitten werewolf would only be able to transform by the time of the next full moon night.[5] When transmuted, the human side of the psyche was completely dormant, taken over by a feral predatory mentality that knew only the hunt.[1]

“They're suckers for that whole sexual heat thing. Sense it miles away.”
―Gib Cain[src]

Werewolves were capable of sensing strong emotions, sometimes from miles away, and were attracted by sexual heat.[1] The werewolf's sense of smell was highly developed, eventually remaining so even when in human form.[6] It was enhanced enough to track and distinguish between the scents of individual people,[6][7] and enabled the werewolf to smell if someone was afraid.[6] Nina showed increased hearing as well, and craved meat.[5] Werewolves could perceive the presence of other werewolves[8] and had a primal, physical attraction to one another.[9]

The psyche of a newly-bitten werewolf remained separate between the human self and the feral side. The traumatic and painful experience of the transformation caused the werewolf to lose memory of it, until some sort of evidence provided conscious knowledge of the person's condition, such as waking up naked in a different place from the one in which the transformation took place.[1][5]

Even after the werewolf acknowledged its condition, he or she retained no memories of whatever action they might have taken during the transformation.[9] The lupine beast, completely dominated by instinct, was incapable of recognizing loved ones or friends.[1][7][9][10][11][12] It did, however, retain some of its intelligence, being able to recognize certain words and reacting to them, often violently.[10] The wolf side also exerted influence on the basic instincts and impulses of the werewolf while in human form.[5][9]

As the time a person has been a werewolf lengthened, he or she would begin to retain memories of the time spent in wolf form.[9] Prior to this phase of the werewolf's life, it was also possible for the werewolf to exert certain influence on its actions during the feral phase.[9]

Silver was the most effective way to kill a werewolf,[5] but other severe injuries were enough to do the job as well: Oz was able to kill Veruca by tearing into her throat with his fangs, and during the battle against Twilight's army members of Monroe's pack were seen lying dead with (regular) bullet wounds riddling their chest. Like vampires, werewolves could be affected by drugs (such as Haldol[7]) and tranquilizers (such as Phenobarbital[1]), although the exact dosage required for both cases was never specified. A tranquilizer meant for Oz was once used on Giles without any lasting ill effect,[10] so whatever the dosage was, it wasn't lethal to humans. Tranquilizers were sometimes employed to restrain free-roaming werewolves without injuring them.[1][5]

The werewolf curse was impossible to cure as a whole: once a person had been bitten, he or she could not be unmade a werewolf. However, it was possible to control the transformation. During his first visit to Tibet, Buddhist monks taught Oz meditation techniques that they combined with herbs in his diet, along with chanting and charms. After this he was able to roam about under a full moon in apparent ease and comfort. However, with this technique intense negative stimulation such as great physical pain or overly stressful social situations could trigger the transformation, even during the day.[7]

Returning to Tibet a second time, Oz and Bayarmaa found a more wholesome way to refrain from turning into a werewolf during the full moon, based on the original Tibetan religion Bon. This time, rather than bottling up the wolf, they allowed the energy of it to flow out of them and into the world around them: "the wolf is pulled into the earth." This technique took about a year to get right and consisted, among other things, of connecting with the land with their own mortal bodies. Later it was revealed the necessary chants that were part of the method were actually an invocation of wrathful goddesses Ekajati, Remati, and Vajrayogini dwelling deep inside the earth, who accepted the werewolves' offering of their power in exchange for the deities' protection.[4]

While some werewolves tried to hold their animalistic impulses in check, other werewolves believed that their human side was merely a disguise, a cage for their true selves, and did not restrain in any way. Whether a werewolf chose to embrace its condition or not depended on a number of social and psychological factors and couldn't be solely blamed on the influence from the bestial side of the werewolf psyche.

On the side of humans, reaction to the existence of werewolves was extremely varied:

The more common werewolf was smaller, with a heavy coat of fur, and while still very dangerous, didn't have a large mouth or canine set of teeth. The Lycanthropus exterus on the other hand walked on two legs, had longer, more powerful arms, was larger, and sported a more canine-like head and fangs.[5]

"Beauty and the Beasts" 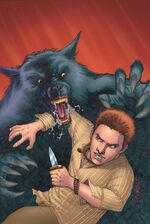