"Welcome to the Hellmouth" is the season premiere of the first season of Buffy the Vampire Slayer television show, and the first episode in the series. It was written by Joss Whedon and directed by Charles Martin Smith. It was originally broadcast on February 7, 1997.

Buffy Summers arrives in Sunnydale and is not happy to meet her new Watcher, Rupert Giles. Angel, a mysterious friend, offers guidance, but Buffy resists her destiny until Willow and Jesse are abducted.

A boy breaks a window at Sunnydale High School at night and crawls in, followed by a seemingly reluctant girl. The girl hears an unidentified sound and fears something is there. The boy calls out but gets no response. When the girl is satisfied they are alone, her face morphs into that of a vampire, and she bites the boy. The girl, as it’ll later be revealed, is Darla.

Buffy has a nightmare the morning of her first day of school. Her mother, Joyce, drives her to the school and encourages her to think positive. Inside the building, Principal Flutie tells her she will start with a clean slate. He reconsiders that after realizing that Buffy burned down her previous school’s gym because “it was full of vampi– …asbestos.”

Buffy exits the office and bumps into another student, spilling the contents of her purse over the floor. Xander sees that and helps Buffy, introducing himself. She leaves without her stake, which Xander pockets because he called out to her, but she had already walked away. In history class, Buffy is helped by Cordelia, who afterward tests her “coolness factor”, allowing Buffy skipping the written as Buffy had just moved to Sunnydale, California from Los Angeles. To Buffy’s horror, Cordelia humiliates an awkward Willow at the water fountain. Inside the library, Mr. Giles places a book titled Vampyr in front of Buffy after realizing who she was. A stunned Buffy makes a hasty exit.

Buffy, Willow, Jesse, and Xander meet during a break, and Xander returns the stake. Buffy claims it’s standard self-defense in Los Angeles. Cordelia appeared and told Buffy she won’t get to meet Coach Foster because gym class was canceled “due to the extreme dead guy” in Aura’s locker. Buffy asks whether there were marks on the body, freaking out Cordelia. Buffy forces her way into the locker room, examines the body, and finds the characteristic puncture wounds of a vampire on the neck.

That night, en route to her first visit to The Bronze, the cool hangout in Sunnydale, Buffy is followed by a mysterious man. Feeling threatened, she knocks him down. However, the handsome stranger assures her that he doesn’t bite and she releases him. He warns her that she is living on a Hellmouth which is about to open and that the Harvest is coming. He also gives her a large silver cross. It isn’t revealed until the next day that the stranger’s name is Angel.

In The Bronze, Buffy meets Willow and encourages her to seize the moment because tomorrow she might be dead. She finds Giles and tells him about Angel. Giles tells her to learn to hone her skills to sense vampires anywhere. Buffy uses her fashion sense to pick out a vampire in the club and is alarmed to see Willow leaves with him. She loses them and is surprised by Cordelia, nearly staking her. Cordelia immediately calls her friends to tell them about it. While Buffy looks for Willow, Jesse chats up Darla at The Bronze. Buffy is stopped by Xander, who doesn’t believe in vampires and makes fun of her. In the end, she manages to convince him to help search for Willow.

Willow’s new acquaintance takes her to a crypt in a cemetery, where they are joined by Darla and Jesse, whom she has bitten. Buffy and Xander arrive. Buffy kills Willow’s vampire. Xander and Willow help Jesse, who has been weakened, flee. Luke takes Darla’s place in the fight so she can help catch the kids. Luke throws Buffy in a stone coffin and is about to move in for the kill. 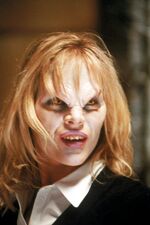 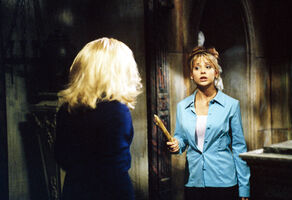 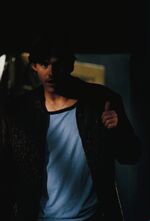 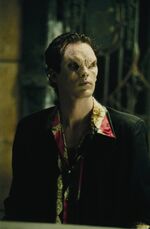 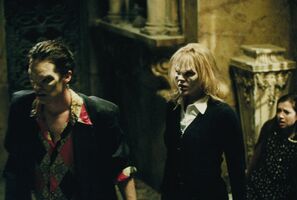 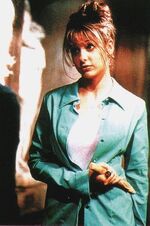 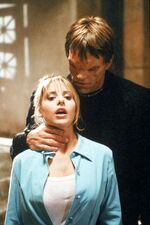 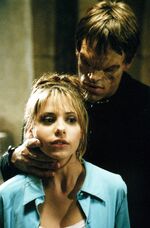 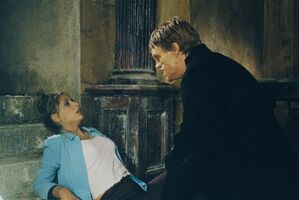 “For each generation, there is only one Slayer.”
Add a photo to this gallery

Retrieved from "https://buffy.fandom.com/wiki/Welcome_to_the_Hellmouth?oldid=184972"
Community content is available under CC-BY-SA unless otherwise noted.