"I Was Made to Love You"

Katrina: “How could you say you loved me, and do that to me?”
Warren: “Because you deserved it, bitch!”
— Katrina Silber and Warren Mears[src]

Warren Mears was a technological genious and one of the most notable enemies of the Scooby Gang. He built several humanoid robots, including his own personal girlfriend and a copy of the Slayer, Buffy Summers. Warren and his friends Jonathan Levinson and Andrew Wells formed the Trio, an evil league of super villains who plotted to kill Buffy Summers and take over Sunnydale.

Although relatively harmless at first, Warren eventually showed his true colors as a misogynistic killer, attacking his ex-girlfriend and killing her in the process. After accidentally killing Tara Maclay, Warren was flayed alive by Willow Rosenberg. Seconds later, Amy Madison saved his life, using magic to preserve him in a skinless, undead state. Warren and Amy then aligned themselves with the U.S. Military and Twilight in order to get revenge on both Willow and Buffy. After being ousted from the Twilight Group and participating in the battle for the Seed of Wonder, Warren met his final end after Buffy destroyed the Seed and brought about the end of magic.

Willow: “I'm just saying, people get lonely, and maybe having someone around, even someone you made up... maybe it's easier.”
Tara: “But it's so weird. I mean, everyone wants a nice normal person to share with, but this guy, if he couldn't find that, I guess it's... kinda sad.”
— Willow Rosenberg and Tara Maclay empathize with Warren's creation of April.[src]

Warren grew up in Sunnydale, California. In school, he excelled in science and technology,[2] but was bullied by his peers, including a jock named Frankie.[3] As a teenager, he attended Sunnydale High for a semester before moving on to a tech college in Dutton. However, he continued to be plagued by loneliness and began to apply his technological skills to solve the problem. Warren built an ideal robot girlfriend named April, who was programmed to love and obey him. He assumed that he would love her in return, but grew bored of how easy and predictable things were with her. Instead, he met and fell in love with Katrina Silber, a strong-minded girl in his engineering seminar, and the pair began dating. However, Warren was unable to bring himself to break up with April, so he went home for spring break without her, hoping that her batteries would run out.[2]

April followed Warren and Katrina to Sunnydale, where she proceeded to question everyone she met about Warren's whereabouts. This caught the attention of the Scooby Gang including the Slayer, Buffy Summers. When April's behavior grew erratic and violent, Buffy tracked Warren down and confronted him. He explained that April must have been recharging her batteries somehow, and Buffy became concerned about the danger she posed. When Katrina told April that Warren was her boyfriend, the robot angrily attacked her. Buffy and Warren showed up just in time to save her life. Warren admitted to April that he didn't love her, and she reacted violently. As she and Buffy began to fight, Katrina realized that April was a robot and left Warren in disgust. He ran after her, leaving Buffy to deal with April, whose batteries finally ran out. Warren was later approached by the vampire Spike, who harbored a romantic obsession with Buffy.[2] Spike forced Warren to build a robotic version of the Slayer for him to have sex with.[4]

Warren resurfaced [5] as part of the Nerd Trio, along with Jonathan and Andrew. The Trio were little more than a criminal group who strove to take over Sunnydale, though most of their plans revolved around neutralizing Buffy, who, as the Slayer, was the one thing standing in their way.

Despite his previously passive tendencies, Warren was clearly the leader of the Trio, dominant over Jonathan and Andrew, as well as more willing than the other two nerds to take real risks and possibly do real harm to people.

Warren showed his true colors as a dangerous, misogynistic individual. When Katrina reappeared, Warren used an enslavement device to make her obey his will. When she resisted the device, Warren attacked and accidentally killed her. Unmoved, he hatched a scheme using demons that cause temporal disturbances to confuse Buffy into thinking she was responsible for Katrina's death. His plan nearly succeeded, but just as Buffy was about to turn herself in to the police, she overheard them identify Katrina's body and immediately realized the truth, subsequently vowing to bring Warren to justice[6].

After Katrina's death, Jonathan became increasingly unhappy with Warren's lack of conscience. Warren plotted with Andrew, who was enamored with him, to ditch Jonathan. Additionally, Warren began to dominate his teammates, reserving the usage of any scientific devices and/or mystical artifacts they created or acquired for himself.

Warren made a bid for major villain status when he stole a pair of magical orbs which gave him strength and invulnerability. He, Jonathan and Andrew attempted to rob an armored car, but Buffy arrived and the two fought, during which it was clear that Warren's Orb-granted strength made him more than a match for the Slayer, even taking the time to gloat that he had finally defeated the Slayer, something that many had tried (and failed) to accomplish in the past. In the midst of the fight, Jonathan appeared to attack Buffy, but in fact surreptitiously told her how to defeat Warren. Just as Warren had Buffy at his mercy and was about to finish her off, Buffy saw the pouch containing the orbs and destroyed them. As a contemptuous Buffy advanced, an enraged and humiliated Warren escaped with a jet pack, vowing that he would take Buffy down, and left Jonathan and Andrew to take the fall with the police.

The next day, Warren, furious that Buffy had foiled his plans again, appeared in Buffy's back yard with a gun. He shot, hitting Buffy, who only survived thanks to Willow's intervention, and accidentally killing Tara with a stray bullet. Willow, pushed by grief into dark magics, became Dark Willow. Upon discovering that Buffy had survived his assassination attempt and that Willow was after him, Warren immediately traveled to the hideout of sorcery dealer Rack, who supplied him with protection spells. Unfortunately, these were not enough to stop Willow, who eventually had Warren at her mercy. Although Warren desperately attempted to reason with Willow, his pleas fell upon deaf ears when Willow discovered that he was indeed responsible for Katrina's death. Willow tied him up with various tree branches and tortured him with the bullet she had extracted from Buffy's body, slowly forcing it into his chest before growing bored with him and telekinetically flaying him alive in front of her friends, before going on a rampage to kill Andrew and Jonathan (despite them not being involved).

The First Evil appeared as Warren, using his appearance mainly as a means of bending Andrew to its will. Using this method, the First Evil manipulated Andrew into murdering Jonathan[7], in order to open the seal in the basement of the new Sunnydale High.

A spell, cast by Amy, caused Willow, feeling guilty over moving on after Tara's death, to manifest her feelings by making her outwardly assume the appearance of her former victim. Additionally, Warren's personality began to overtake Willow's, causing her to slap Amy across the face while calling her a "dumb bitch" and buy a handgun with the intent to kill Buffy. However, with Kennedy's help, Willow was able to work through her grief and guilt and break the spell.

The real Warren, however, returned months after the destruction of Sunnydale. Seconds after he was killed by Willow, Amy used her magic to keep Warren "alive" despite his lack of skin. He was the one who gave Amy the idea of cursing Willow in order to become him, and he bore a considerable grudge against both Willow (for flaying him) and Buffy (for ruining all of his schemes).

Amy and Warren remained in the remnants of Sunnydale after the massive exodus and were present during the town's destruction. They remained for months in the crater, feeding on whatever edible substance they could find, until they were found by General Voll. In exchange for their aid against Buffy and the Slayers, Warren asked for a chance to exact revenge on Willow. He revealed the means of his survival as he lobotomized a captive Willow. When Buffy and Satsu arrived on a rescue mission, Amy teleported away, taking Warren with her. Willow healed instantaneously.

Twilight was seen with Warren and Amy in some sort of military base, where Warren showed him something that would help get Twilight's job done: a missile, which targeted and destroyed the Scotland castle headquarters, with Xander looking on nearby, helplessly.

While on the run from demons with his Italy squad, Andrew discovered a bleeding and skinless Warren underground who claimed to have been abandoned by Amy to die slowly as his magical skin wore off. Warren pleaded and seemed to take responsibility for some of the First's claims while under his guise, such as the instruction to kill Jonathan. However, this turned out to be a ruse as the goatmen demons descended and Andrew and his Slayers were forced to fight back and retreat to the Scotland Slayer Organization headquarters. Amy interrupted his ruse on purpose, believing it doomed to failure because it was the First who tempted Andrew before and Warren was "not the First."

After being betrayed by Twilight and discovering his identity, Amy and Warren allied themselves with the Scoobies, and joined them in the fight for the Seed of Wonder in Sunnydale before being let go by General Voll. After traveling to Venice, Amy pondered over going back to help the Scoobies, but Warren adamantly refused, reminding Amy that Buffy and Willow are "the enemy." After Buffy destroyed the Seed and all magic, Warren, without Amy's magic to keep him alive, collapsed into a puddle of blood and bones.

Although Warren displayed no independent supernatural powers, he did possess a genius-level intellect, especially in the fields of technology and robotics. He was capable of building highly advanced robots which can easily pass for ordinary humans; even vampires, with their enhanced senses are incapable of differentiating the robots that Warren made from actual people, though their mannerisms and speech patterns were stilted and imperfect by human standards. The Buffybot he built successfully masqueraded as Buffy Summers for several weeks when the real Slayer was dead, even fooling Buffy's friends and family. Some of his other creations, which fuse magic and technology, included an Invisibility Ray [8]; a Freeze Ray [9]; a small microchip capable of slowing time [10]; a Cerebral Dampener, which stripped the will of any female within its range, rendering her a slave [6]; and at least two jet packs [3]. He also displayed enough knowledge of biology to perform a lobotomy [11].

Warren gained the power of the Orbs of Nezzla'khan, two orbs which grant him superhuman strength and invulnerability, respectively. In this state, he was more than a physical match for Buffy and easily overpowers her, until Jonathan betrayed him by telling her to destroy his orbs. During this time, he merely fought with sheer brute force, as opposed to the advanced martial arts skills that Buffy commonly employed.

Warrenorbs.png
Warren absorbing the powers from the Orbs of Nezzla'khan 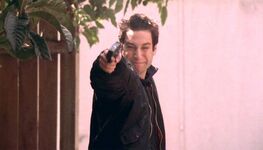 Retrieved from "https://buffy.fandom.com/wiki/Warren_Mears?oldid=123052"
Community content is available under CC-BY-SA unless otherwise noted.