Start a Wiki
"Waiting in the Wings" is the thirteenth episode of the third season of Angel and the fifty-seventh episode overall. Written and directed by Joss Whedon, it was originally broadcast on February 4, 2002 on the WB network.

Wesley researches a demon from one of Cordelia's visions while Cordelia questions Wesley about his romantic feelings towards Fred. After Gunn and Fred return from breakfast, Angel announces he is taking them all to a production of the ballet Giselle, performed by the Bllinikov School. Gunn is horrified, since Angel had originally gone out to pick up tickets for one of his favourite bands and tells Angel they've 'lost the trust'. He says he saw the same ballet performed by the same company in 1890, which made him cry like a baby... which was quite a feat, considering he was still evil back then.

At theater, the company's owner, Count Kurskov, promises theater manager an unforgettable show while a shadowed figure watches from above the stage and laughs.

In preparation for their glamorous night at the ballet, Fred and Cordelia shop for new dresses, where Cordelia teaches Fred about the ancient custom of buying an expensive dress, hiding the tag and returning it the next day. Cordelia broaches the subject of Fred's romantic interests. Cordelia thinks Fred's mind is on Wesley, when it's really on Gunn, and tells Fred the feeling is mutual. Lorne informs Angel that he knows about the vampire's feelings for Cordelia . Angel initially denies it, but Lorne reminds him that Cordelia has grown into an amazing woman (and also jokingly points out that Angel seems to have a thing for ex-cheerleaders). Angel is unsure of if he should persue her, considering he doesn't feel he has anything he can offer her. Lorne tries to talk him round, telling him that moments like this don't come around very often and he should act on his feeling. Then Cordelia, looking amazing in her dress, arrives and tells Angel that she hopes to leave behind their regular lives (well, regular for them anyway) and enjoy an evening of classical dance. Angel can only agree.

Compliments are directed to everyone as their attire is revealed at the hotel, and they depart together. At theater, the gang find their way to their seats and Angel grumbles at the distance between their seats and the stage and remembers how, in the past, getting a box seat was only a good meal away. The show begins and Cordelia is literally and almost instantly bored to sleep while Gunn finds himself enraptured with the performance. Angel, as he watches, begins to get troubled at the sight of the dancers. During intermission, Angel tells his friends that the show is the same as the one he saw in 1890... and he means exactly the same, with the same dancers. Angel knows the dancers aren't vampires, so the gang decide to investigate. He and Cordelia sneak backstage, where they discover they are mystically trapped in a maze of corridors.

Looking through the Prima Ballerina's dressing room, Angel observes that the dressing room hasn't changed in two hundred years as Cordelia examines a cross necklace from a table. Both feel the room warm, and Cordelia suddenly asks Angel to undress her. Soon they find themselves possessed by spirits in love and are unable to keep their hands off each other, until Cordelia accidentally burns Angel with the cross. Both come to their senses and leave the dressing room before things go too far.

Worried, Fred encourages the guys to help her look for the missing Angel and Cordelia (although Gunn, loving the show, is practically dragged away). The Count directs his demon minions to deal with those sneaking around backstage. While trying to escape the backstage halls, Cordelia recalls an element of fear she felt while possessed. She convinces Angel to reenter the dressing room so that they can break the spell holding them backstage, where they are possessed by the spirits again with wild passion for each other. Cordelia calls Angel "Stefan" and confesses her fears of another man who is controlling her life. They kiss, and "Stefan" offers to take her away, but she wants him to help her deal with the problem instead. As Fred tends to a wound Gunn received in the battle with the Count's minions, he jokes about his injury, and Fred gets emotional because she thought he was seriously hurt. The two kiss as Wesley quietly discovers them and walks away sadly.

The ballet continues on stage as the gang gathers backstage. Wesley explains that the Count was a wizard who discovered the prima ballerina whom he adored had a lover. To repay her for her betrayal, the count forced her into a temporal shift where she would dance for only him, forever. As Angel searches for the Count's power center, he finds the prima ballerina waiting in the wings, resigned to perform the same dance for the rest of eternity regretting she didn't leave when Stefan urged her to. Meanwhile, the rest of the gang weaken the Count's magic by fighting off the Count's demons, who multiply whenever they're killed.

The Prima Ballerina sadly tells Angel that during the first act, her foot slips a little every time during the courtship dance... she's not dancing each night, but rather just repeating her movements again and again for eternity. Angel tells her to break the magic holding her prisoner, she has to change the dance. She dances on stage using her own steps. Angel attacks the Count and, guessing the power center is in a medallion the count wears, smashes it with a powerful punch, finally releasing the ballet dancers. The Prima Ballerina, knowing she's has been released from her eternal curse, bows to Angel in thanks as she vanishes. The Count tells Angel he has no right to do this, the Prima Ballerina was his and danced only for him... but Angel isn't interested and knocks him out. Wesley dresses Gunn's injury and watches on in emotional agony as Fred and Gunn exchange loving looks.

Angel and Cordelia agree to forget whatever happened between them while they were possessed. Angel starts to admit his true feelings for Cordelia, but the Groosalugg from Pylea appears on the stairs, drawing Cordelia's attention away from Angel. Groo and Cordelia kiss as Lorne comes downstairs to inform Angel that Pylea has formed a republic; with no need for a leader, Groo returned for his true love, Cordelia. Dejected, Angel goes upstairs to check on Connor while Fred and Wesley watch on, both realizing the path of love is not something that can be foretold. 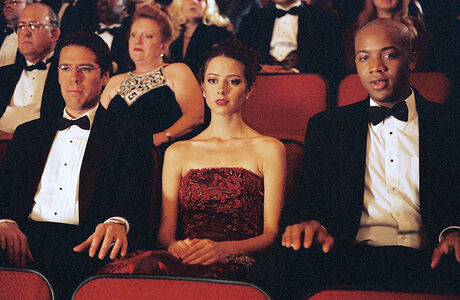 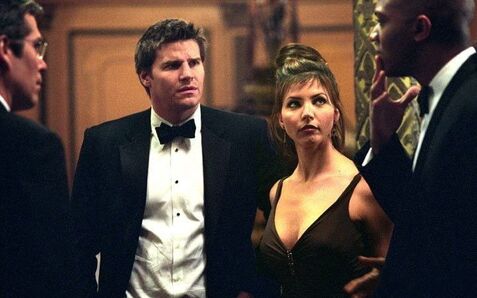 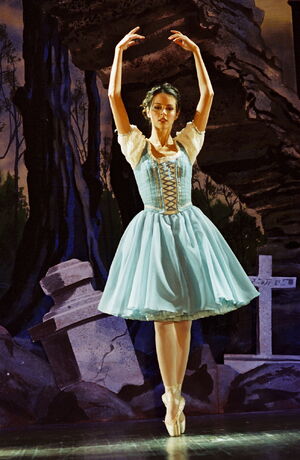 Retrieved from "https://buffy.fandom.com/wiki/Waiting_in_the_Wings?oldid=223867"
Community content is available under CC-BY-SA unless otherwise noted.