"Viva Las Buffy!" is the seventeenth volume of Buffy the Vampire Slayer Classic trade paperbacks, collecting issues fifty-one to fifty-four of the comic book series. It was originally published on July 2, 2003 by Dark Horse Comics.

It's 1996, and Buffy Summers has just accepted her role as the Vampire Slayer. After the destruction of her high school, she flees to Las Vegas to sort out her life, but there's more than Wayne Newton and hookers in the city of sin. A twisted coven den of vampires has big plans for the strip.

Dark Horse takes you where the TV show never did, back to Buffy's roots, in the summer before she arrived in Sunnydale. And there's a tall, dark, and handsome stranger keeping an eye on her during those dangerous nights in Vegas. 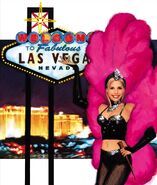 Cover in Italy
Add a photo to this gallery

Retrieved from "https://buffy.fandom.com/wiki/Viva_Las_Buffy!?oldid=207576"
Community content is available under CC-BY-SA unless otherwise noted.