The Slayer is being stalked...

Visitors is a Buffy the Vampire Slayer novel. Written by Laura Anne Gilman and Josepha Sherman, it was originally published in April 1999 by Pocket Books.

The paranormal forces centered in Sunnydale attract the vilest kinds of evil: vamps, demons... and student teachers? An invasion of collegians testing their teaching prowess on Buffy and her peers coincides with the arrival of a supernatural stalker. The Slayer feels the evil entity watching her every move, and she's not the only one. But researching the beast is going to be problematic with the student teachers setting up shop in Giles's home turf — the school library.

When the stalker starts to take his malicious game to the next level, Buffy finds herself face to face with a being unlike any she's ever encountered. But can she figure out its weakness before she is forced to participate in its dance of death? 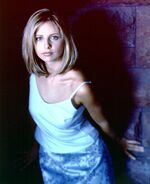 Cover in the Netherlands

Cover in Russia
Add a photo to this gallery
Retrieved from "https://buffy.fandom.com/wiki/Visitors?oldid=226037"
Community content is available under CC-BY-SA unless otherwise noted.