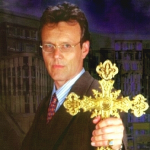 I would even call it an Amulet before anything else. lol Sorry.. I would have to agree that it should remain as titled "amulet", mainly because that is how the fans have come to know it. Sort of like (if you are familiar with Game of Thrones).... Jon Snow's real name is now Aaegon... but we aren't going to change his article/page to that name, as he'll always remain "Jon" since that is how fans know him. I would keep the article as Anya's Amulet, but reference that is is definitely her power center and we know that as fact. But the item itself, the jewelry is an amulet. Hope that helps some. QueenBuffy

Well thank-you for that. It IS a better solution than "Symbol".

Thanks for your time.

When leaving a message and other little tid-bits... Edit

When you leave a message on talk pages, make sure you title it/subject headline it... otherwise, it gets jumbled in with the message above it and it doesn't keep things in order. Also I noticed you are most likely in England? On this wiki we use the American version of spelling (since it's an American series).. it just keeps things cohesive. I'm not sure if anyone has told you this yet, so thought I'd go ahead and mention it. :) No big deal, just wanted to give ya a heads up. :D Thanks for all your work. QueenBuffy

When you put a behind the scenes fact about a catalog item... can you reference the article, where it states the dagger was found in a catalog? Otherwise, it's hard to know if that is fact or not. Thanks. QueenBuffy

The more generalized term is "found" which refers to any prop seen on screen that was not made specifically for the show. Examples are Faith's Knife, Buffy's Nnnrff and The Dagger of Lex. It's a known fact that all these knives and most of the swords seen on the show were purchased from catalogs for the show (Even Anya's Amulet was a "found" item)

Right, but what I am saying is... the weapons were probably made by the people at Buffy, and replicas were later sold in catalogs and online. See what I mean? It sounds like in the article you are saying, people from Buffy bought the weapons in a catalog, and then either used them in the show, or changed them up a little. We just need a reference to figure out what you're trying to relay here. :) QueenBuffy

"the weapons were probably made by the people at Buffy, and replicas were later sold in catalogs and online.":Um...yeah, except that's not how they did it. I don't know how to make it any clearer than it already is.

"Found Item" (A term used in the film and stage business) refers to Prop People from the show buying something that's already made . Even the Hunga-Munga was purchased from a Kung-Fu Magazine.
But the best and most notable example is undoubtedly Faith's Knife.
Faith's Knife is KNOWN to be a "Found item" because it was made prior to Buffy FOR the general public; the Jackal, which was designed by Kit Rae (I know that because he told me so himself) for Gil Hibben who sells them. The exact same knife can be seen used on Star Trek as a Klingon Dagger or in the star trek movie Nemisis where it was used as a Romulan Dagger.
The knife had the look they wanted so they purchased one (from a catalog which at the time was quite common because the Internet had not taken off yet and on-line purchasing wasn't widely available) and made casts of it to use in various forms.
Due to money and time constraints it's always cheaper for a studio to buy something ready made than to make it from scratch or have it made from scratch specifically for the show as was the case with The Slayer Scythe.
I can point out object after object that was purchased from a catalog for use on the show.
Perhaps I should create a page titled "Found Item" so that it can be referenced?
P.Edward Smith/BuffyProps (talk) 20:05, December 11, 2017 (UTC)

Retrieved from "https://buffy.fandom.com/wiki/User_talk:BuffyProps?oldid=173450"
Community content is available under CC-BY-SA unless otherwise noted.