"Bug Demons" were an insect-like, parasitic species of demons.

Angel Investigations attracted the attention of these demons in L.A. in 2001 when Angel keep the head of a Durslar Beast that was planted with their offspring. A "Bug Demon" attacked them at the train station before Trish Burkle ran over it with a bus. A whole swarm then attacked them at the Hyperion Hotel. Luckily, Winifred Burkle arrived and used her own contraption to bisect the Durslar's head, revealing the offspring. Seeing this, the demons collected their children and left.

Adult "Bug Demons" were tall insects with compound eyes, green-grey skin and four legs supporting an errected torso with long, sharp appendages for arms. Their children resembled regular-sized cockroaches. The eyes of the adult glow purple in the dark. Although their visual field appears hazy, they could track prey with accuracy. These demons possibly reproduced by planting their offspring in the cranium of other demons. Their blood is thick purple in color. Their excrement solidified and appeared as clear and violet crystals.

Fred theorized that the Bug Demons acted as a hive-mind. In addition, she also proposed that the demons had no gender and thus, had equal roles in producing and protecting their young, thus explaining why the whole swarm went after the decapitated Durslar beast head which contained the young Bug Demons. 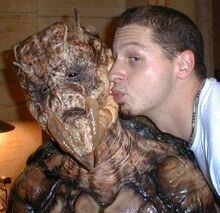 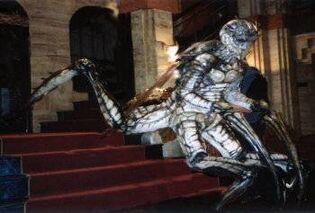 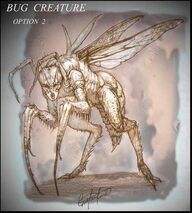 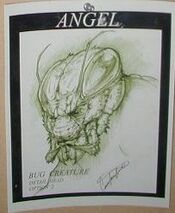 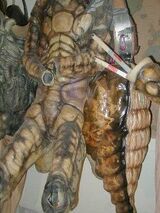 Retrieved from "https://buffy.fandom.com/wiki/Unidentified_bug_demon?oldid=201702"
Community content is available under CC-BY-SA unless otherwise noted.