"Underneath" is the seventeenth episode of the fifth season of Angel and the 105th episode in the series. Written by Sarah Fain with Elizabeth Craft and directed by Skip Schoolnik, it was originally broadcast on April 14, 2004 on The WB network.

Hoping that Lindsey has information on the Senior Partners' ultimate plans, Angel, Spike and Gunn track him down in a bizarre and terrifying suburban hell. Meanwhile, a nearly invincible stranger sent by the Senior Partners infiltrates Wolfram & Hart looking for Eve.[1]

Angel is alone in a conference room, impatient because he's called a meeting and no one else is there. Harmony explains that Wesley is babysitting Illyria, Gunn is still in the hospital, and Lorne is in parts unknown. Spike enters with a briefcase, wanting to take part in his first meeting with the group. Angel starts filling him in and Spike pulls out a beer. He wonders why he's always on reconnaissance and mentions that he'd rather have a rescue mission with a girl. Angel remembers Fred saying "handsome man, saved me from the monsters" in Pylea and regrets bringing her to Los Angeles. He thinks he's been lying to himself about making the world a better place. Angel and Spike discuss the supposedly impending apocalypse and Angel says that the Senior Partners are planning something. He doesn't want to sit around and wait for them to do something, so Spike suggests finding a link to them.

Lorne reads a bartender at Caritas then admits that he's sick of being cheerful all the time. He says that he's stopped telling people the truth and instead has been telling them what they want to hear. He started drinking a lot after Fred got sick, but now he's realized that he's not accomplishing anything, so he's going to go back to Wolfram & Hart and pretend that he can help.

Angel and Spike take Eve to the firm, where Angel beefs up security, then goes to see Gunn. Angel tells him what's going on and asks if he has jurisdiction to protect Eve. Gunn says that he doesn't know and Angel reminds him that he paid a big price for the legal knowledge he has, so he should put it to good use. Gunn finally tells him that as CEO of Wolfram & Hart, he can invoke an order which will let him take care of Eve. Angel tells Gunn that he knows he feels bad about what happened to Fred, and he should, because he's a good person and tries to remind Gunn that he only signed a piece of paper and didn't know what would happen. Gunn admits that, while he didn't know about Fred, he knew that there would be consequences. Angel tells Gunn that they'll always be chances for him to atone for what happened, but he needs to take them instead of hiding in his hospital bed.

In Fred's apartment, Wesley has a dream about her, in which she tells him, "This is only the first layer. Don't you wanna see how deep I go?" When he wakes up, Illyria is with him. They both note that they don't like the world much and she wonders why he's still in it.

Back at the firm, Eve isn't too confident that the Senior Partners won't find her, even though Angel assures her that she's under his protection. He asks her about her job and she replies that she's "a child of the Senior Partners, created to do their bidding." Angel notes that she's immortal and asks what the Senior Partners are. Eve claims not to know, saying that she's on a need-to-know basis with them. She says that Lindsey could have given them more info, but they lost their chance. She adds that he knew more about Angel than Angel does, but the Senior Partners sent him to a hell dimension instead of killing him. Meanwhile, Lindsey wakes up with a wife and son in the suburbia. He goes out to get the morning paper and pick up his son's skateboard.

Back in Angel's office, Spike talks about the different hell dimensions. Angel isn't sure they can believe Eve, but Lorne says that she was being sincere when he read her. Angel wants to know what Lindsey knows about the Senior Partners, but Spike points out that they'll have a hard time figuring out which hell dimension Lindsey is in. Gunn arrives, no longer in a suit but now wearing his street clothes again, and announces that he knows which one Lindsey's in and can get them there.

In suburbia, Lindsey helps his son with his homework, studying the various layers of the Earth. His wife tells him that the oven light went out and she needs him to go to the basement to get a new bulb. Lindsey reluctantly heads downstairs, scared of something.

Angel, Spike, and Gunn head to the garage as Gunn explains that a previous Senior Partners case is similar to Lindsey's, so Lindsey must be in the same place the other guy was. He says that he's actually in a Holding Dimension, which is more like a penalty box than a hell dimension. Angel, Spike, and Gunn get in a Camaro that drives itself. Gunn says that, when they arrive, they have to find the Wrath, which they have to go through to get back to Wolfram & Hart. The Camaro emerges from a tunnel into daylight in suburbia.

Wesley and Illyria continue talking, and she mentions the dimension that contains nothing but shrimp, noting that she "tired of that one quickly."

Lindsey begins his day in suburbia again, picking up the paper and skateboard as he did before. The Camaro arrives and Gunn has to remind Spike and Angel that, in alternate dimensions, they're not affected by the sun. They head to Lindsey's house, but Lindsey doesn't recognize the three of them. They try to explain that Lindsey is under a spell, but Lindsey thinks they're playing a trick on him.

At Wolfram & Hart offices, Eve worries that Lindsey won't come back. Lorne reminds her that no one can harm her, since she's under Angel's protection. Eve says that the Senior Partners won't honor that arrangement. Lorne tells her that no one can get into the building, but a security alarm goes off. The man in the suit arrives, kills a guard, and heads for Angel's office.

In suburbia, Lindsey tries to kick Angel, Spike, and Gunn out as they tell him that he's coming with them. Angel notes that he's wearing a necklace, so he pulls it off, breaking the spell. Lindsey tells Angel to make it quick, thinking he's going to kill him, but Angel says he's not going to kill him. Before they can leave, Lindsey's wife arrives and opens fire with a submachine gun. Angel sends Spike, Gunn, and Lindsey to the car, then starts fighting the wife. However, the Camaro is gone. An ice cream truck pulls up and the driver starts shooting them, soon joined by the mailman. Spike, Gunn, and Lindsey head back to the house. Lindsey's son joins in the gunfight as Gunn tries to figure out where the Wrath is. He suggests trying to get out through the basement, but Lindsey doesn't want to go back down there. The four guys head to the basement anyway.

At the Wolfram & Hart, Harmony grabs the man in the suit and tries to breaks his neck, but he's impervious to it. Eve and Lorne take off for the elevator, but the man throws Harmony off and heads after them.

In the dungeon-like basement, Spike finds a pile of hearts, which Lindsey says are his. Angel finds a huge flaming furnace and thinks it might be the Wrath. Lindsey notes that "he" is coming, and the guys see a demon approaching. Angel and Spike fight the demon and start to head for the furnace. Gunn puts on Lindsey's necklace and says that he's doing "what needs to be done." Angel refuses to leave him behind, but Gunn says, "You don't make the rules here. Wolfram & Hart does. If one leaves, one has to stay. A void is impossible." Angel realizes that Gunn came along because he knew about this and wanted to do something to atone for Fred's death. Angel, Spike, and Lindsey head through the furnace, and, once the gate closes, Gunn has completely taken Lindsey's place.

Lorne and Eve run to Angel's garage and have trouble matching up a set of keys to a car. They finally make a match, but, before they can drive off, a portal opens above them, and Angel, Spike, and Lindsey land in the car. Eve is thrilled to see Lindsey, and the five of them start to go back inside. Lorne starts to warn Angel about the guy in the suit, but he realizes that Gunn hasn't returned. Angel tells him that they left him behind, despite their past agreement to never leave someone behind. The man in the suit arrives and Angel notes that, as Lorne said, he is well-dressed.

Angel tries to convince the man in the suit that Eve is under his protection, but he pulls out her contract and has her sign it. He introduces himself as Marcus Hamilton, their new liaison to the Senior Partners. Eve has just signed over some privileges, her immortality, and her duties to him. Angel notes that Eve said that she was going to die; she notes that now she will someday. Hamilton tells Angel that the Senior Partners are 100% behind him, then says that he's happy to be a part of their team now.

Meanwhile, Illyria and Wesley continue talking, now on the roof of Wesley's building looking at the lights of Los Angeles at night.

In Angel's apartment, Lorne pulls bullets out of Angel, and next Spike's back as Lindsey and Eve cuddle, happy to be back together. Lindsey wonders how Gunn will handle the suburbia hell, gloating that he's out of there. Angel tells Lindsey that, just because he released him from the suburbia hell dimension, Lindsey is not free to leave: he will go into the holding facilities of Wolfram & Hart after he tells Angel and the group what he knows about the Senior Partners and what their plans are. Lindsey talks about Earth being Hell by itself, which is how Wolfram & Hart works and thrives.

Angel says that he's already heard that speech three years ago from Holland Manners. Lindsey asks, "Did you ever prove him wrong?" He tells Angel that the apocalypse has been here around them all along even before Angel and his friends came to work at Wolfram & Hart, and Angel just hasn't seen it. "Heroes don't accept the world the way it is," Lindsey says. "Heroes fight." Angel notes that everything they've been doing at Wolfram & Hart has been a distraction by the Senior Partners to keep them from looking under the surface and seeing what's coming. "The war's already here, Angel," Lindsey tells him. "And you're already two soldiers down."

In the holding dimension, Gunn helps his son with his homework, discussing the layers of the Earth. His wife sends him to the basement for an oven bulb, but he's reluctant to go. 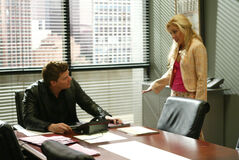 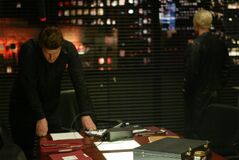