Ugly Little Monsters, Part Two is the forty-first issue of the Buffy the Vampire Slayer Classic series. Written by Tom Fassbender and Jim Pascoe, and illustrated by Cliff Richards, it was originally published on February 6, 2002 by Dark Horse Comics.

After more than a year, Tara STILL doesn't feel like she's fitting into the Scooby Gang. The closer she gets to Willow, the more envious she is of the friendship between Will and Buffy and Xander. With all this jealousy in the air, is it any wonder there are little green monsters popping up all around?[1] 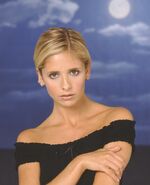