Buffy, Anya and Xander race to the Sunnydale police station to try to save Jonathan and Andrew from a sorceress; Dawn persuades Clem to take her to Rack; Spike's stamina and courage are put to the test by a mysterious demon.[1]

In the minutes after Willow's flaying of Warren, Buffy, Xander and Anya run through the woods. As Xander fights the urge to be sick after what he saw, Buffy deduces by Willow's last words ("one down") mean that she's going after Jonathan and Andrew, who are still in jail. Confused, Xander asks why Willow would now try to kill Jonathan and Andrew since they had nothing to do with killing Tara, but Buffy says that Willow has an addictive personality and once she starts something, she won't stop. Anya then brings up the fact that Willow will take some time to get to the jail, even at her magic level. Using her new demon powers, Anya teleports herself to get there first so she can save the boys.

Buffy and Xander then talk about Willow with Buffy saying that now that Willow has killed someone, things change. Xander, however, tries to justify Willow's actions by again reminding Buffy that Warren was a cold-blooded serial killer of women just getting started, and that he finally got what he deserved. Despite this, Buffy still doesn't believe that Warren deserved to die for killing Tara, but she and Xander agree that Jonathan and Andrew definitely don't deserve to die since they never killed anybody. Seconds later, Buffy and Xander find Xander's car destroyed, courtesy of Willow, and Buffy runs ahead by herself, leaving a self-loathing Xander behind to complain.

At the jail, Andrew is still convinced Warren is coming to save them, but Jonathan has a bit of a more realistic view and the two argue. Anya appears in the cell and updates the guys on the events that have happened since they were put in jail. Anya calls to the guard and tries to convince him that he needs to let the guys out because something terrible is coming for them.

Willow arrives outside the police station, puts an officer down with a sleep spell, and uses magic to tear apart the brick wall that keeps her from Andrew and Jonathan's cell. Officers try to stop Willow, but she keeps them all at bay. Anya, who can only teleport herself, is pretty much helpless and can't get the guys out of the cell as the wall breaks apart. Meanwhile, Buffy arrives on the scene and sneaks into the building. Willow floats up to the opening in the wall, but finds that the cell is empty and the bars have been bent apart, courtesy of Buffy. Anya tries to talk to Willow, but Willow knocks her out with a bolt of energy, and lets out a powerful and seemingly endless primeval scream.

Xander steals a police car and gives Buffy, Andrew and Jonathan an escape. Buffy and Xander talk about their plans and question why Willow isn't after them already. They don't have to wait long as a huge semi-truck approaches from behind with Willow on top, controlling the vehicle. Eventually though, Willow runs out of power and the driver stops the truck while Xander and the others escape. Meanwhile, Clem tries to entertain Dawn, but she is focused more on the fact that she is cooped up in the crypt with him and wants to be helping her sister and friends.

In the cave in Africa, Spike reviews the rules of the trial with the demon, and a large man with flaming fists approaches and starts to attack Spike.

Back in Sunnydale, Dawn has Clem lead the way to Rack's moving place, despite his strong misgivings, where Dawn hopes to find Willow. Meanwhile, Anya helps the others into the magic shop and goes to one of the few books Willow didn't drain, an untranslated book of protection spells. Jonathan tries to help, but Buffy isn't interested and he only manages to let them know that Willow will need a recharge soon; Buffy agrees, and makes sure that Jonathan knows that they are only protecting them for Willow's sake. Buffy and Xander talk about keeping Willow from killing Andrew or Jonathan and what is going to happen when they do actually find her.

Willow pays Rack a visit, and the two chat. "Tell me, Strawberry," he whispers, "what on this earth do you want?" Willow quotes Rack back to himself: "Just to take a little tour." She sucks the power, as well as the life, out of the pusher. Minutes later, Clem finally gets Dawn to Rack's place and Dawn goes in to talk with him, but finds Rack dead and a much more powerful Willow waiting for her.

Dawn is frightened by the new Willow, looking paler with black veins running across her face. Dawn asks Willow if she killed Rack, and Willow replies that the killing was a nice clean improvement over Warren. Dawn starts to run, but Willow won't let her leave. Dawn desperately attempts to reason with Willow, but Willow, unmoved and slightly annoyed, simply threatens to turn her back into a ball of energy and end her human existence in order to put an end to her constant whining. Fortunately, Buffy shows up just in time.

At the Magic Box, Jonathan continues to offer help to Xander and Anya as they struggle to translate the book, but Xander suggests he get back to sitting down unless he can do the translating for them. Andrew wonders why Jonathan is helping their supposed enemies and suggests a plan to escape before Willow can get to them. Nearby, Anya and Xander bicker about both the handling of the situation with Willow and the sour turns their relationship took. Xander expresses his guilt about the current situation because he saw Warren's gun before Warren shot Buffy and Tara, but he froze and was unable to do anything. Xander believes that he really is a useless coward, and that he always will be. Anya, who has no intention of helping Xander feel better, says nothing.

At Rack's shop, Buffy tries to reason with Willow and get Dawn out safely, but Willow tells Buffy that she got tired of being the old Willow because the only good part of that involved Tara. When Buffy brings up trying to think about positive things, Willow simply criticizes Buffy's hypocrisy, citing all of Buffy's self-destructive habits and depression since she was revived. As she talks, Willow transports the three of them into the Magic Box where Buffy and Dawn collapse to the floor, weakened by the teleportation, and Willow turns her magic on Andrew and Jonathan, hurling bolts of lethal magic at them. However, a protection barrier stops Willow from hurting Jonathan and Andrew because Anya, hiding around a corner, continuously chants a Sumerian protection spell from the book, some of which she had managed to translate.

Meanwhile in Africa, a burned and bloodied Spike finally manages to defeat his challenger by breaking the man's neck. But Spike quickly finds out that that this was only the first of many tests he must pass.

At the Magic Box, Buffy recovers and tries to talk with Willow and stop her from hurting Andrew or Jonathan. But Willow is relentless and, since she is unable to cast a spell on Andrew and Jonathan, instead casts a spell on herself to make herself supernaturally strong intending to beat them both to death. Buffy steps up to physically stop Willow, but she's carelessly tossed aside. Buffy recovers quickly and returns the favor by punching Willow. Xander, uncertain if Buffy can stop Willow, immediately takes the opportunity to get Dawn, Andrew, and Jonathan out of the shop, although Anya needs to be remain behind to chant the protection spell. Willow attempts to follow but Buffy stands in her way and refuses to let her leave. The then begin a huge fight, wrecking the Magic Box in the process, but neither one manage to gain an advantage over the other.

Xander leads the others through Sunnydale trying to find somewhere to hide until Willow can be stopped. Andrew decides that he doesn't want to stay in Sunnydale but wants to escape to Mexico. When Xander obviously objects. Andrew rebels and pulls a sword on Xander, but Jonathan pulls a sword on Andrew himself and forces him to back off, declaring that they are staying in Sunnydale and going back to jail to do their time when the dust settles.

Buffy and Willow's fight continues until Willow finds Anya hiding and, realizing what she was doing, promptly knocks her unconscious before tossing Buffy aside. Standing over her two bruised and unconscious former friends, Willow boasts in a confident tone that no one can stop her now. Suddenly, a bright green light sends Willow flying across the shop as Giles appears in the doorway, willing to test her unstoppable power.

Clem: "We don't have a plan. Don't we at least need a plan?"
Dawn: "Buffy and her friends never have a plan. They just sort of... jump in and don't know what they're doing."
Clem: "And this works?"
Dawn: "They never really let me come along. Guess we'll find out... It's okay. I mean they usually come back in one piece." 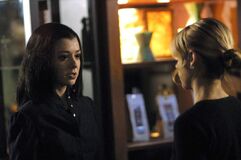 Retrieved from "https://buffy.fandom.com/wiki/Two_to_Go?oldid=236678"
Community content is available under CC-BY-SA unless otherwise noted.