"Triangle" is the eleventh episode of the fifth season of Buffy the Vampire Slayer television show, and the 89th episode in the series. Written by Jane Espenson and directed by Christopher Hibler, it originally broadcast on January 9, 2001 on The WB network.

XANDER IN THE MIDDLE — While Buffy recovers from losing Riley, emotions are charged between Willow and Anya when they are left in charge of the magic shop and Willow accidentally conjures an enormous troll that will force them to deal with their less than perfect friendship and their feelings towards Xander.[1]

Xander and Anya lie in bed together and they talk about Buffy's luck, or lack thereof, with men. They wonder if Buffy might be the problem. At a convent, Buffy protects a young nun from a vampire, then asks her questions about the life of a nun.

Buffy trains while talking to Giles about Riley, and then asks about his plans to ask the Watchers Council for help with Glory, since they can't find any information on her with their own resources. He assures Buffy that, although he has to tell the Council that Glory is looking for the Key, he has no intention of mentioning Dawn. While Giles prepares for a trip to England he leaves the shop in the hands of Anya, however as her people skills are lacking Willow offers to help out too. The two then begin squabbling, causing Giles to consider getting an earlier flight back and placing Xander and Tara in uncomfortable positions.

Dawn enters Buffy's room and notices that she has removed all her pictures of Riley. They talk about how Buffy is recuperating after his departure. Dawn tries to be as supportive of her sister as possible, and Buffy appreciates her efforts and discusses her emotions openly with her. Dawn expresses sadness that Riley left so suddenly, and Buffy admits that everyone except herself had seen it come on gradually. Dawn seems surprised, and Buffy mentions her hope that Riley might return one day for another try so that Buffy would be able to say all the things she hadn't been able to say before.

Box of chocolates in hand, Spike rehearses a conversation he plans to have with Buffy on a mannequin. He wants to explain his motivations for showing her Riley's late-night vampire activities, but his temper gets in the way. He begins to argue with the mannequin and ends by beating the mannequin with the box of chocolates and yelling, only to set it back up and start over.

Back at the Magic Box, Anya protests Willow's use of the shop products for magic spells, calling it stealing. Willow tries to tempt Anya by offering to show her some magic tricks, but Anya decides that Willow is using peer pressure and refuses to participate. Willow and Anya's argument escalates, and since Xander and Tara don't want to be in the middle of the arguments, they both leave.

Willow starts her simulated sunlight spell, but Anya interrupts with questions and the two begin arguing again. Accidentally, the spell calls forth a giant troll. The store and much of Sunnydale is seriously damaged as the troll puts his hammer and great strength to good use.

At campus, Buffy and Tara talk about their new semester classes and then about the events at the magic shop. Buffy overreacts when Tara mentions possible trouble between Anya and Xander because of Willow and Anya's constant fighting. Buffy cries and buries her head in Tara's shoulder, declaring that Anya and Xander have a "miraculous love."

Anya drives a car for the first time wildly through the streets while Willow, in the passenger seat, searches for a spell to stop the troll, who proceeds to wreak havoc in Sunnydale, bashing trash cans, smashing his hammer into things, and declaring to the people running in the opposite direction: "You do well to flee, townspeople. I will pillage your lands and dwellings. I will burn your crops, and make merry sport with your more attractive daughters, mark my words" before catching the scent of "ale" and heading toward the source.

Xander mopes at the Bronze and runs into Spike. As Xander seethes hostility at his presence, Spike fishes for information on Buffy, to no avail. The two eventually begin to play pool and talk about women trouble. Back at the Magic Box, Buffy and Tara fear the worst as they view the destruction left by the troll, and take off to try to track it. The troll arrives at the Bronze, declaring his desire to drink ale and eat babies. Xander suggests that Spike fights the troll, but Spike is "paralyzed by not caring very much." The troll asks Spike and Xander where to find babies to eat. Spike suggests the troll try the hospital, and Xander ineffectually attempts to talk sense into the troll, suggesting that he sit down in one of sturdier chairs to have a calm talk. However, the troll is unsatisfied with their suggestions of stags, strong grog, and onion blossoms. While the troll drinks beer straight from a keg, the rest of the gang gathers at the Bronze. When Buffy arrives, Spike cautiously greets her, but she ignores him and he steps back, his face filled with disappointment.

The troll, Olaf, reveals that he used to date Anya and (after his dalliance with "one wench") she turned him into a troll, which earned her the job of a vengeance demon. Buffy attacks Olaf and Spike jumps in a moment later to back her up (triumphantly copping a feel in the process). Buffy and Spike are unsuccessful, and Olaf uses his hammer to knock down the second floor of the Bronze and injure many innocent people. As Buffy takes stock of the damage, she notices Spike comforting a bleeding victim. In an accusatory manner, Buffy asks Spike what he is doing. He declares that he is only helping, and that would not dream of sampling any blood because he knows she wouldn't like it, but she refuses to give him credit for his intentions, declaring him to be disgusting. Buffy sends Willow and Anya back to the magic shop to find a spell that will actually be effective against Olaf.

At the shop, Willow and Anya finally address the root of their issues: Their fear of each other's potential to hurt Xander and pull him away from the other. Anya makes it clear that she has no intention of hurting Xander in any way, and Willow assures Anya that she has no intention of poisoning his mind against Anya, or luring him away with her "lips." Willow rebuffs with "Hello, gay now!" Olaf storms into the shop and intends to hurt the girls, but Xander arrives before the two most important women in his life are seriously wounded. The troll beats Xander up badly, then tells Xander to choose whether Anya or Willow will die. Xander refuses to choose, proving his loyalty to both girls, but when Olaf decides to kill Xander, Anya offers herself. Buffy arrives and fights with the troll while Willow works on a spell and Anya distracts Olaf with insults. When Olaf says that Anya and Xander won't last, Buffy gets incredibly angry and beats the troll into unconsciousness. The troll is sent off into an alternate universe (which is probably the Land of the Trolls, but possibly the world without shrimp).

After he finally returns, Giles talks to Buffy about the damage to the shop. Joyce joins them and they discuss the fact that the Council had no records on Glory; however, Giles mentions there's a chance they may be able to find something based on the information Giles gave. They then discuss the Key, however, Dawn is eavesdropping and is left very concerned when she hears her name mentioned.

Willow: "Um...Giles? Could you maybe make an angry face? 'Cause the smile is kind of scaring me." 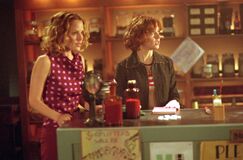 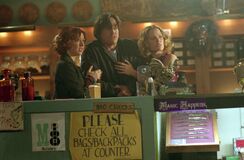 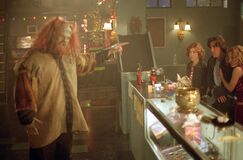 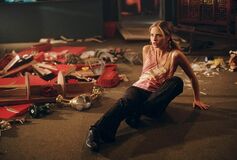 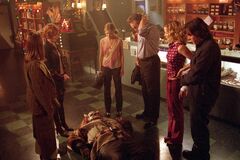 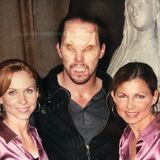 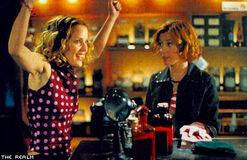 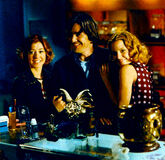