"This Year's Girl" is the fifteenth episode of the fourth season of Buffy the Vampire Slayer and the seventy-first episode in the series. Written by Douglas Petrie and directed by Michael Gershman, it originally broadcast on February 22, 2000 on The WB network.

ELIZA DUSHKU RETURNS AS FAITH IN A TWO-PART EPISODE — Buffy is preoccupied with catching the creature that attacked Riley, but her problems are just beginning when she learns that Faith has awakened from her coma and has gone seeking revenge to the only home in which Faith remembers Buffy living. Meanwhile, once she is set free, Faith receives a mysterious gift left behind from the Mayor.[1]

In a dream, Buffy and Faith put clean sheets on a bed. Buffy says she wishes she could stay, then Faith replies: "I know, there's so much to do before little sis gets here." Suddenly, Faith's blood begins to drip onto the white sheets. Buffy is revealed to be twisting Faith's knife into her stomach. Faith asks: "Are you ever gonna take this thing out?"

Xander is checking out the broken taser blaster from the Initiative in his basement, while the Scoobies look on. Buffy asks him if he can repair it or not. Xander replies: "sure, as soon as I get my master's degree in advanced starship technology." Willow offers suggestions to help, to no avail. Giles is concerned about Buffy because she's been patrolling non-stop for days without finding Adam. Buffy is worried about Riley because she still hasn't seen him since he was injured. Xander accidentally shocks himself with the blaster, but no one notices. Riley wakes up and tries to leave the military hospital, but Forrest and Graham try to talk him out of it. Riley does not change his mind.

At the hospital, Faith, while in her coma, dreams of a picnic with Mayor Wilkins. Buffy arrives, slits his throat, and stabs him in the belly with Faith's knife, then threatens Faith herself. Faith crawls away.

On patrol, Buffy, Willow, and Xander find a demon strung up on a tree opened up like a dissection experiment. Back at Xander's, Buffy explains her plan for getting Riley out, which involves fighting her way into the Initiative. Riley appears, explaining that he has simply walked away from the Initiative.

Back at the hospital, Faith continues to dream. In the dream, Faith is running through a cemetery while Buffy pursues her. Faith falls into an open grave. Buffy jumps into the grave. A moment later Faith alone climbs out of the grave in her dream. Then Faith awakens from her coma. Pulling free of the tubes in her body, Faith walks out into the hospital halls and encounters a girl. She thinks it's still the day of graduation, but the girl informs her that the school was destroyed and that the Mayor died at the graduation ceremony. After the girl tells Faith the current date, Faith leaves the hospital in the girl's clothes.

Riley and Buffy talk about their jobs working to fight the forces of evil. Buffy tells him he has a choice in what he does with his life. At the hospital, a detective named Clark talks with members of the staff. They find a girl, beaten up and stripped, but no Faith. A nurse makes a call, asking for a team to be sent out.

Faith walks around Sunnydale looking at all the things that have changed, visiting the burnt-out shell of Sunnydale High School and ending up outside Giles' house and eavesdropping on the Scooby Gang's plans to attack Adam. A phone call informs Buffy that Faith is awake and on the loose. They talk about how they're going to deal with her, but conclude that they'll have to see what condition she is in first. At this point, Riley asks who Faith is.

On campus, Buffy admits to Willow that she gave Riley an edited version of her history with Faith; mostly leaving out the parts involving Angel. They then talk about how to find Faith only to find her waiting for them. The two Slayers talk about everything that has happened and Buffy tries to persuade Faith to give herself up, but Faith refuses and instead promises revenge. The cops then arrive and the two fight briefly before Faith runs.

Willow brings Tara along with her to search for Faith. Xander and Giles go searching the streets for Faith and Adam, but instead they encounter Spike. He's not willing to help them, preferring the idea of helping Faith find and kill them all. A helicopter lands, three men carrying briefcases exit and after conversing with the nurse, they go into the hospital.

Faith is approached by a demon that tries to give her a gift, but she kills him and runs off with the box. She breaks into a store to watch a videotape of the Mayor on one of the VCRs. Having recorded it just after she fell into her coma, he tells her that if she is watching it then he must be dead and his plan to destroy Sunnydale failed. He then regretfully tells her that the world no longer has a place for her and its only a matter of time before she dies, but then tells her that the enclosed box contains a special gift that will allow her to go out with a bang: a Draconian Katra.

Faith then goes to Buffy's house and punches out Joyce Summers. Keeping Joyce her captive, Faith notes from the piled up mail that it's been quite a while since Buffy visited home and starts to go off the deep end as she picks up a knife and angrily states that Buffy knew she was on the loose and didn't even think to check on her own mother... only for her to fly through the window as if on cue. The Slayers have a fight that travels through almost every room of the house while Joyce calls the police.

Giles finds the lights don't work at his apartment, but a lamp turns on and the three men with briefcases are there. One of them, Collins, says "Hello Rupert," causing Giles to realize that they are from the Watchers Council.

As the fight between Buffy and Faith gets more intense, the police arrive. Faith puts the gift from the Mayor on her hand and grabs Buffy's hand. Light flows through them and after a few seconds of the two looking at each other in confusion, Buffy punches Faith and knocks her out, leaving her to be arrested. Buffy then smashes the metal contraption from the Mayor and when Joyce asks Buffy if she's okay, she responds: "Five by five." 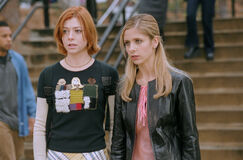 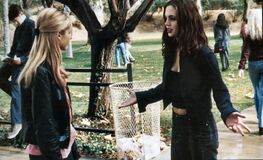 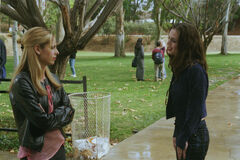 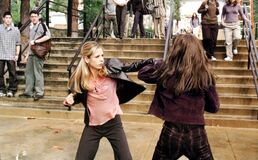 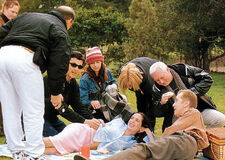 "The last time they fought, Buffy left her for dead. Big mistake."