"The Zeppo" is the thirteenth episode of the third season of Buffy the Vampire Slayer television show, and is the forty-seventh episode in the series. Written by Dan Vebber and directed by James Whitmore Jr., it originally broadcast on January 26, 1999 on The WB network.

ODD MAN OUT — Xander's lack of slaying superpowers has him feeling painfully expendable, but his quest to prove he's cool leads him to an unforgettable night that finds him consorting with fast women, raising the dead and rolling with a dangerous crowd that could put Sunnydale in a world of hurt. Meanwhile, Buffy, Giles and the rest of the crew engage in a furious battle with an all-female apocalypse cult that intends to reopen the Hellmouth and bring about the end of the world.[1]

While the Scooby Gang slaughters demons in an underground nest, all Xander manages to do is get himself hurt. Buffy suggests he stay out of the fighting from then on. Giles makes a point to tell him to hang back from the fighting from now on. Xander becomes desperate to find his place after his breakup with Cordelia and the alienation from his friends.

The next day at Sunnydale High, when another student throws him a football, Xander misses and it hits Jack O'Toole's lunch, resulting in Jack threatening to beat him up. Cordelia, having witnessed the entire event, relishes in telling Xander he is useless and the only member of the Scooby Gang who brings nothing special to the group, referring to him as the "Zeppo." Meanwhile, Giles informs Buffy that the end of the world is near: an order of demons called the Sisterhood of Jhe is planning to reopen the Hellmouth.

After a discussion with Oz about what makes someone cool, Xander shows up at school driving a 1957 Chevrolet Bel Air convertible, borrowed from his uncle Rory. Meeting Buffy and Willow, he says he is now the "car guy" and looks forward to his new role within the group. He soon finds that instead, he's tasked with nothing more than getting donuts for the rest of the Scooby Gang, who are doing research at the school library. While at the Espresso Pump, Xander encounters Cordelia who rubs in the fact that all he does now is simple errands. Just then, Lysette starts to flirt with Xander for his car and wants to go for a ride. Xander, eager to try one-upping Cordelia, agrees once he's dropped the donuts off.

At the library, Buffy, Willow and Giles are researching. Meanwhile, Oz, in full werewolf form, is freaking out in his cage. Willow thinks it's because he can sense trouble. With the Watchers Council refusing to speak to him, Giles leaves to try to contact "the Spirit Guides who exist out of time," who he hopes will provide information on the Sisterhood of Jhe.

At the Bronze that night, Xander is still entertaining Lysette, though she's far more interested in the car than she is in him. Xander meets Angel, who is looking for Buffy to discuss the Sisterhood of Jhe. Angel dismisses Xander's offer to help, telling him it would be safer for Xander to keep out of the way. As he leaves, Lysette still in tow, Xander drives into a parked car. Jack gets out of the car and threatens Xander with Katie, his knife. Before Jack can do anything Xander, a cop arrives and interrupts. Xander lies to the cop, telling him that the two were just "rasslin'." Surprised yet grateful, Jack offers to let Xander be his "wheel man" and drive him, and later Jack's friends, wherever they need to go. Xander says it sounds great then asks about Jack's car he tells Xander that it isn't his car. Xander asks where they're going as Jack, Lysette and Xander get in the car.

Xander and Lysette are standing by a gravestone Restfield Cemetery while Jack casts a spell to raise his friends from the dead. Big Bob breaks out from the ground, ecstatic to be back. Lysette, at first shocked by the situation, realizes that Big Bob is dead, screams and runs away. Xander cries out that he'll call her while Jack and Bob talk. Bob asks how long he'd been down and Jack tells him it's been eight months. Jack raises one more friend, Dickie, at that cemetery before Xander spots Giles, who unsuccessfully tried to get help from the Spirit Guides. Desperate to leave Jack and his undead friends behind, he begs to help Giles, but to no avail; Giles tells Xander that he is "better out of the way." Jack raises his last dead friend Parker before they leave.

Buffy visits Willy only to find that the Sisterhood of Jhe has already visited Willy's Bar and thoroughly wrecked it. Willy, who's been beaten up, reveals that the Sisterhood is planning to open the Hellmouth that night. He advises Buffy to find Angel and consider how to spend her last night on Earth. In the library, werewolf Oz is going crazy, and Giles and Willow are forced to move him to a safer location.

Jack and his friends drive around town with Xander, who worries even more as they discuss their mischievous plans. Eventually, they decide to "bake a cake," which involves gathering supplies by robbing the Decker Hardware store. While Xander waits for them to get their supplies, he spots Willow leaving Uncle Bob's Magic Cabinet shop. He tries to talk to her, but her mind is elsewhere as she prepares for the upcoming apocalypse. Before she leaves, though, she tells him she loves him. Xander decides it's enough and tries to run off, though Jack and his friends decide to "initiate" him into their group by killing him. Xander points out that Jack isn't dead, only for Jack to lift his shirt and reveal several bullet holes in his chest. It turns out that Jack's grandfather "raised" him minutes after Jack was killed in a drive-by shooting. Xander runs and distracts them before jumping in his car and taking off. Jack and his friends lament about the fact that, not only do they no longer have "wheels", but Xander also took off with their supplies as well.

Xander is driving when he comes across Faith, who is fighting off a demon of the Sisterhood. After he rescues her, the two head to her motel room. The rush of the battle has Faith riled up, so she seduces Xander and they have sex. After it, she kicks him out, clothes in hand, telling him it was great but she's gotta shower. Back in the car, he discovers gunpowder, kerosene, and wire, and realizes that Jack and his friends' "cake" is actually a bomb.

Xander drives back to the hardware store to find Jack and his gang long gone, laden with supplies. He heads to Angel's mansion to find Buffy, where the couple is arguing about their feelings and sacrifice. Realizing it's a bad moment, Xander leaves. His next move is to head for the library to find Giles, but instead, he finds the zombies. As Xander drives by he grabs Parker, holding him and demanding to know where the bomb is located. Parker reveals it's in Sunnydale High's boiler room. Xander tells him he has one more question and that he better answer it honestly or he'll be sorry. He starts to ask Parker how to defuse the bomb but Parker's head suddenly collides with a mailbox, leaving Xander holding onto his corpse body. Xander screams and lets the body go saying he probably should have left out that last part of his speech before speeding up to get to the school. Jack and his remaining gang pursue after Xander's car.

In the library, the Hellmouth has been opened and its multi-tentacled spawn has emerged. Buffy, Faith, Willow, Giles, and Angel prepare to fight it, as Xander and the zombies run past in the corridor. During the chase, Xander manages to crush Big Bob with a soda machine, and Dickie is ripped apart by the Sisterhood.

Xander heads down to the boiler room after the bomb, where he finds Jack. After a brief fight, Xander asks Jack who is more afraid of death. Jack points out that he's already dead, but Xander notes that "walking around drinking beer with your buddies" dead is a lot different from "being blown up and swept up by a janitor" dead. When Jack confronts Xander about the possibility of death, he responds: "I like the quiet." With seconds to spare, Jack finally defuses the bomb. Xander tells Jack he doesn't want to see him around school anymore, and leaves. Jack promises revenge against Xander the instant his back is turned and opens a different door to leave, from where werewolf Oz jumps and attacks him.

The next day, the Scoobies are sitting on a bench and discussing the previous night's battle. They're all bruised and cut up, Buffy is wearing a sling on her arm and Giles has a cast on his left wrist. They mention that Angel was knocked out during the fight and Buffy feared he was dead. When Xander stops by, Willow comments that he should be glad he wasn't at school last night. He offers the group a snack, and Oz, feeling "strangely full," declines. As Xander walks away, he runs into Cordelia, who taunts him again. He smiles and continues past his now-confused ex-girlfriend.

Jack: "That's it. No way am I bringing him back after I kill him." 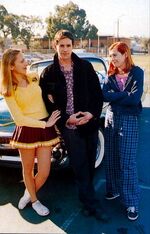 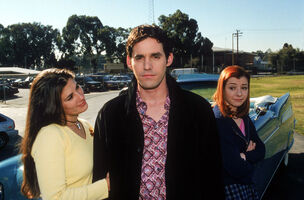 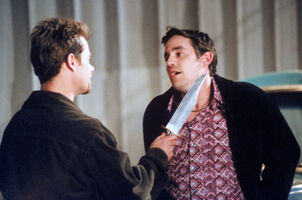 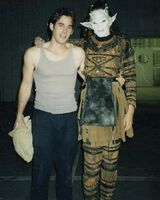 Retrieved from "https://buffy.fandom.com/wiki/The_Zeppo?oldid=231306"
Community content is available under CC-BY-SA unless otherwise noted.