The Willow Files, Volume 1 is a novelization anthology of the Buffy the Vampire Slayer novels series. Written by Yvonne Navarro, it was originally published on December 1, 1999 by Pocket Books.

When Buffy the Vampire Slayer arrived in Sunnydale, she befriended a bookish, insecure girl named Willow. As a Slayerette, Will uses her computer prowess for good, hacking into electronic government files and researching obscure rituals on the Web. But Willow's love life is severely lacking, consisting of an unfulfilled crush on her friend Xander and a short-lived fling with a deadly demon she met over the Internet.

Through her often life-threatening experiences with the Slayer, Willow gains the confidence to just be herself in the peer pressure-filled world of high school. And when her first real boyfriend, Oz, turns out to be a bit… unusual… in his own right, Willow is just the girl to prove that love really is blind… and a little scary.[1]

The Willow Files, Volume 1 is a novelization of three Buffy the Vampire Slayer episodes: 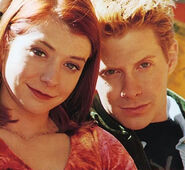