The 1st official companion to the hit show!

As long as there have been vampires, there has been the Slayer. One girl in all the world, to find them where they gather and to stop the spread of their evil and the swell of their members. She is the Slayer.

The Monsters, The Mythology, The Villains, The Victims, The Fashion

Don't be caught dead without The Watcher's Guide, Volume 1 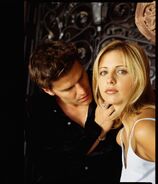 Cover in Germany
Add a photo to this gallery
Retrieved from "https://buffy.fandom.com/wiki/The_Watcher%27s_Guide,_Volume_1?oldid=218548"
Community content is available under CC-BY-SA unless otherwise noted.