The Swell, also known as "Vampy Cats", were a species of demons with the appearance of stuffed vampiric cats, advertised as a doll called the "Vampy Cat Play Friend". Their appearance was the result of the recent upsurge in vampire popularity in the media. They were part of Twilight's Cabal and prone to spouting misogynistic speech. "Fluffy" was one of them.

Vampy Cats had the ability to take possession of human hosts by invading their bodies through oral entry and then taking control of their bodies. Possession could be undone by forcing the host to vomit the demon; for example, by kicking the host hard in the stomach. However, long-term possession caused the host body to desiccate into a corpse-like state.

Vampy Cats also had the ability to merge into a gigantic gestalt form, which they referred to as "The Swell".

The Slayers Satsu and Kennedy found a truckload of them under attack from a demon in Tokyo, which was a ruse on Twilight's part to get a Vampy Cat into the Tokyo Slayer headquarters and discover the location of their home base in Scotland. The Slayers used a submarine to destroy The Swell before it could be shipped off.

Harmony Kendall later went on the air and cited this as an example of unprovoked Slayer aggression towards anything vampiric. 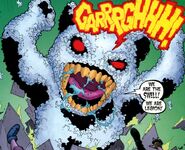 Retrieved from "https://buffy.fandom.com/wiki/The_Swell?oldid=160742"
Community content is available under CC-BY-SA unless otherwise noted.