"The Replacement" is the third episode of the fifth season of Buffy the Vampire Slayer television show, and the eighty-first episode in the series. Written by Jane Espenson and directed by James A. Contner, it was originally broadcast on October 10, 2000 on The WB network.

NICHOLAS BRENDON'S IDENTICAL TWIN BROTHER GUEST-STARS — When a crafty demon out Buffy hunting accidentally catches Xander in his sights, a mysterious Xander double is born. Two Xanders aren't better than one as the evil double quickly takes over Xander's identity, fooling everyone including Buffy, and starts living Xander's life with a flourish.[1]

Xander and Anya watch a movie with Buffy and Riley while listening to the background noise of Xander's drunken parents fighting and yelling upstairs. The next day, the gang looks at a potential new apartment for Xander. He doesn't think he can afford it and this upsets Anya. Giles receives a visit from a demon searching for the Slayer. He later identifies the demon as Toth, the only survivor of the Tothric Clan.

The Scoobies check out the city dump in search of the demon and find Spike collecting. The demon hits Xander with light from a rod and knocks him to the ground. He gets to his feet and walks off with the rest of the gang, but there is another Xander still lying in a pile of trash. The next morning, one Xander awakens at the city dump and then discovers his double upon returning to his house. Meanwhile, Spike has put together a Buffy doll from mannequin parts which he uses to practice beating up on.

One of the Xanders is very confident and observant and gets a promotion at work, signs a lease for the apartment, and sets up a date with Anya. The other, hasty and emotional Xander watches as all this happens and finally confronts his double. After the two Xanders see each other, the confident Xander talks to Buffy and she makes this a matter of Slayer business.

Soaked by the rain, the "hasty" Xander goes to Willow and tries to explain that this double is taking over his life. He tells Willow that the double is doing a better job of living his life but then suddenly realizes that his double is going after Anya and that is one thing he won't allow.

Anya and the "confident" Xander discuss their future and Anya expresses her fears about not living forever. Giles discovers that the rod Toth used split Xander into two real Xanders, one with weak qualities and the other with strong qualities. Toth's actual plan had been to split Buffy into her human and Slayer forms, then killing the human Buffy as neither side can survive without the other. The hasty Xander crashes the date between confident Xander and Anya. Both think that the other is a demon and the hasty Xander pulls out a handgun he got from Anya's apartment.

Buffy tells the doubles the truth about their situation and tries to convince them not to kill each other. Toth appears at the apartment, only Buffy and Riley fight and kill him. The Xander halves eventually begin to get along, and their actions become so similar to each other that the comment is made that Xander is a "bad influence" on himself. Giles and Willow research and come up with a way to reunite the Xander halves, but Anya expresses disappointment over this as she wants both to stick around for some sexual shenanigans, much to the disturbance of the others. Willow ends the spell and makes Xander one again. While moving Xander into his new apartment, Xander and Riley talk. Riley confesses that despite how much he loves Buffy, he realizes that she doesn't feel the same. 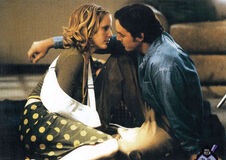 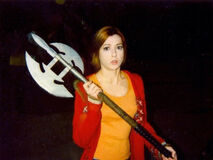