"The Puppet Show" is the ninth episode of the first season of Buffy the Vampire Slayer television show, and the ninth episode in the series. It was written by Rob Des Hotel and Dean Batali, and directed by Ellen S. Pressman. It was originally broadcast on May 5, 1997.

Buffy Summers suspects a ventriloquist's dummy may be harvesting organs from classmates who are participating in the school talent show.

A demon watches a ballet dancer, Emily. Cordelia is singing Whitney Houston's song Greatest Love of All off key, as part of the try outs for the talent show. Giles stops her, obviously to stop his ears from hurting. Buffy, Xander, and Willow join Giles, and mock him as he complains that Snyder, the school's new Principal (whom he refers to as "the Führer") made him in charge of the talent show, despite his wishes, so he could have more contact with the students. As Snyder overhears the Scoobies making fun of Giles, he punishes them by forcing them to participate in the talent show making it clear that he's far different from Mr. Flutie in that he's not interested in making friends with his students but making them suffer. The next try-out is Morgan and his dummy, Sid, and Buffy confesses to being freaked out by dummies. Morgan's act takes a sudden turn for the better when Sid suddenly develops a personality and starts making sarcastic comments about the act. Emily notices the demon and screams.

The talent show rehearsals continue with Marc, an unsuccessful magician. Buffy, Willow, and Xander debate what to do for the talent show, and settle on a dramatic scene, since it does not require any actual talent. Sid watches and makes rude comments as Morgan explains the voice is an imitation of his father. Snyder explains to Giles that he will run a safer, more disciplined school, only to be interrupted by the discovery of Emily's body, whose heart has been cut out with a knife. The Scoobies debate whether the killer is a demon or a human, eliciting Willow's comment that a human murderer is scarier since it could be anyone; even her.

The Scoobies split up and begin interviewing people from the talent show to find the killer. All of their interviews point in the direction of Morgan and his dummy, Sid. They decide to check Morgan's locker after school hours. As Buffy is busy breaking into Morgan's locker and finds nothing, Snyder finds her almost red-handed and admonishes her for being in the school after hours. Morgan and Sid turn out to be hiding, watching Buffy. Sid tells Morgan that Buffy is "the one," saying that her strength is evidence of it.

As Buffy goes to sleep, Sid waits until the lights are off and sneaks into her room. When she wakes up, he quickly scampers out. Naturally, Buffy has a hard time convincing the Scoobies that Sid broke into her room. Giles, on his part, suggests that the demon responsible might be needing the heart (and later, a brain) to keep a human guise, which means the demon could be anyone, once again. When a teacher confiscates Sid, Xander steals him so that Buffy can talk to Morgan alone. As Buffy searches for Morgan backstage, Snyder is again displeased with her being where he does not think she belongs. In the library, just as Willow finds references to another possible explanation – animated dummies might harvest organs to become humans – Sid is gone when Xander stops paying any attention to him. Buffy finds Morgan's body, missing a brain, just as a chandelier falls on her. When she wakes up, Sid attacks her, and during their fight, they realize they are both working for the same goal: to stop the demon.

Sid explains he is a demon hunter, cursed to dummy form until he kills the last of the Brotherhood of Seven, those demons which harvest a heart and a brain. He's killed six and there's only one left. However, as his body is long gone, Sid will die when the curse breaks, something he accepts. Realizing the demon has what it needs, they theorize it will be moving on, and so it will be whoever is missing from the show. Sid suggests to Giles to form a "power circle" to find out who is missing, but Giles sees everyone there. When Sid is again missing, Buffy finds Morgan's brain when she looks for him. Buffy, Willow, and Xander discover Morgan had brain cancer — which is probably the reason the demon did not use his brain and is now looking for someone smart. This means that Giles and Willow are in danger.

At the talent show, Marc the magician tricks Giles into strapping himself into a guillotine, ostensibly a magic prop, so that he can take his scalp off and get his brain as he is actually the demon. Just in time, Buffy and the others realize what is happening and rush to his rescue. As Buffy and Sid battle Marc who takes on his demon form, Xander keeps Giles from getting his scalp cut off while Willow frees him with an axe. Finally, Buffy and Xander manage to decapitate Marc with the guillotine, defeating him. Sid reveals that to kill Marc he has to be stabbed in the heart and gently rejects Buffy's offer to do it and kills Marc himself. With Marc dead, Sid's curse finally breaks and he dies just as the curtain opens. Everyone assumes it is part of the show though there is only minimal clapping.

Buffy, Xander, and Willow then performed a scene from Oedipus Rex with a remarkable lack of talent, and with Willow running away from the stage.

Buffy - "And I don't think we'll be featuring Xander's special gift..."
Xander - "Okay, some people are jealous that they can't burp the alphabet."
Buffy - "...so we're back to drama. We'll just do it quickly. Get in, get out. Nobody gets hurt."

Buffy - "Pretty good. I never heard 'Flight of the Bumblebee' on the tuba before."
Lisa - "Most people aren't up to it." 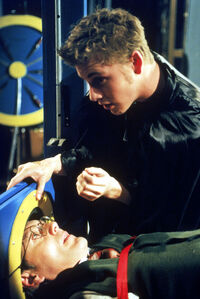 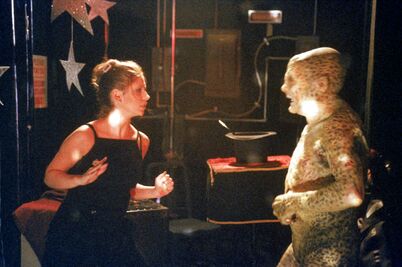 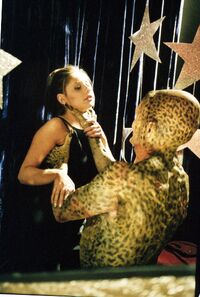 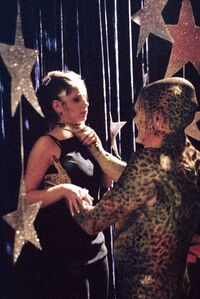 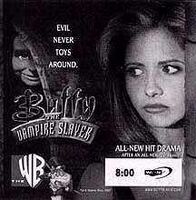 "Evil never toys around."
Add a photo to this gallery

Retrieved from "https://buffy.fandom.com/wiki/The_Puppet_Show?oldid=173249"
Community content is available under CC-BY-SA unless otherwise noted.