The Longest Night is a short story anthology book of Angel novel series. It was originally published on December 2, 2002 by Pocket Books.

FROM DUSK UNTIL DAWN

December — sure, 'tis the season and all that, but evil generally isn't up for a holiday. And December 21 — well, that's usually the winter solstice.

A.K.A. the longest night of the year.

It's easy enough to see why this night would practically be the undead's New Year's Eve, which means, visions or no, it's a crunch time for Angel Investigations.

Now, in the first-ever Angel short story collection, follow our gang hour by hour, evil by evil. From twilight to daylight, Angel, Cordelia, Wesley, Gunn and Fred have to keep the forces of darkness at bay — even when black magick has a head start... 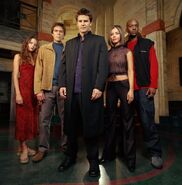 Cover in France (part 2)
Add a photo to this gallery

Retrieved from "https://buffy.fandom.com/wiki/The_Longest_Night?oldid=213138"
Community content is available under CC-BY-SA unless otherwise noted.