"The Long Way Home" is the first volume of Buffy the Vampire Slayer Season Eight trade paperbacks, collecting issues one to five of the comic book series.

Since the destruction of the Hellmouth, the Slayers — newly legion — have gotten organized and are kicking some serious undead butt. But not everything’s fun and firearms, as an old enemy reappears and Dawn experiences some serious growing pains. Meanwhile, one of the “Buffy” decoy slayers is going through major pain of her own.[1] 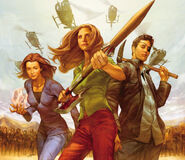 Cover in Turkey
Add a photo to this gallery

Retrieved from "https://buffy.fandom.com/wiki/The_Long_Way_Home?oldid=219566"
Community content is available under CC-BY-SA unless otherwise noted.