The Killer in Me

The Killer in Me

"The Killer in Me" is the thirteenth episode of the seventh season of Buffy the Vampire Slayer and the one 135th episode in the series. Written by Drew Z. Greenberg and directed by David Solomon, it was originally broadcast on February 4, 2003, on the UPN network.

A KISS IS STILL A KISS — Spike's chip is malfunctioning, prompting to Buffy to search for a way to fix it. Meanwhile, a kiss with Kennedy turns Willow into Warren, and Kennedy races to help Willow find a solution before she becomes Warren permanently. Giles takes the rest of the potentials on a quest in the desert, while Xander and the others get a call from England, which leads them to believe Giles may not be Giles.[1]

Giles prepares to take the Potential Slayers on a trip to the desert to meet the First Slayer. Kennedy, who's sick with the flu, stays home and after hearing about all the bickering and problems with the Potentials and their driving trip, Giles wishes he was staying home too. Buffy goes to check on Spike, who's chained up in the basement. They chat about the girls being gone and Spike's decision to stay chained up until they know the First Evil is through with him. While they talk about dealing with that problem, Spike's starts to writhe in pain as unexpectedly, the chip starts frying his brain.

Buffy talks with Willow in the kitchen about Spike's chip and what little they actually know about it. Willow goes upstairs and finds Kennedy is not sick and she's getting dressed for a "mission" which requires Willow's assistance. The mission turns out to be drinks at the Bronze and the sneakiness of it doesn't impress Willow much. Kennedy does manage to get Willow to stay long enough to finish her drink and she starts up conversation about Willow's sexuality. Eventually, Willow opens up and talks about being gay and her relationship with Tara. Back in the basement, Buffy checks on Spike again and after they talk about the potential causes of the chip's glitches, Buffy realizes she's going to have to contact the people who helped put the chip in his head in the first place. Buffy tries to reach Riley on the phone while Spike's chip continues to cause him terrible pain.

Willow and Kennedy finish their drinks as they continue to chat about why Kennedy is interested in Willow. Back at the house, Willow returns to her room and Kennedy follows. Kennedy moves in and kisses Willow, but the kiss has a surprising effect: it makes Willow take on the appearance of Warren. Willow panics and rushes downstairs and scares the rest of the gang with her appearance and potential First Evil quality. It takes some convincing, but once Buffy actually hits Warren and Willow reminds Xander of some other kindergarten stories she knows, they realize it's not The First. Willow goes off to handle her glamour problem, but she finds unwanted company in Kennedy tagging along.

After yet another attack of Spike's chip, Buffy and Spike return to the site of the Initiative in hopes of getting some of the drugs Spike was supposedly given to subdue him whenever his chip went crazy. They climb back inside the buried building through a trap door in the ground.

The Watcher Robson calls the Summers' residence and informs the gang about Giles's seemingly fatal encounter with the Bringers and an ax, mentioning that he blacked out just as the Bringer was about to swing and by the time he woke up Giles was gone. This gives the gang concern, since Giles never mentioned this to any of them start to question whether Giles survived that encounter or not, as if he died then the First may have taken his form to infiltrate Buffy's inner circle. Andrew mentions that the First is incorporeal so they'd know it was really Giles if any of them have touched him... but no-one can recall actually doing so. and worry when none of them can remember a time when Giles actually touched someone. Xander, Anya, Dawn, and Andrew quickly rush to the desert knowing that if Giles is really the First then he has successfully isolated all the potentials. They discover when they are able to touch him that it is really Giles leaving him annoyed with them.

Willow takes Kennedy to meet with the Wiccan group at UC Sunnydale. She's surprised to see that Amy is a part of the group and claims to have changed her magical ways. Amy attempts to help Willow rid herself of the glamor, but the spell Amy tries brings forth another surprise: A burst of Warren from inside of Willow. Willow tries to run away as she realizes she's not just looking like Warren, she's becoming him. Kennedy tries to follow, but Willow puts up a magical barrier to keep her from doing so.

Buffy and Spike wander through the remains of the Initiative facilities and pass by the many dead bodies of the human and demon sort that were sealed inside. Meanwhile, Willow runs outside in tears but Warren begins to take more control and he heads off on a mission. Inside the Initiative, Spike and Buffy hear noises and then are attacked by a demon. Buffy is knocked down by the demon while Spike's chip misfires again. The demon grabs Spike and drags him off into the darkness.

Kennedy returns to the school and finds Amy packing up supplies and the rest of the group gone. Amy comments on Kennedy's concern for Willow, but Kennedy gets suspicious when she realizes Amy knows she's a Potential and that fact was never mentioned to her.

Guided by Warren, Willow goes to the gun shop where he bought his last deadly weapon and Willow buys the same one. Giles is tackled to the ground by Xander and the others and they're all pleased to find that he has a solid form and is not the First Evil.

Buffy battles with and finally kills the demon inside the Initiative. As she crouches down by Spike, lights turn on and a flood of military men reveal themselves. The commanding officer explains that Buffy's attempted contact with Riley was successful and that they're there to help her and Spike. Buffy talks with the commanding officer and he reveals that Spike's chip is a danger to him now. She is given the choice to decide whether the chip is fixed or removed.

Kennedy confronts Amy about the fact that Amy is responsible for Willow's current "Warren" problem. Amy reveals that she put a Penance Malediction hex on Willow for fun because Willow was able to do so much evil and still get the love of her friends back. Kennedy is determined to save Willow and stop Amy, but Amy's not threatened. Armed with a gun, Willow charges into Buffy's backyard where Kennedy is waiting after being transported by Amy. Willow starts to relive the moment of Tara's death from Warren's perspective, but Kennedy talks her down. Through her sobs, Willow reveals that she turned into Warren not because he was the man she murdered, but because he was Tara's killer. She tells Kennedy that when she kissed her, she forgot just for a moment to grieve for Tara, and in forgetting, she let her truly die — in essence, killing her. She then says she's worried that she's going to lose the battle with Warren for her body. Kennedy convinces her otherwise and brings Willow back by kissing her.

Giles: "Right. Well, thank goodness I needn't worry myself with the idea of bad things happening in my absence. You getting shot, for example. Or throwing everybody in the basement and trying to kill them. Or Willow turning evil..."
Dawn: "Oooh, don't forget, Anya turned evil too."
Buffy: (Buffy turns, stares at Dawn. Not amused. And, back to Giles:) "Okay, just leave." 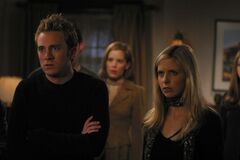 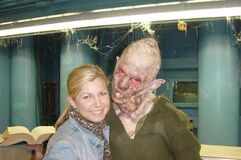 The Killer in Me promo