"The Initiative" is the seventh episode of the fourth season of Buffy the Vampire Slayer television show, and the sixty-third episode in the series. It was written by Douglas Petrie and directed by James A. Contner. It originally broadcast on November 16, 1999 on The WB network.

THE TRUTH IS DOWN THERE — Unbeknownst to Buffy and the gang, Spike is captured by a commando squad for The Initiative, a mysterious underground laboratory beneath the streets of U.C. Sunnydale. Meanwhile, Buffy's Psych T.A., Riley, has a major slayer crush and turns to Willow for advice on ways to woo.[1]

Riley, Forrest, and Graham watch as Buffy makes a mess of the soda and yogurt machines in the cafeteria. Forrest and Graham comment on how attractive she is and how interested in her they are, but Riley is reluctant to make fun.

Giles and Xander discover the commando guys are human and that their help will not be needed, again. Buffy arrives and while Giles tells her to patrol, she says she's going to party with Willow and hopefully cheer her up.

Spike, having previously been knocked out by a taser, wakes up in a facility where various types of demons are held captive behind electrically charged barriers. A packet of blood drops from the ceiling into Spike's cell but before he drinks it, a vampire in the next cell — Tom — warns him that doctors starve the vampires and then feed them drugged blood before doing experiments on them. Tom mentions that he was captured after his gang took on Buffy, making Spike come to the conclusion that the Slayer is behind his capture.

In class Willow asks about Oz, but Riley tells her that he's dropped out of college. After Willow tries to tell him that Oz will return, Professor Walsh informs her that he won't be welcome in her class, which upsets Willow and she quickly leaves. Buffy approaches the professor, and tells her off, prompting Walsh to comment to Riley that she likes her.

Forrest asks Parker about Buffy, and when Parker vulgarly brags about having sex with her, Riley punches him. Riley then realizes he likes Buffy.

Spike lies on the floor of his cell, pretending to have drunk the drugged blood, and when the doctors come to get him he attacks. He lets Tom out of his cell, but this is only to use him to aid his escape (which he does by pushing him into approaching commandos, resulting in Tom being quickly dusted). Riley visits Willow and asks her advice in wooing Buffy. Willow, still emotionally distressed, questions his motives but eventually relents, listing some of Buffy's likes and interests. After escaping from the Initiative, Spike returns to Harmony's lair, telling her he's "back for good" — then immediately leaves to kill Buffy.

At the party, Willow tries to help Riley flirt with Buffy with little success but is upset when a Dingoes Ate My Baby song starts playing and decides to leave. Xander discovers Harmony crying, burning some of Spike's things. The two get into an inept slap-fight, and then mutually agree to stop. Harmony lets Xander know that Spike is back. Xander interrupts Riley's renewed attempt to chat Buffy up to inform Buffy that Spike has returned. Riley is also called away; he and Forrest break away from the party and, after passing through several electronic checkpoints, go down a hidden elevator to the underground facility where Spike had been held. The operation's head, Professor Walsh, informs them that Hostile 17 — Spike — has escaped, and the guys suit up. Riley gives orders to three teams that he sends out all over Sunnydale to find Spike.

Riley's team spot Buffy sitting on a bench. Riley says she won't be their bait and goes out to get rid of her. Each unaware of the other's secret identity, Riley and Buffy try to send each other out of harm's way.

Meanwhile, Spike has found Buffy's dorm through the school computer system. Inside, Willow is feeling miserable and when the door knocks she calls out to come in without thinking, only for Spike to swagger through the door. Willow tries to get away, but Spike throws her against the bed and attempts to bite her, only to be stopped by an intense pain in his head. Willow hits him with a lamp and runs out just as Riley and friends cut the power and then work their way up to the dorm room. They capture Spike but, while they consider whether to take Willow or not, Spike breaks free and uses a fire extinguisher as a shield, filling the corridor with smoke. Buffy arrives and fights Riley and his friends while Spike manages to escape through a window. Buffy and Riley continue to trade blows, each unable to identify the other. Seeing that Spike has escaped, Riley orders them to retreat.

Professor Walsh is not happy with what happened or with Riley's report on the event but he confirms that Walsh's inhibitor chip works, and Spike cannot kill or even harm a human without feeling pain thanks to an implant they placed in his head. Riley catches up with Buffy and they talk. Buffy tells him he's a little peculiar, which he says he can live with.

Xander: "Just setting the mood, big guy."
Giles: "I don't think I ever fully appreciated how Buffy deals with this every night."
Xander: "Buffster's the champ. Way she deals with the boredom. The violence. And all without these tasty little cucumber sandwiches to keep her going..." [Xander reaches into a brown paper bag. Fishes about. Empty.] "Hey, who ate the last one?"
Giles: "Still, it's nice to be able to make oneself useful. I dare say we'll see some action before the night is through."
Xander: "Commandos'll never see us coming. We're shadows, we're the wind, unseen and un--
Lost Freshman: [offscreen] "Excuse me? You guys know which way's Mather House?" [Pause. Giles points.] "Thanks." 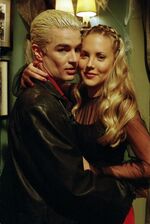 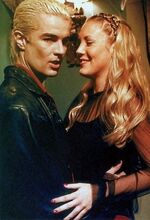 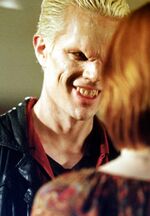 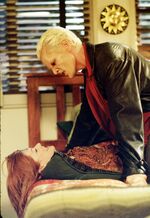 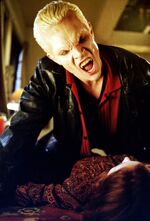 "Their worst fear is realized… Spike will sink his teeth into one of them."