"The I in Team" is the thirteenth episode of the fourth season of Buffy the Vampire Slayer television show, and the sixty-ninth episode in the series. Written by David Fury and directed by James A. Contner, it originally broadcast on February 8, 2000 on The WB.

FRIEND OR FOE — Buffy's friends become hurt and concerned when her involvement with Riley and the Initiative becomes more intense. Meanwhile, Professor Walsh sends the slayer on a mission that brings her close to revealing a dangerous secret.[1]

Willow, Anya, and Xander play poker and discuss Xander's plans to start selling Boost bars. They question the intentions of Riley and the Initiative. Buffy impresses Professor Walsh as she quickly passes a test of her strengths and fighting talents. Buffy talks about her night but Willow's quiet evening spent with friends doesn't seem to compare. The Scooby Gang has plans that night to meet at the Bronze.

Giles visits Spike at his new crypt and gives Spike his money. Spike tries to make it clear that he has no interest in helping them anymore. Riley takes Buffy into the Initiative, which she is incredibly impressed to see. Led by Professor Walsh, Buffy is given the tour of the facility, and then is basically made a member of their team. Tara tries to give a Doll's Eye Crystal to Willow, but Willow doesn't want to accept, because it is Tara's family heirloom. Professor Walsh enters the secure labs and the room 314. After exchanging words with her colleague, Dr. Angleman, Professor Walsh checks up on her special project, a part-demon, part human creature named Adam.

Buffy is an hour late meeting her friends, and when she does show, she brings Riley and other Initiative members. Willow and Buffy talk about things, and Buffy reveals that she's now working with the Initiative. Willow questions how much trust Buffy should put in with them, and then Buffy rushes off with Riley and friends when all of their pagers go off. After being abandoned by Buffy, Willow goes to Tara's dorm room. Buffy and the commandos go out in teams to find and bring back a Polgara demon. Forrest is head of his own team, but is still upset because Buffy took his spot on Riley's team.

Forrest spots "Hostile 17" — Spike — and sends his team after the vampire. As Spike is running away, they shoot him with a tracer so that they'll be able to keep track of his location. The demon attacks; Buffy and Riley team up and fight it together. Afterward, they go to Riley's dorm room and have sex. Professor Walsh watches from a secret camera hidden in Riley's room.

Desperate, Spike goes to Giles for help and is forced to give up the last of Giles's money in exchange for that help. The next morning, Buffy is surprised to see Riley is still in bed by her side when she wakes. They talk, but when Buffy asks about 314, Riley gets a call from Professor Walsh, requesting his help. Walsh talks with Dr. Angleman and they decide it's time to go ahead with their plan to get rid of Buffy.

Giles tries to remove the tracer from Spike's shoulder, but it's difficult and they don't have much time. Buffy gets back to her dorm room just as Willow is also returning from her night out, now carrying the crystal she had previously refused to accept from Tara.

Buffy is beeped by the Initiative and is sent on a new mission — to find a class 3 (not very dangerous) creature and transmit a picture of it to Maggie Walsh. She is told it will be an easy mission. Wearing a microphone and camera, complete with a heart monitor, Buffy goes on the mission alone, but it turns out to be a trap set by Professor Walsh. Instead of being a small and non-dangerous demon, it turns out to be two very large demons who are both armed, and who Buffy had previously seen imprisoned at the Initiative. Steel doors slam shut, trapping Buffy in a small area of the sewers with the demons. She attempts to use the Initiative weapon that Professor Walsh gave her, but it is defective and doesn't work. Meanwhile, Riley is kept out of the way by being sent out with a team to find and recover Hostile 17.

With Willow doing a spell to mask the tracer's signal from the Initiative to buy them time, and Spike passed out from drinking, Giles continues his attempts to get the tracer out of the vampire's shoulder. It is finally removed and flushed down the toilet just in time to save Spike from Riley and his team.

Buffy fights with the two demons, while Professor Walsh watches a screen at the Initiative that is hooked up to the feeds from Buffy's monitor and camera. Buffy fights and the heart monitor loses her heartbeat when she drops it to the ground. When Riley returns from his mission, Professor Walsh informs him that Buffy is dead, and makes up a story about Buffy going out on her own to attack some demons, despite protests from Maggie. At that point, having killed the two demons, Buffy comes on to the camera feed and informs Walsh that her attempts to kill the Slayer failed. Riley sees this, and then walks out on Walsh, while she's pleading with him to come back.

Buffy returns to Giles's place, now very upset that the Initiative cannot be trusted and that it probably has it in for all of the Scoobies in addition to herself. An agitated Walsh goes into room 314, where there is the Frankenstein-like creature, Adam. She unleashes him and starts talking about what she is going to do with Buffy. An arm from the Polgara demon Buffy and Riley were sent out to capture has been attached to him. The Initiative has not only been running tests, but using various body parts from demons to build Adam. When Adam wakes, he spears Professor Walsh with a skewer from the Polgara arm, speaking one word: "Mommy".

Buffy: "Slick trap you set for me. Sorry to disappoint you, but I killed your two pets. There's a couple of research grants down the drain. Oh, and about you trying to kill me? I'd say that's an issue you and I need to discuss. So get ready. I'll be paying you a visit. Real soon." 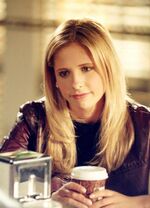 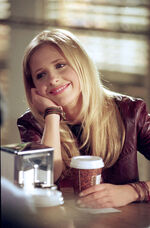 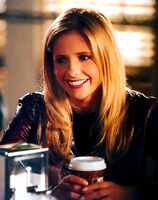 "She could be falling in love… with her greatest enemy."
Add a photo to this gallery

Retrieved from "https://buffy.fandom.com/wiki/The_I_in_Team?oldid=212238"
Community content is available under CC-BY-SA unless otherwise noted.