The Heart of a Slayer, Part Two

The Heart of a Slayer, Part Two is the twenty-seventh issue of the Buffy the Vampire Slayer Classic comic book series. It was written by Chris Boal and illustrated by Cliff Richards.

In “The Heart of the Slayer,” Buffy discovers why she is being stalked by a nightmare creature from fourteenth-century France and why that era’s Slayer is determined to stop it. Unfortunately for the two Slayers, stopping the monster may mean the ultimate sacrifice for one of them! The dynamic creative team of Chris Boal, Cliff Richards, and Joe Pimentel conclude the creepiest Buffy story yet. Do not miss this one![1] 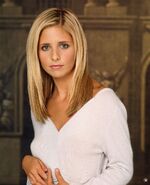 Retrieved from "https://buffy.fandom.com/wiki/The_Heart_of_a_Slayer,_Part_Two?oldid=210382"
Community content is available under CC-BY-SA unless otherwise noted.