This episode picks up where the series premiere left off. Luke is about to finish off Buffy, who is trapped in a stone coffin, but is repelled by the silver cross that a mysterious stranger had given her earlier that evening.

Buffy escapes the mausoleum and saves Xander and Willow from vampires in the graveyard. Darla has taken Jesse, however. She and Luke inform The Master that there is probably a Slayer in town. The Master decides to use Jesse as bait.

Giles and Buffy give Xander and Willow a brief introduction to the world of vampires, demons, and Slayers. Willow accesses the city council's plans for Sunnydale's tunnel system. In a flashback, Buffy realizes that there must be an access to it in the crypt. Xander is hurt when Buffy declines his help and follows her anyway.

Willow is researching the Master in the computer lab when Cordelia trash-talks about Buffy and insults Willow again. In a fine show of nerd revenge, Willow convinces Cordelia to press the DEL key to "deliver" her assignment. It ended up erasing her hard work. The dark stranger appears just as Buffy is about to enter the tunnel system in the crypt. He is named Angel. He gives her directions to The Master's lair, but only wishes her luck after she is out of earshot.

Xander catches up with Buffy, wanting to help save his friend. They enter the lair and managed to find him. But upon trying to find their way out, they're ambushed by vampires to which Jesse, upon hitting a dead end, reveals he is also as well. Buffy and Xander barely manage to escape via a vent leading to above ground, with Xander pulling Buffy out of a manhole. Underground, The Master is unhappy about their escape and punishes the vampire Collin by poking his eye out. Luke drinks the Master's blood, turning Luke into the Vessel. Every soul Luke now takes will give the Master more strength to break out of his confinement.

Buffy and Xander return to the library. Giles explains that the Master arrived 60 years ago to open the Hellmouth, a portal to another reality, but was swallowed by an earthquake. He is now hoping to escape with the help of a Vessel in a once-in-a-century opportunity called "The Harvest." To prevent the Master from escaping and opening the Hellmouth, they must kill the Vessel. Xander suggests that the vampires will be at the Bronze.

On her way there, Buffy swings by her house to get weapons, and is promptly grounded by her mother, who has been called by the Principal about Buffy skipping classes. Buffy grabs her weapons from a secret compartment of a chest and climbs out of the second-floor window. Giles, Xander and Willow head to the Bronze to back her up with Giles warning the two (specifically Xander) that the Jesse they know is dead and all they will see of him now is "the thing that killed him".

Luke and other vampires burst into The Bronze and start the killing. Buffy arrives in time to save Cordelia. She also notices the Vessel mark on Luke's forehead. Xander ends up staking Jesse with unknowing help from a fleeing man. Willow pours holy water on Darla when she is about to bite Giles.

Buffy tricks Luke to win her fight, making him believe an outside light is the sunlight from Daylight Savings Time, and then staking him while he has his back turned. With Luke dead, the Master's plan fails and he weakens again, but is not destroyed. The other vampires flee. Outside The Bronze, Angel realizes that Buffy has done it. "I'll be damned," he says.

The next morning, Cordelia exemplifies the denial most Sunnydale residents undergo after paranormal encounters. Giles warns the budding gang of more battles ahead, which they accept more nonchalantly than he would like as Buffy, Willow and Xander go off and discuss to see how Buffy could get herself get kicked out of school while Giles looks on after them as they walk on, while saying to himself "The Earth is Doomed". 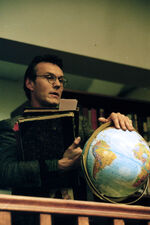 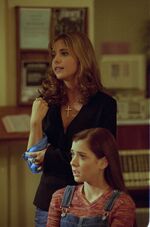 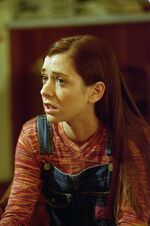 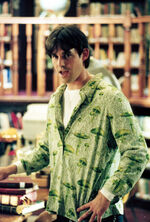 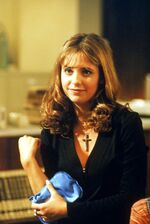 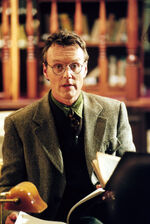 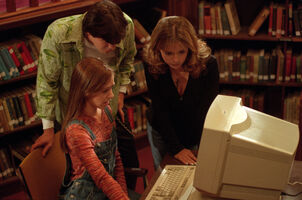 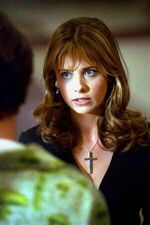 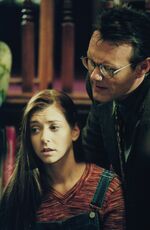 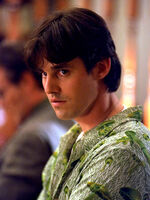 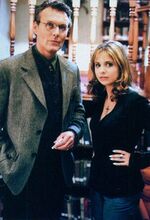 Retrieved from "https://buffy.fandom.com/wiki/The_Harvest?oldid=172014"
Community content is available under CC-BY-SA unless otherwise noted.