"The Harsh Light of Day" is the third episode of the fourth season of Buffy the Vampire Slayer television show, and the fifty-ninth in the series. It was written by Jane Espenson and directed by James A. Contner. It was originally broadcast on October 19, 1999.

Spike returns to Sunnydale for an artifact that will make him invincible; Buffy tries to return to the dating pool.

While Dingoes Ate My Baby play The Bronze, Buffy talks to Willow while also secretively watching Parker play pool. After the Dingoes wrap, Oz gets ready to take Willow home and Parker volunteers to take Buffy back to her dorm. While Willow is waiting for Oz and Devon to return to the van outside The Bronze, Harmony approaches her. The two of them talk and then Harmony reveals she's a vampire and bites Willow. Oz rescues her and Harmony goes away, threatening that her boyfriend is not going to be happy that they were mean to her. Buffy and Parker walk back to the dorm, and Parker discovers her scar from when Angel bit her. She tells him it was an angry puppy that bit her. He then asks her to a party the next night and she accepts.

At Giles' place, Xander is helping him put books away when Anya, having returned to Sunnydale, makes a surprise visit. She wants to know where her relationship with Xander is going, and not aware that they actually had a relationship, Xander is a bit confused. Back at the dorms, Buffy and Parker are just about to kiss when Willow and Oz arrive. While Oz cleans her wound, Willow fills Buffy in on everything, including Harmony's supposed boyfriend. Underground, a group of vampires are digging. Harmony approaches the leader who is also her boyfriend… Spike.

As Spike attempts to play the tough-guy against one of his worker vamps regarding their digging through the floor of a crypt, Harmony asks him to kill Willow, using her nickname for Spike which is 'blondie-bear'. Spike isn't keen, since killing Buffy's best friend would set her on to them. Harmony then complains that she wants to go out, and after the use of some feminine charm, he agrees to take her out to a party.

The party happens to be the same one Buffy and Parker are attending and the two couples run into each other. A thoroughly amused Buffy teases Spike about being with Harmony and the two vampires flee. Buffy pursues them and she and Spike fight. Harmony reveals that Drusilla left Spike for a fungus demon and that they'll be back as soon as they get the Gem of Amara, to Spike's utter irritation. Anya shows up at Xander's place and after getting her a drink, he turns around to see that she's naked. Buffy calls Giles and informs him about Spike and Harmony. Giles tells Buffy that the Gem of Amara was rumoured to contain great power if a vampire was ever to get a hold of it, but was concluded to have never existed when they scoured the Earth looking for it and found nothing. Giles decides to research it in case, Buffy says she's going to sleep but instead, goes back to the party with Parker.

Xander is shell-shocked that Anya is standing in front of him completely naked, as she explains that having sex is the best way for her to rid herself of her feelings for him. Xander attempts to refuse, telling her that having sex is supposed to be about more than that, but in the end can't refuse what he's being offered.

In their bedroom, Harmony and Spike lie together and it quickly becomes clear that he doesn't hold nearly as much affection for her as she does for him, considering her to be nothing but annoying as she drones on about relatively unimportant things. Harmony, however, starts flirting with him, and the two soon start having sex.

After having a nice time at the party, Buffy and Parker discuss Parker's decision to take History and he speaks about making choices. Buffy finds herself enraptured with Parker's deep thoughts, and afterwards decides to make her own choice and sleeps with him.

The next morning, Buffy wakes up to an empty bed, and as she's searching for her clothes, Parker arrives with coffee. He says that he'll call her. Anya tells Xander that she's over him, and when he says he's okay with that, she storms out in anger. Spike wakes up to Harmony drawing on his back with lipstick and then leaves to get back to work, but not before sending some stinging insults her way. Buffy finds Willow and Giles in her dorm room; they tell her that an ancient text was found that places the Gem of Amara in Sunnydale. After they get rid of Giles, Buffy tells Willow about her night with Parker. She then waits for Parker to call her all day, but he never does.

Below ground, as Spike starts breaking into the crypt, Harmony balks when she's told she can't go back outside and complains. As a result, Spike puts her in her place with some harsh verbal abuse. When he finally breaks into the crypt, Harmony tags along. An irritated Spike tells her to take anything else she wants, and looks for the Gem of Amara. Seeing an elaborate pendant, he assumes that to be the gem and puts it on but feels nothing. When he tries to pick up a cross it burns him as it normally would. Harmony prattles on, and Spike finally loses all his patience and stakes her with a jagged piece of wood… however instead of turning to dust, nothing happens to Harmony and the wound instantly heals itself. Spike realizes the ring Harmony picked up randomly is the Gem of Amara and tries to force it off her. Upset, Harmony just gives him it and Spike, knowing that the ring will render him invincible to all vampire weaknesses, including daylight, decides to go outside.

At Giles' place, while they search for answers, Xander finds a TV and turns it on. They watch the news and see that there was a sinkhole caused by the erosion of dirt beneath it. They come to the conclusion that it was Spike's underground digging that caused it. Giles sends Xander to find Buffy while the others will head to the sinkhole. As Xander looks for Buffy, he runs into Anya who tries to talk to him about the previous evening and her feelings, but he's distracted and blows her off. In the crypt Giles, Willow and Oz confront a crying Harmony who confirms Spike has the ring.

Buffy tracks down Parker, but she finds him putting the same moves he used on her on another girl. She asks him if everything is okay, and Parker, completely casual, tells her it is. She asks if he wants to do something, but Parker refuses citing earlier plans and attempts to rush off. Buffy asks if she did something wrong, but Parker assures her she didn't and he had a lot of fun. Buffy realizes that, while their night together meant a lot to her, for him it was nothing more than casual sex. He reminds her that it was her that put the moves on him, and claims that he thought they were on the same level. He then quickly leaves, telling Buffy that he'll call her when he clearly has no intention of doing so. As Buffy reels, she turns around when she hears a familiar voice and Spike hits her.

Buffy and Spike have a huge fight outside. She tries to stake him, to no avail and he reveals the ring that is protecting him. Xander shows up, but Spike quickly knocks him out of the way and continues to beat up Buffy. As he does, he notes that Buffy and Parker didn't seem to know each other that well and that she fell for his trick of playing a sensitive side and getting her to seduce him. He then mocks her by telling her that she must not be worth a second go, and jokes that Angel told him as much  An enraged Buffy pummels Spike and takes the ring from him. Smoking from exposure to the sun, he dives down into the sewers. Later, Buffy and the gang sit around at Giles' place and Buffy decides that she wants Angel to have the ring. Oz volunteers to take it when he goes to L.A. for a gig.

Buffy talks to Willow about what happened with Parker, wondering if every guy she sleeps with will end up evil the next morning. Willow assures her that she just made a mistake, but despite how badly he's treated her Buffy is still hung up on him and wonders if it was something about her that put him off despite Willow insisting it isn't. Buffy decides to take a walk and as she does, so do Anya and Harmony. They all walk separately around campus, their minds very much on the men in the lives and their conflicting feelings about them.

Willow: "You know what else I love about college? How when the professor comes in, the class gets all quiet."
Buffy: "Oh, I hate that. I'm always like, what? Did something scary come in? Do I have to kill it?"

Devon: "Man, that looked like Harmony. Weird. I saw her get bit at graduation. I didn't tell you?"

Parker: "Buffy? When you...drowned, whoever brought you back? They're getting a big kiss from me."
Buffy: "Xander will be so happy."

Xander: "This is just, I'd say out of nowhere, but that doesn't really capture the amount of nowhere which it's out of."

Buffy: "I think you two should go."
Spike: "But the fun's just starting: old friends, lots to drink..."

Xander: "So...you're my first guest at Casa del Xander - not the final name, still working on it."

Buffy: "I mean, I thought Spike and Dru were a forever kind of deal, didn't you? Where's the commitment?"
Giles: "I'm disillusioned. I shall never love again."

Buffy: "It doesn't feel like it. To me, a lot of the time, it feels like stuff's just coming at me, you know, and I'm reacting as fast as I can, just trying to keep going. Just - just trying to be on my feet before the next thing hits."
Parker: "That sounds exhausting."
Buffy: "It really is."

Parker: "Okay, I'm a little confused now. I mean, I definitely got the idea you'd done it before. You were the one who was all over me. It was fun."

Willow: "Well, from what I understand, pretty much. But it won't always be like that. You've just had some really bad luck."
Buffy: "I don't know, Will. Bad luck just happens. I made this happen."
Willow: "Well, why shouldn't you, if it's what you want? I mean, as long as it's safe. Oh, Buffy, it was safe, wasn't it?
Buffy: "It was safe. It's not that. It's that the whole time, I kept thinking, hey, look at me with someone who isn't Angel. Look how much I'm not hung up with Angel anymore. Look how this is not all about Angel. God, how come I didn't see it?" 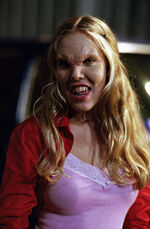 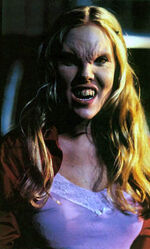 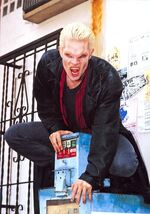 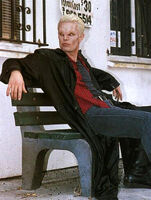 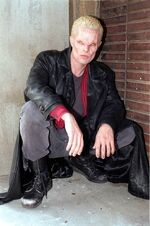 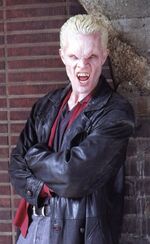 "All New WB Crossover Event! Tonight, good and evil fight for the key to eternal life. The battle begins at sunset… and continues into daylight."
Add a photo to this gallery

Retrieved from "https://buffy.fandom.com/wiki/The_Harsh_Light_of_Day?oldid=183053"
Community content is available under CC-BY-SA unless otherwise noted.