"The Girl in Question" is the twentieth episode of the fifth season of Angel television show, and the 108th episode in the series. Written by Steven S. DeKnight and Drew Goddard and directed by David Greenwalt, it was originally broadcast on May 5, 2004 on The WB network.

DARLA, DRUSILLA AND ANDREW RETURN AS ANGEL AND SPIKE SEARCH FOR BUFFY — Angel and Spike travel to Rome with plans to rescue Buffy from their old nemesis The Immortal. While in Italy, they also attempt to retrieve the head of a fallen demon leader to prevent a perilous power struggle between several warring demon clans.[1]

Gunn discovers a demon gang war is imminent, unless the head of the deceased leader of the Goran Clan is retrieved from Rome so that he may be resurrected. Angel initially tries to send Spike there, but he refuses. Angel then receives a call informing him that the Immortal was found near Buffy, so he immediately leaves. Spike hears of this and decides to come along, much to Angel's chagrin.

Once on the airplane, Angel points out that Spike is going to try and win over Buffy again and Spike says he's doing the same. Angel retorts that he has a girlfriend, but Spike points out that Nina doesn't know that he's traveling all the way to Rome to visit his ex. Spike asks Angel how he knew Buffy was in danger, and Angel mentions "a source." Spike mocks the fact that Angel sent a spy to do his "stalking" for him, but Angel defends himself explaining that he just wanted to make sure Buffy was safe.

Angel and Spike reach Buffy's apartment in Rome, but instead they find Andrew Wells. He explains that Buffy and Dawn have been letting him live here since "that thing happened," apparently a "cultural misunderstanding" that led to the destruction of his house. He asks them what they are doing here and they both bring up Buffy. Andrew explains that she went to meet the Immortal. Angel and Spike decide to go and find her, assuming she's in danger until Andrew reveals that Buffy is actually dating their arch-nemesis the Immortal.

It's 1894, in Italy, Angel and Spike are freed from chains after being kept by minions of the Immortal. They return to Darla and Drusilla to witness a bedroom just after the Immortal had sex with the two simultaneously (something the ladies had never allowed Spike or Angel to do). To make matters worse, the ladies both enjoyed the experience immensely.

Back to current events, Angel and Spike conclude that Buffy must be under some sort of love spell. They question why else would she be dating a dark, centuries-old supernatural creature who may or may not be evil. They then locate and retrieve the requested head of Capo di Famiglia.

The two return to the apartment again, but Andrew informs that Buffy still isn't back yet, but instead at the club. They go to the club and see the girl from a distance dancing with the Immortal. Angel and Spike start to fight over Buffy, as Angel taunts him by saying Spike won't be with her again. Spike admits that he doesn't think he has a chance with her, but he still cares about her and won't let her end up with either the Immortal nor Angel. Angel then says what he and Buffy have is a "forever love," but Spike scoffs that he had a relationship with her as well. Angel retorts that having sex is not a relationship, but Spike points out "it is if you do it enough times." In the midst of their arguments, they leave the demon head in a bag on a table, and it is filched by the Immortal's demon butler.

Angel and Spike fight the minions and hit each other a few times, too. The demon butler gets away with the head and mocks the heroes as he leaves. They unsuccessfully try to get the bag back but again fail. Angel states that they'll just get the head and leave, but that earlier statement is quickly contradicted as they are again at the club, looking for Buffy, only realizing that she already left. Angel laments that the Immortal has Buffy and questions why do things like this always happen to them. Angel and Spike argue over how "if they had all their resources," they would be able to find the head. Spike points out that there is a Wolfram & Hart Rome branch.

Meanwhile, at Wolfram & Hart in L.A., Fred's parents show up and Wesley ushers them into his office. As he is about to tell them she has died, Illyria walks in the door looking and acting like Fred. Later, while her parents are being shown Fred's office, Wesley confronts Illyria. She explains that Wesley's grief is unbearable so she could not bear to witness the grief of Fred's parents as well, and she's capable of appearing in the form that she wishes. After Fred's parents leave, Wesley asks her if she got what she wanted from that experience. Illyria answers "Yes," and Wesley orders her never to do it again.

Angel and Spike go to Rome's Wolfram & Hart offices, which are identical to the LA offices, where they are greeted by the CEO. She says the demon head is being held in a standard ransom situation. Angel and Spike want to fight, but she explains that they have a civilized way to do this. They are given money for the drop, which they exchange with the butler for the bag, which they open as its bomb inside explodes. Spike complains about his jacket being ruined.

They go back to the Rome's Wolfram & Hart, where the CEO laughs, saying criminals always do that to first-timers. She also replaces their damaged clothing with a number of similar jackets. Spike and Angel declare their intention to go home, but return to Buffy's apartment once again. Andrew tells them to let Buffy move on, while he, clad in a tuxedo, leaves the apartment with two Italian women. Frustrated by their inability to contact Buffy and by the demon butler's chicanery on the Immortal's behalf, they decide to go home.

Illyria follows Wesley into his office, still appearing and speaking as Fred. She states that she wishes to explore the relationship further and does not understand why Wesley is angry about it, since he obviously loved Fred. He replies that she is not Fred and that he is sickened by the sight of her. He tells her to be anything as long as it's not Fred. She appears somewhat confused and when he leaves the room changes back into her usual form.

Angel and Spike return home and Angel tells Gunn to start preparing for the gang war, only for Gunn to tell him the demon head is waiting on his desk. Indeed, they find the head with a note signed by the Immortal. Alone in the office, Angel and Spike repeatedly declare their intention to get over Buffy and move on with their lives. 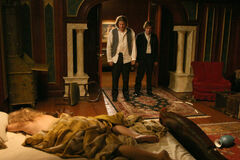 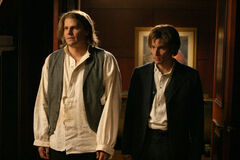 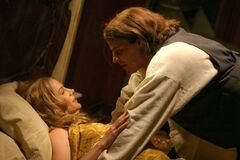 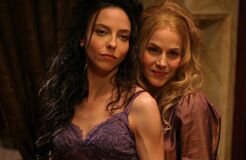 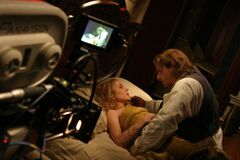