"The Freshman" is the season premiere of the fourth season of Buffy the Vampire Slayer television show, and the fifty-seventh episode in the series. Written and directed by Joss Whedon, it originally broadcast on October 5, 1999 on The WB network.

Buffy and Willow are on a stakeout at the cemetery while discussing which classes Buffy should take for her first semester at college. They discuss the fact that Buffy is choosing her courses at the last second, which she credits to a busy summer of slaying and that Giles has told her to start keeping her identity as the Slayer under wraps again. The vampire they're waiting awakens and prepares to attack them, and they don't even notice when he quietly slips away when he sees their arsenal of vampire-slaying gear.

Buffy arrives at her new dorm room in Stevenson Hall. She has already moved in and her new roommate Kathy is in the process of doing so. Kathy tells Buffy that she can tell that she is cool and thinks the upcoming year will be "super fun", and she hangs a poster of Céline Dion, much to Buffy's chagrin. During the night, Buffy has trouble sleeping because Kathy snores, laughs, and smacks her lips in her sleep.

Buffy attends a class the next day in order to find out if enrollment is still open, however when she asks the person next to her about it, the professor humiliates her and throws her out. Later, with Willow and Oz, she attends Psych 105. Professor Walsh jokingly states that those students not in her good graces will come to know her as "the evil bitch monster of death." Students who stay in her favor will come to know her simply as "Maggie". Buffy is further unnerved, realizing that college is going to be far harder than high school was.

That night, she meets Eddie, another freshman student who is just as overwhelmed as she is by the new environment. They discuss their need of a "security blanket" in their unfamiliar surroundings. Eddie tells Buffy that his security blanket is the novel Of Human Bondage, which he has read ten times and keeps by his bed, while Buffy's is Mr. Pointy. They then go their separate ways, and Eddie runs into a gang of vampires led by Sunday. The group break into Eddie's dorm room and taking all his stuff, leaving behind only a note on the bed.

The next day, Buffy looks for Eddie in psych class but can't find him. She goes to his dorm room to find the note and empty room, with the resident assistant explaining that some students can't handle the college life and bail out early on. Although, as Buffy sits down, she spots Of Human Bondage still in his nightstand and suspects something is wrong. In Sunday's lair, the vampires go through Eddie's belongings. Sunday bemoans that they don't go after cooler people and gets ready to go on that evening's hunt. Laying dead on the floor, Eddie's eyes snap open.

Buffy visits Giles to find a half-naked female visitor in his apartment. The woman is an old friend named Olivia who refers to Giles as "Ripper". Buffy tells Giles of the mysterious disappearance and tells him they need to start researching to find out what's going on, but Giles is reluctant to help. He reminds Buffy that he is no longer her Watcher nor does she have one anymore, and now she's growing up she has to learn how to handle these things herself. Buffy leaves, while Giles reminds her he'll always be there if she really needs him.

That night Buffy runs into Eddie in a deserted part of campus. He tries to attack her, and she stakes him without trouble. The group of vampires that turned Eddie were watching, and Sunday attacks Buffy. Buffy is soundly thrashed by the vampire while the others watch. With her arm sprained, she runs. Buffy is shaken by the fight and goes home the next day. She finds her mother surprised to see her home so soon, and discovers that she is using Buffy's room as storage space for the gallery. The phone rings and Buffy answers, but the caller hangs up.

When Buffy returns to her dorm room, she finds all of her belongings missing and a note similar to that found in Eddie's room. She goes to the Bronze and she thinks she sees Angel from afar, but it turns out to just be a guy who looks like him. As she mopes, Xander suddenly appears behind her, having returned from his trip a couple of days earlier. He reveals that his car broke down in Oxnard and his tour of America didn't happen, but instead he spent a month and a half washing dishes at Ladies Night club earning money for repairs (which mercifully came to an end when a male stripper fell ill, although Xander refuses to elaborate further). Xander also says that he now lives in his parents' basement and has to pay rent. Buffy tells Xander about Sunday, and that she doesn't want to intrude on Willow and Oz's first days in college by involving them. She then admits that she doesn't think she'll be able to handle the new environment. Xander tells Buffy that in the darkest times of his life he would get through it by thinking about what she would do and that she's his hero. Buffy is touched to hear this, and Xander pledges his full support in stopping Sunday.

The two research and find that the student disappearances started at the same time that a fraternity lost its charter, and its house has been lying empty while zoning issues dragged on. Heading there, the two spy on the vampire group through the skylight as they root through and laugh at Buffy's possessions. Xander decides to round up the rest of the gang while Buffy remains behind to keep watch, only for the skylight to give way from under her, landing her right in front of Sunday and the other vampires.

Tom, one of the only surviving vampires from Sunday's lair, runs away from the scene. He is suddenly stunned with a taser, and three masked men armed and dressed in camouflage fatigues approach the vampire. 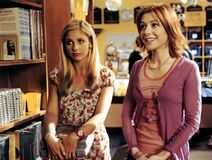 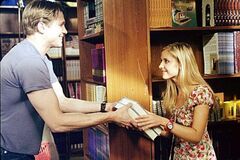 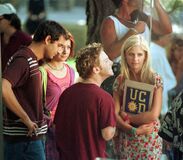 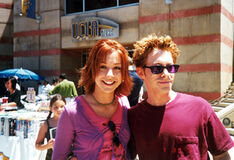 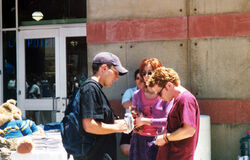 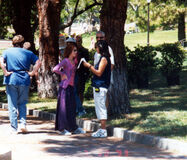 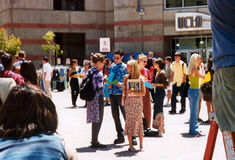 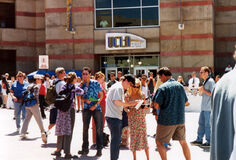 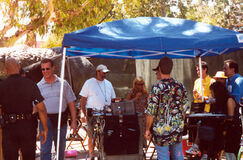 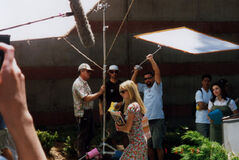 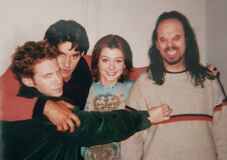 "Season Premiere: College can be terrifying…"
Add a photo to this gallery

Retrieved from "https://buffy.fandom.com/wiki/The_Freshman?oldid=212067"
Community content is available under CC-BY-SA unless otherwise noted.