The Death of Buffy, Part Two

The Death of Buffy, Part Two is the forty-fourth issue of Buffy the Vampire Slayer Classic comic book series. Written by Tom Fassbender and Jim Pascoe, and illustrated by Cliff Richards, it was originally published on May 1, 2002 by Dark Horse Comics.

The "Death of Buffy" story continues as Willow, Xander, and the gang attempt to fend off an encroaching invasion of black magic lizard wizards. They've come to Sunnydale to resurrect an old friend and to tear the Slayer's pretty little guts out. Unfortunately for them, Buffy and her guts are six feet under. Unfortunately for Buffy's pals, these reptiles are willing to settle for the guts of the Slayer's friends and family.[1] 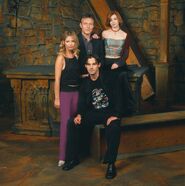 Retrieved from "https://buffy.fandom.com/wiki/The_Death_of_Buffy,_Part_Two?oldid=210367"
Community content is available under CC-BY-SA unless otherwise noted.