The Death of Buffy, Part Three

The Death of Buffy, Part Three is the forty-fifth issue of the Buffy the Vampire Slayer Classic comic book series. Written by Tom Fassbender and Jim Pascoe, and illustrated by Cliff Richards, it was originally published on June 5, 2002 by Dark Horse Comics.

Buffy is dead. A horde of lizard-demons plan to resurrect their fallen leader and paint the town blood red. Can Buffy's friends face the threat without a Slayer to defend them? Willow finds that she can learn a great deal from these reptilian mystics. And if there's going to be one resurrection, why can't there be two?[1] 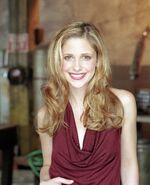 Retrieved from "https://buffy.fandom.com/wiki/The_Death_of_Buffy,_Part_Three?oldid=210368"
Community content is available under CC-BY-SA unless otherwise noted.