The Board Game is a board game based on the Buffy the Vampire Slayer franchise. It was developed by Lynnvander Studios and published by Jasco Games on October 28, 2016.

In this fully cooperative game, you help Buffy and her friends to defend the town of Sunnydale from an onslaught of vampires and demons, while ultimately attempting to foil the Big Bad's plot and prevent the Hellmouth from opening. You'll have to work together, using all of your resources, including special character abilities to defend the helpless townies. In this game, you'll play as your favorite characters from the show, characters from Buffy herself to Willow or Spike. For 1 to 6 players, it can be played in 40 to 60 minutes. 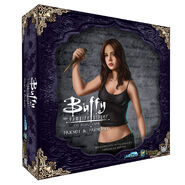 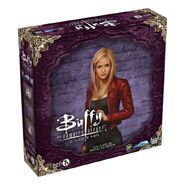 Cover in Spain
Community content is available under CC-BY-SA unless otherwise noted.