The Blood of Carthage

The Blood of Carthage is the sixth volume of Buffy the Vampire Slayer Classic trade paperbacks, collecting issues twenty-one to twenty-five of the comic book series. It was originally published on April 4, 2001 by Dark Horse Comics.

The gang is off to college and Buffy's whole world is changing. How much education does a girl who's destined to kill monsters her whole life really need? To quell her confusion, Buffy throws herself into Slaying with wild abandon and disastrous results. Her killing of Sunnydale's answer to big foot may just bring about the rising of the demon Ky-Laag, and the end of the world. And the only group who know what's going on and who want to stop it, the mysterious Blood of Carthage, also want to kill Buffy for starting it all. What's a gal to do? This trade paperback collects issues #21–25 of the monthly series and is its longest and most involved storyline to date. The events in this story will have repercussions in the Buffy-verse for years to come, so do not miss it![1] 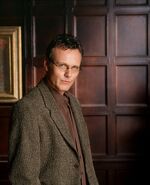 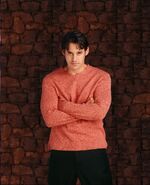 Cover in Spain
Add a photo to this gallery

Retrieved from "https://buffy.fandom.com/wiki/The_Blood_of_Carthage?oldid=225123"
Community content is available under CC-BY-SA unless otherwise noted.