"Ted" is the eleventh episode of the second season of Buffy the Vampire Slayer television show, and the twenty-third episode in the series. It was written by Joss Whedon and David Greenwalt, and directed by Bruce Seth Green. It originally broadcast on December 8, 1997 on The WB.

JOHN RITTER GUEST-STARS — The whole gang falls for Buffy's mom's new boyfriend, Ted — everyone, that is, except Buffy, who suspects there may be more to him than meets the eye. Meanwhile, Giles tries to repair his relationship with Ms. Calendar after her near-death experience with a demon; and still reluctant to let anyone know about their romantic involvement, Xander and Cordelia continue to hide their rendezvous from their friends.[1]

As Buffy, Xander, and Willow return from patrolling, they discuss the lack of vampire activity with Spike and Drusilla presumed dead. Angel, who is still recovering from his ordeal with Drusilla, has also confirmed the Order of Taraka has been called off. However, when the three enter Buffy's house, they find Joyce kissing a strange man.

Joyce introduces her friend, Ted Buchanan, a salesman. He tells them that he has been seeing Joyce for quite some time now. He charms Willow and Xander with computer talk and cooking, respectively. Ted promises to make it up to Buffy for surprising her. Buffy becomes uncomfortable with Ted's traditional mannerisms; this is not calmed by Ted's offer of miniature golf.

That night, Buffy beats a vampire to an unusual violence before killing him, worrying Giles that something is troubling her. She refuses to divulge, but Giles secretly has a good idea of what is happening. Later that night, Buffy asks Angel for his take on things, while she tends to his wounds. He says that her mother shouldn't be forced to be alone, and she should give Ted the benefit of the doubt. She reluctantly complies with this idea. Meanwhile, Giles approaches Jenny for the first time since she was possessed. She tells him that she's still not fully over what happened, and asks that he gives her space until she feels ready. He regretfully leaves, while Jenny is also left unsatisfied with how the encounter went.

The golf outing goes poorly, as Joyce has revealed Buffy's anti-social behavior. When Buffy cheats, Ted lectures and threatens her with a slapping out of sight of the group, but his cheerfulness comes back full force when rejoining everyone else.

Joyce doesn't believe this incident happened, claiming Ted thinks the world of her. Buffy recruits her friends to spy on Ted. Under an assumed name, Buffy talks her way into Ted's work space. He has never missed a day of work, doesn't get sick, and is getting engaged. Ted has a picture of Joyce on his desk but the part with Buffy is folded under.

The next day, after a talk with the cops, Buffy is in a haze of guilt. Willow and Xander discover Ted's cookies are drugged. Cordelia finds Ted has had four wives since 1957, all of whom have since disappeared. That night Giles patrols since Buffy is dealing with a lot already. Jenny surprises him to apologize for her earlier harsh words, but the conversation is derailed when a vampire attacks and Jenny attempts to shoot it. Instead of hitting the vampire, she accidentally shoots Giles in the side. As the vampire bursts into laughter, Giles uses the distraction to pull the bolt out of himself and dust the vampire. He and Jenny then laugh over the misfortune, as she takes him to the hospital.

Buffy again finds Ted in her room; this second fight reveals he is a robot. He escapes to find Joyce. The Scooby Gang investigates Ted's bunker, decorated in 50s style. Xander finds the four wives, all of whom are dead. Ted confronts an astonished Joyce. His malfunctions reveal his true intentions, and Buffy knocks him out with a frying pan. The next day, Joyce swears off men forever and says that from now on, the two Summers women shall be manless. Buffy suggests renting a chick flick.

The gang returns to school the next day, with Buffy cleared of all charges, and discussing their discoveries about Ted. Apparently the real Ted Buchanan was a sickly and unsuccessful inventor in the 1950s whose wife left him. In desperation, he built a robot version of himself, "a better Ted," possibly to be the man he thought his wife should have. The robot then kidnapped Ted's wife and held her captive in his bunker until she died. The robot then sought out other women resembling Ted's dead wife and repeated the process again and again.

All seems to have returned to normalcy, although Buffy, Willow, and Xander once walk in on adults kissing, this time the two being Giles and Jenny in the library.

Willow: I'm just saying that if Tennille were in charge, she would have had the little captain hat. 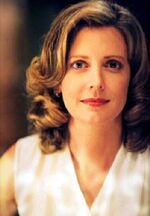 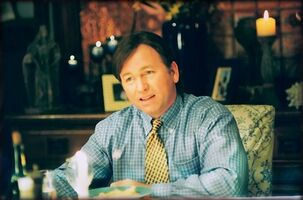 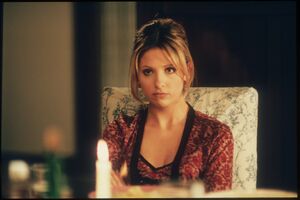 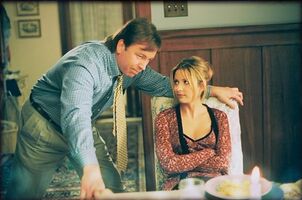 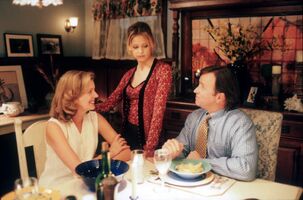 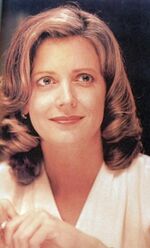 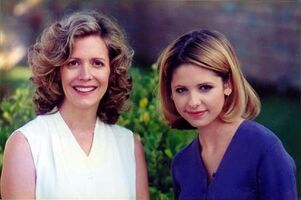 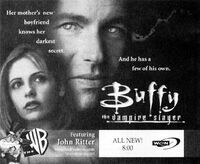 Retrieved from "https://buffy.fandom.com/wiki/Ted?oldid=217820"
Community content is available under CC-BY-SA unless otherwise noted.