One evening at the Bronze, Xander suavely saves the Slayer from a menacing vamp, then mounts the stage to play his guitar solo and "kiss her like she has never been kissed before." He is rudely awakened from this beautiful dream to find himself stuck in the hell known as biology class, and Dr. Gregory is about to call on him. After class, Dr. Gregory, who is the only teacher to believe in and encourage Buffy, is killed by an unseen monster.

That night at the Bronze, Xander is taunted by fellow student Blayne for his lack of sexual prowess. When Buffy and Willow arrive, Xander smoothly puts his arms around both girls in order to buff up his reputation. Buffy rushes off when Angel shows up. He gives her his jacket to warm her and as he's taking it off, she notices several slashes on his arm. She jokes that somebody must have attacked him with a big fork. He warns her about the new threat and to not let him corner her as he'll "rip [her] throat out." He leaves quickly after the warning.

The next day, Buffy informs Giles that Angel warned her about a "fork guy." The substitute biology teacher, Natalie French, shows up and turns every boy's head. She seems to have a thing about insects, especially the praying mantis. At lunch, Cordelia finds the headless body of Dr. Gregory in the cafeteria locker. The Scoobies try to figure out if there is a connection to the Master, but don't rule out that there is a second monster about. Later that night, Buffy goes into the park and confronts a vampire who has a large claw in place of a right hand. The fight is interrupted by the police, and the vampire flees. While in pursuit, she sees the vampire come up behind Miss French, who just stares at him. To Buffy's surprise, the vampire bolts in panic.

At school the next day, Buffy is sent to a counselor to help her get over seeing the dead body. This makes her late for the surprise test that Miss French gives the class - a test where she helps Xander with a question. Buffy arrives and looks through the window in the door. Sensing Buffy's presence, Miss French turns her head 180 degrees to look at her. Later, Miss French asks Xander over to her house in the evening to work on a project.

Miss French welcomes Xander with a drink, a fire in the fireplace, and a revealing dress. The drink knocks him out just when she turns into an insect. Xander wakes up in a cage next to Blayne who tells him how she mates like a praying mantis, biting off men's heads in the process. In the library, the gang discovers that the She-Mantis lures virgins to her for her mating ritual. Willow reveals that Xander is a virgin then calls Xander's mother and finds out that he isn't home. They realize that he's in great danger. Buffy gets Giles to record bat sonar while Miss French chooses Xander to be her next victim. When the remaining Scoobies visit the house where Miss French is supposed to live, they find a nice old woman who is the real Ms. French but retired in 1972. To quickly find Xander, Buffy tracks the one-handed vampire, who is so scared of the She-Mantis that he knows just which house is the right one. After finding the right house, the vampire attacks Buffy, but she quickly stakes him with a broken fence post. Buffy breaks through the window when the mantis is about to mate with Xander. She slays the insect, using the bat sonar to weaken it. Xander then destroys the eggs that are in the house.

Buffy, in Angel's jacket, later meets him at the Bronze. He tells her to keep it, and Buffy is obviously smitten. Later, Buffy puts Dr. Gregory's glasses in his jacket, still hanging in the classroom closet, not noticing that there are She-Mantis eggs attached to the bottom of a shelf or that one of them hatches.

This could just be coincidence, but in The Avengers - which was directed by Joss Whedon - Tony Stark has a fixation with shwarma and constantly suggests getting some after the fight. Indeed in the post-credits scene, all of the Avengers are shown at a shwarma restaurant chilling out and eating shwarma just after the New York fight. 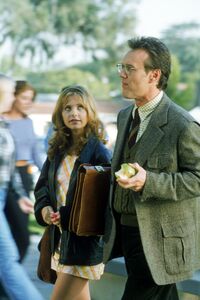 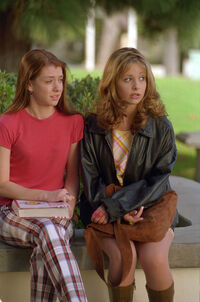 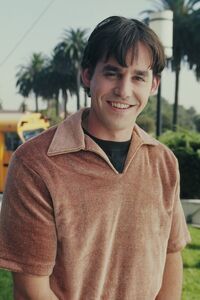 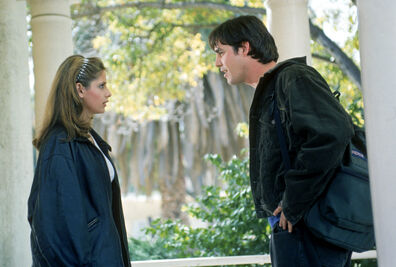 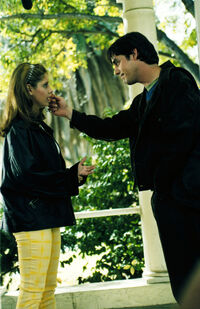 Retrieved from "https://buffy.fandom.com/wiki/Teacher%27s_Pet?oldid=174996"
Community content is available under CC-BY-SA unless otherwise noted.