Buffy's not the only one chosen for a higher purpose.

Sweet Sixteen is a Buffy the Vampire Slayer novel. It was written by Scott Ciencin and originally published in April 2002 by Pocket Books.

Buffy's younger sister, Dawn, knows how it feels to be different. So when she overhears her classmates teasing a new girl, Arianna, she steps in, and the two become friends. But when Buffy comes home one afternoon to find her sister and Arianna hanging out, she's surprised — she encountered Arianna one night on patrol. A demon had been attacking her, but Arianna fought back on her own. What's that about?

The more the gang gets to know Arianna, the more puzzled they are. She has superstrength and accelerated healing power, just like a slayer. But what she also has is a dark secret and an unusual past — and a dangerous legacy that is primed to reveal itself, just as soon as she turns sweet sixteen... 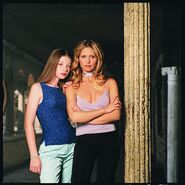 Cover in Germany
Add a photo to this gallery
Retrieved from "https://buffy.fandom.com/wiki/Sweet_Sixteen?oldid=212947"
Community content is available under CC-BY-SA unless otherwise noted.