"Once More, with Feeling"

Sweet was a powerful demon whose presence caused the inhabitants of an area he visited to burst into song and dance, which would lead to some of the victims spontaneously combusting.[1]

“I come from the imagination / and I'm here strictly by your invocation / So what do you say? / Why don't we dance a while?”
―Sweet[src]

Sweet claimed to have given Nero "his very first fiddle," implying he has been summoned to Earth at least once, during the Roman emperor's reign.[1]

In 2001, Xander used Sweet's talisman to summon the demon, believing that his presence would bring "dances and songs" and guarantee him and Anya a "happy ending." However, Xander was unaware that the spell would inspire uncontrollable dancing and singing, confessions of secrets, and spontaneous combustion. However, Dawn took the talisman that summoned him due to her kleptomania, which prompted Sweet to believe she had been the one to invoke him when she wore the necklace.[1]

Sweet established his lair at the Bronze and sent his henchmen to kidnap Dawn and bring her to him, intending to make her his queen and take her to his hell dimension. While he introduced himself in a musical number, Dawn denied his seduction attempt and warned that her sister Buffy was the Slayer. However, Sweet was intrigued and sent his henchmen to lure the Slayer to him, hoping to see her burn.[1]

Buffy arrived at the Bronze and threatened Sweet, then told him her perspective of life through a musical number. Her friends of the Scooby Gang appeared as backup, but Buffy then revealed in the song that they had torn her from heaven. In the dance, Buffy nearly combusted after until Spike stopped her. Sweet applauded the number and insisted on taking Dawn with him since she was bearing his talisman. However, Xander revealed he had been the one to perform the invocation and not Dawn, so Sweet dismissed the rules. He sang to the Scoobies that things didn't end well for them because of their secrets revealed, then he departed.[1]

Sweet was a smooth-talking demon with an ironic sense of humor and reveled in the chaos his haunting caused. He sarcastically told the Scooby Gang that "they beat the bad guy" when he left smugly.[1]

Though humanoid, Sweet was hairless and red-skinned, with a pointed chin and lazy eye.[1]

Mind manipulation — Sweet had an ability to cause every being, including other demons, in a given area to burst into singing and dancing, as well as make them feel like they were in a musical.[1]

Teleportation — Sweet could teleport to and from the Earth dimension by transforming himself into a whirling blue light.[1]

Hypnosis — Sweet demonstrated some hypnotic power, luring Dawn into dancing with him.[1]

Combustion — As a result of living in a musical, people affected by it would sing and dance to the point that they spontaneously combusted.[1]

Reality warping — Sweet had certain reality-bending abilities, allowing him to: 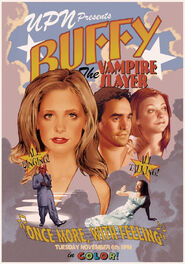 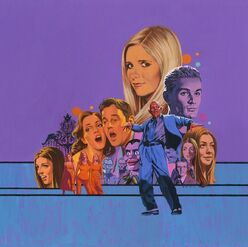