"Superstar" is the seventeenth episode of the fourth season of Buffy the Vampire Slayer and the seventy-third episode in the series. Written by Jane Espenson and directed by David Grossman, it originally broadcast on April 4, 2000 on The WB.

FANTASY VS. REALITY — Buffy, still reeling from the discovery that Riley was intimate with Faith, must put aside her personal emotions and summon the strength to uncover why the entire town thinks that former high school nerd, Jonathan, is Sunnydale's newest version of a superhero.[1]

Buffy and the Scooby Gang are hunting vampires in a graveyard. When they discover a nest, they decide there are too many vampires to fight, so they go to Jonathan's mansion to ask for help. Later, at Giles' place, Jonathan checks out weapons and even practices hand-to-hand with Buffy. Willow uses her computer skills to find a floor plan of the vampires' lair, but she can see only one way to enter it. Jonathan quickly finds a better way. With a plan in mind, Jonathan passes out weapons, hands out assignments, and wins a chess game with Giles.

At the crypt, Jonathan slays the majority of the vampires, which leaves Buffy feeling inadequate in comparison. Jonathan reassuringly tells her that it's okay, "As long as you do your best." As they leave the crypt, Jonathan is ambushed by paparazzi. He senses Spike hiding in the shadows and calls him out to trade insults. Jonathan wins the verbal battle with Spike, while Buffy is at a loss for words. Spike, interestingly enough, refers to Buffy as "Betty," and does for the rest of the episode.

While putting pictures of Jonathan up on a wall, Willow and Tara talk about the fight earlier that night and Buffy's relationship with Riley.

At Riley's dorm room, Riley tells Buffy he is feeling better and is no longer taking the drugs that the Initiative was feeding him. His superiors tell him that the food at the Initiative is no longer doctored, but to be sure, Riley still doesn't eat it. Buffy jokes about her poor basketball skills as a way to cover the fact that any time he tries to touch her, she moves away. She leaves, cutting the conversation short.

Buffy meets Jonathan at the Espresso Pump to get relationship advice. Jonathan thinks Buffy is still angry with Riley for sleeping with Faith while she had swapped bodies with Buffy. Jonathan advises Buffy to forgive Riley for not realizing that he was really sleeping with Faith, instead of her. While they are talking, one of Jonathan's fans, named Karen, asks him to sign a copy of his book for her.

Colonel George Haviland is the new commander at The Initiative, but he yields to Jonathan, who is consulting with the Initiative on how to find and destroy Adam. Jonathan has noticed that Adam never eats. By examining Professor Walsh's diagrams, he has learned that Adam has a uranium-235 derived power source in his chest. Jonathan explains that the demon cannot be killed by decapitation; he must be annihilated completely.

Outside Jonathan's mansion, the fan from the coffee shop, Karen, is trying to get another glimpse of her idol, using binoculars to do so. While spying, she is attacked by a grotesque, long-armed demon in the rain, but manages to escape and run away, terrified.

At the Initiative headquarters, Riley seeks advice from Jonathan about his relationship with Buffy. Riley echoes the same concerns that Buffy expressed to Jonathan earlier at the coffee shop. As he tells Riley not to worry, that "people don't always see what's in front of them," Jonathan nonchalantly dons a blindfold and raises a pistol to shoot apples off the heads of three Initiative commandos.

At the Bronze, Jonathan sings on stage, Rat Pack style, while Buffy and Riley take the dance floor. When Jonathan finishes his song and plays the trumpet, Xander and Anya, very turned on by Jonathan, leave to have sex. Buffy lets Riley know that she forgives him and wants to move on with their relationship. A still terrified Karen goes to The Bronze to find Jonathan, who comforts her and takes her to his mansion for her safety. Buffy and Riley follow.

At the mansion, Karen describes the monster and draws a picture of the triangular symbol on its forehead. Jonathan recognizes the symbol, but underplays its significance. He says the monster is little more than an animal and not harmful, and promises to take care of the matter. As Jonathan leaves to take Karen home, Buffy looks puzzled, noticing his evasiveness.

Adam sits in front of several television sets at his lair. When he sees Jonathan on the screens, he knows at once that "these are lies" and that Jonathan has cast a spell. Adam claims to be "more awake and alive" than any human or demon has ever been. He sees no need to do anything about Jonathan because "these magics are unstable."

At Jonathan's mansion, twin blond Swedish girls, Inga and Ilsa, call for Jonathan to come back to bed. He drops his robe to reveal a triangular symbol on his shoulder, just like the one on the monster that Karen had described.

Buffy, Willow, and Tara are walking on campus. Buffy says that Jonathan seemed scared when he recognized the symbol, but Willow protests that Jonathan is never scared. To prove his bravery, Willow reminds Buffy that she had presented Jonathan with a class protector award at their senior prom. Tara then leaves Buffy and Willow to go her dorm room. On the way to her room, Tara is attacked by the same monster that attacked Karen. She confuses it with a spell and hides in a supply closet. The next morning, Tara identifies the demon by the symbol on its head, and Buffy has even more reasons to question Jonathan.

Buffy stops by Xander's place. He is not there, but Anya lets her in. Xander has a collection of Jonathan comic books and trading cards. Buffy questions how Jonathan could be so perfect, and asks Anya if a person could wish that the whole world would be different. Based on her experience as a vengeance demon, Anya answers yes. She then illustrates her point to Buffy by describing there could be a world without shrimp, "even entire worlds with nothing but shrimp."

Buffy calls a Scooby meeting at Giles' place, where she expresses doubts about Jonathan. She does not know how he starred in The Matrix without ever leaving Sunnydale, or how he graduated from medical school when he's only 18. She asks the group if Jonathan might be too perfect, but none of them can see her point. Even Riley thinks her ideas sound like nonsense, but "having learned to trust her," he encourages everyone to follow her lead, in spite of the Scooby's lack of trust in her abilities. They look at Giles' copy of Jonathan's swimsuit calendar to see the monster's mark on his shoulder. Jonathan arrives and explains that he does have a history with the monster, and becomes confused every time he faces it. He says that he had the monster's mark tattooed on him so that he "would not underestimate it next time."

Buffy suggests that the two of them go after the monster. Jonathan says it has probably left town, but agrees to try to find it with her. While searching a cemetery, Jonathan and Buffy meet Spike. Buffy threatens Spike, telling him that the butchers in town respect Jonathan, and Spike might be extra thirsty for blood if he doesn't give them some information. Spike tells them several vampires have been kicked out of a cave by something "probably pretty big."

Back at Giles' place, Willow finds the mark in a book, learning that Jonathan did an augmentation spell to make himself a paragon of all that is ideal and great. The downside is that the spell must create an opposing force of evil to balance the new force of good. Giles concludes that if Jonathan's monster were killed, the spell would be broken and the world, including Jonathan, would revert to "whatever he was before." Anya says that Jonathan won't want Buffy to get very far in her quest.

Jonathan and Buffy go to the cave mentioned by Spike. They see a deep pit, and Jonathan reaches for Buffy's hand; for a moment it appears he may intend to push her into the pit. Instead, he grasps her wrist and reminds her that they are hunting a monster. The monster appears and knocks Jonathan out.

At Giles' place, the gang considers what the world would be like if the spell were broken. Willow can't believe that Buffy was actually right, and Xander dislikes the idea. Giles says the world will be the same, except that the "super" Jonathan won't be in it, making them all sad. Riley is afraid that if Buffy can't kill the monster, they will be stuck in their alternate reality forever.

Back at the cave, Jonathan recovers and attacks the monster, but with little effect. He tells Buffy that she will have to do the fighting; he explains that the more she hurts the monster, the more Jonathan will succumb to his true nature. Buffy's fighting skills suddenly improve. The monster almost knocks her into the pit, but Jonathan tackles it from behind and the two fall in. Buffy grabs Jonathan's ankle, saving him, while the monster falls.

A band of white light passes through Sunnydale, erasing all the signs of Jonathan's celebrity status. The next day, under a tree on the UC Sunnydale campus, the Scoobies reflect on how things have changed. Xander misses the way Jonathan made him feel about himself. Riley says that, in the alternate reality, he felt "way too tall." Buffy sees Jonathan standing alone at a distance and walks over to join him. Jonathan explains that he learned the spell from a boy he met during counseling after his attempted suicide. However, the boy failed to mention that the spell would produce a monster. Buffy warns him not to fix things all at once, and that things take time. Her advice to him is reminiscent of the advice he gave Buffy regarding her relationship with Riley.

Buffy and Riley are kissing on his bed, when Buffy jokingly moans: "Jonathan."

Spike: "You're a bleeding idiot, you are, Jonathan. Cuz you'll be the first victim and you'll be stone dead before you hit the ground!" (then, to himself, proudly) "The worst kind of scum." 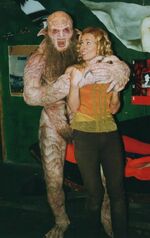 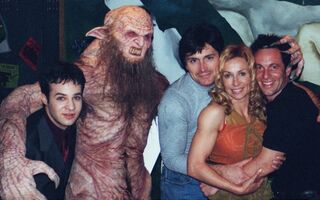