Spike and Dru: Paint the Town Red is a one-shot from Buffy the Vampire Slayer Classic comic book series. Written by James Marsters with Christopher Golden and illustrated by Ryan Sook, it was originally published on April 14, 1999 by Dark Horse Comics.

Spike and Drusilla, the fan-favorite bloodsuckers from the hit show Buffy the Vampire Slayer, hit the road in their very own one-shot! Following their flight from Sunnydale at the end of last season, the pair find themselves in Eastern Europe, recovering and searching for what they have always sought. For Drusilla, her quest for power is consuming. Spike just wants to have some fun. Will their personal differences be too much for the couple to succeed?[1] 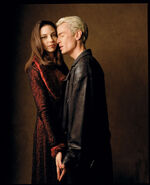 Original picture for cover
Add a photo to this gallery

Retrieved from "https://buffy.fandom.com/wiki/Spike_and_Dru:_Paint_the_Town_Red?oldid=235790"
Community content is available under CC-BY-SA unless otherwise noted.