"Soul Purpose" is the tenth episode of the fifth season of Angel and the ninety-eighth episode overall. Written by Brent Fletcher with Elizabeth Craft and directed by David Boreanaz, it was originally broadcast on January 21, 2004, on The WB network.

DAVID BOREANAZ MAKES HIS DIRECTORIAL DEBUT — A mysterious stranger approaches Spike claiming responsibility for recorporealizing him in a mission to guide Spike in supplanting Angel as the new vampire champion. Meanwhile, Angel is racked by intense fever dreams and hallucinations of his worst fears intensifying his worries that he will lose authority to Spike.[1]

Angel has lost his fight against Spike, who is to drink from the Cup of Perpetual Torment. However this time, the cup isn't a fake, and radiance shines down on Spike as he achieves the Shanshu Prophecy and is restored to life. The same light then incinerates Angel. This is revealed to be Angel's dream, as he wakes up in his office shaken.

Lindsey approaches Spike at a strip club, implying he was responsible for Spike's return from the dead and his subsequent return to corporeality. Introducing himself as Doyle, Lindsey claims he has visions of people in trouble and that he had a vision of a girl who's about to get attacked in an alley. Spike tells him to go to Angel instead, but "Doyle" says that Angel is "working the other side of the tracks" now. Spike saves the girl, after which Lindsey suggests that Spike may be the new champion of the Powers That Be. The next night, Spike saves a couple from vampires, telling them, "I'm the hero."

Meanwhile at Wolfram & Hart, Wesley and Gunn present Angel with possible solutions to deal with an evil warlock, but Angel — weary of the "gray area" of morality in which he constantly finds himself — announces: "Let's kill them all." He then says that he's just tired and the others tell him to go get some sleep.

In Angel's dream, Fred says, "Let's take a look under the hood." She cuts open Angel's chest and starts pulling out his internal organs, including his "dried-up little walnut" of a heart. Fred also pulls out a strand of beads (which she puts on), some raisins (which she eats), and a license plate. She pulls out a fishbowl, calling the dead goldfish inside Angel's soul, and says that they'll have to flush it and hands it to the bear standing next to her. Fred turns back to Angel and tells him that she can't find anything wrong with him except that he's empty.

The next morning, Eve gives Wesley a fragment of a relic, saying the Senior Partners want to know what it is. Gunn arrives and announces that a vampire matching Spike's description has been out on the streets, saving people.

Meanwhile, Angel is dreaming that Spike and Buffy are having sex on his bed. He wakes up and goes downstairs, where Gunn tells him to hurry or he will "miss it." Angel joins the group of people in his office, staring out the windows at Los Angeles as it burns. Angel realizes what's going on and heads towards the windows. "You're blocking the apocalypse," Harmony tells him. Wesley assures Angel that Spike will take care of it. Lorne suggests that Angel change his clothes, since there's something on his shirt. Angel looks down to see a bloody stake sticking out of his heart. As Angel dreams in his room, a blue creature feeds off of his chest in the same spot as the stake in his dream. Fred holds out a cake with a picture of Los Angeles burning and the words "Way to go Spike!" written on it. Everyone sings, "For He's a Jolly Good Fellow" and yells for Spike to give a speech. He talks about fulfilling his destiny to turn Los Angeles into utopia. A blue fairy floats in and sprinkles gold dust on Spike, making his heart beat again. As everyone cheers for Spike, Angel is suddenly a man staffing the mail cart.

In reality, Spike is at the spartan basement apartment that Lindsey provided for him, when Gunn and Wesley stop by. They tell him that if he wants to rescue people, Wolfram & Hart has resources that can help him. Spike declines the offer, saying Wolfram & Hart is the same evil law firm it has always been. At Eve's apartment, Lindsey reminds Eve if the Senior Partners find out what they're up to, they'll kill him. Eve assures him that thanks to his tattoos, they won't find him. Wesley and Gunn head back to Wolfram & Hart and tell Fred that Spike thinks they have sold out. Fred starts to go up to check on Angel, until Eve arrives, reminding her she is supposed to be testing the relic.

Angel is dreaming of Lorne dressed Old West-style, playing "My Darling Clementine" on a piano in Angel's room. As Harmony (dressed like a Copacabana waitress) serves him a drink, Angel tells Lorne that everything hurts. "That's life," Lorne says, "everything hurts, and then we die," though in Angel's case, everything hurts and he lives forever. Lorne tells Angel to sing, but Angel could not. Nearby, Fred, who was at a table with Wesley and Gunn, says, "I told you he was empty." Lorne tells Angel that the crowd is turning on him as Gunn snarls and hisses at Angel. Eve appears, noting that Angel is suffering. Lorne says that Angel still has something on his shirt, and Angel looks down to see the blue creature on his chest. He pulls it off, wakes up, and kills it. Eve tells him that he's still dreaming but it's almost over. She pulls a bigger blue creature out of the box she's holding and puts it on him. She watches while he struggles against it, then leaves. At Spike's apartment, Lindsey pretends to have a vision and tells Spike that he should take care of it.

Angel sits in a chair in the middle of a sunny field as the gang approach him. "You can stay as long as you like," Wesley says. "Stay forever." Angel says he's not done with his job, but Wesley says that he can be if he wants to. Fred says that he'll be fine — he just has to stop caring. Suddenly, the four of them throw their heads back and scream. In Angel's room, Spike grabs the blue creature and kills it. "No need to thank me," he tells Angel. "Just helping the helpless."

Later, the gang and Eve gather in Angel's room and Wesley explains that the creature was a parasite which makes the host oblivious to its presence and causes hallucinations. If Spike had not killed it, Angel might have been trapped in a vegetative state. Angel says Eve put the parasite on him — after Eve put the second parasite on him, she changed her clothes so that Angel wouldn't remember her being there for real, but she didn't change her earrings. He notes that Eve is playing her own game and wonders what the Senior Partners would say if they knew. Eve says that they're all just blaming her for their problems when they should really be looking within the group. The group glares at her until she leaves. 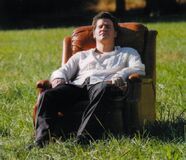 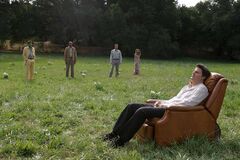 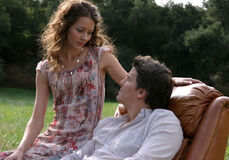 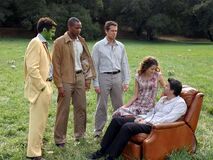 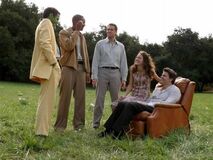