"Something Blue" is the ninth episode of the fourth season of Buffy the Vampire Slayer television show, and is the sixty-fifth episode in the series. It was written by Tracey Forbes and directed by Nick Marck. It originally broadcast on November 30, 1999.

Willow casts a spell to assuage her pain but it goes awry, blinding Giles, turning Xander into a demon magnet, and causing Buffy and Spike to become engaged.

Willow is still hurting over Oz’s departure and often sneaks into his bedroom as a way of feeling close to him. At college, Buffy talks to Riley and he invites her out on a picnic. Willow and Buffy talk about a possible relationship with Riley, and the consequences that may result from any relationship. Buffy wonders if the passion of her relationships comes from the pain and fighting.

Spike is chained up and kept in the bathtub at Giles’s apartment. Buffy tries to get information from him, and feeds him pig’s blood, but he doesn’t give up much. Willow suggests a truth spell to make Spike talk. She promises to gather the ingredients and return the next morning. After she leaves, Buffy and Giles discuss how well Willow is coping since Oz left, only for Spike to offer his insight warning that in fact she’s close to breaking down. This is proved right when Willow goes back to Oz’s place to find the room stripped bare of his possessions. Later she tells Buffy while crying that Oz asked for his stuff to be sent on to him which has crushed her last hopes that he might return someday.

The next day, Buffy and Riley arrange a date. When Willow doesn’t show up to perform the truth spell as planned, Giles calls Willow but gets no answer. That night at The Bronze, Willow opts to drown her sorrows in alcohol. After she insults Xander, Buffy takes her back to their dorm. Later, in the bathroom, Willow performs a spell to let her will be granted in order to make her pain go away.

Willow tries to see if her spell worked, but her commands don’t work. Giles drops by to find out why she didn’t show to help him perform the spell. She feels like there’s too much pressure on her that she can’t live up to, and snaps at Giles when he tells her that she needs to focus on her responsibilities and not to perform any more spells alone while she’s in such a fragile state. Angry, she says that he can’t see anything, and then Giles suddenly begins to have trouble with his eyesight and decides it’s best to leave for now. He then tries to perform the spell on Spike alone but is having difficulty reading. After Giles drops the key to the chains keeping Spike captive, Spike is able to break free and run away. While talking to Buffy, one of Willow’s casual comments briefly returns Amy to human form (unseen by either girl), before Willow just as casually — and unwittingly — turns her back into a rat.

After Giles calls, Buffy goes to find Spike and both are surprised when she manages to find the vampire within seconds (once more due to a sarcastic comment from Willow), she brings him back to Giles’s apartment. While talking to Xander, Willow sarcastically mentions Buffy and Spike getting married, and then at Giles’s place, Spike proposes to Buffy and she accepts.

Xander continues to try to console Willow, assuring her she’ll feel better in time and will meet someone else, but Willow instead lists Xander’s past (and current) relationships stating he’s a ’demon magnet’. While Buffy and Spike cuddle and kiss and make plans for the wedding, Giles calls Willow for help and moments later reaches the conclusion that he is totally blind. Buffy visits the magic shop for supplies to undo the spell that caused Giles to become blind. She then runs into Riley outside of a bridal shop and tells him about the wedding, which confuses and upsets him.

Xander and Anya’s romantic time is interrupted by various demons that attack them. They rush to Giles’s place, and when Xander sees Buffy and Spike together and engaged he puts the pieces together and the gang realizes that everything Willow says is coming true. D’Hoffryn, the demon responsible for making Anya a vengeance demon, comes forth and takes Willow through a portal into his demon world to make the same offer. When the gang goes to look for her, Anya recognizes the remains of portal left by D’Hoffryn.

Buffy and the rest of the group go to a crypt where they hope to stop D’Hoffryn from turning Willow into a demon. En route to the crypt, several demons attack, still drawn to Xander because of Willow’s spell. In the meantime, Willow turns down D’Hoffryn’s offer and, thankfully, the demon accepts her decision without argument and gives her his talisman if she changes her mind before sending her back. Willow breaks the spell and Buffy and Spike find themselves in the middle of a kiss, much to their horror and disgust. Willow apologizes and tries to make up for her messed-up spell with cookies. Buffy finds herself over the whole "bad boy" thing. The next day, Buffy finds Riley and manages to convince him her talk of her upcoming wedding was a joke.

Buffy: "So she did a good spell — but the plan kind of sucked. I mean, she’s the one stuck eating pellets out of a plastic cup." 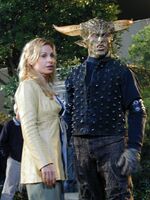 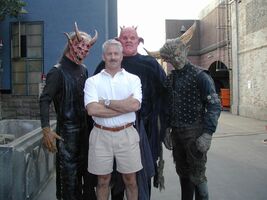 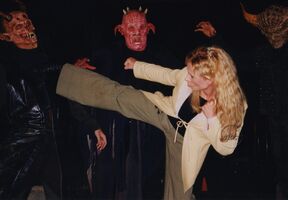 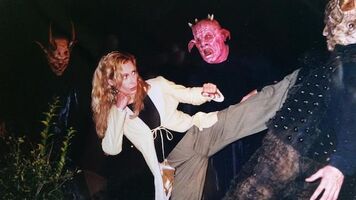 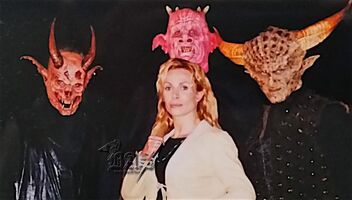 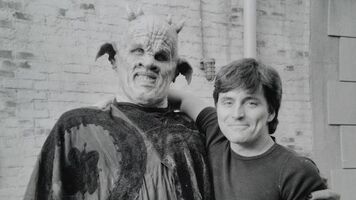 “Three words you thought you’d never hear Buffy say: ‘I do… Spike’.”
Add a photo to this gallery

Retrieved from "https://buffy.fandom.com/wiki/Something_Blue?oldid=212078"
Community content is available under CC-BY-SA unless otherwise noted.