Fred arrives with the new case. Angel notes that all of the kids were watching TV at the same time of day when they became ill and Lorne says Smile Time is on at that time and in "the right demographic." Angel heads to Smile Time's studio, and, ignoring a "DON'T" sign, enters a hidden room where a man with a towel over his head sits under a large egg. The egg opens, forming a glowing smile that fires a beam that tosses Angel across the room. Angel pulls himself up, only now he's a puppet.

When Puppet Angel explains to the group what happened, Fred tells the lab to start recording Smile Time so she can analyze it. Angel orders Lorne and Gunn to talk to the show's creator, Gregor Framkin, at the studio. Nina arrives and Puppet Angel ducks under his desk so she won't see him. She tries to ask him if everything's okay, but he kicks her out. Spike arrives, and is shocked and amused to see that Angel is "a wee little puppet man." Angel pummels a giggling Spike.

Puppet Angel and the gang interrupt and the fighting begins, with Gunn decapitating Groofus and subsequently fighting Flora while Angel goes puppet-to-puppet with Polo. Fred and Wesley rush to the room with the nest egg, where Ratio fights Wesley while Fred reads the spell to break the nest egg, destroying the egg and saving the kids after Wesley defeats Ratio. In the main studio, Gunn defeats Flora and Angel defeats Polo by throwing him onto the tree house (During which he transforms to "vamp puppet face"). The next day, Nina wakes up in her cage with fabric around her and fears she ate Puppet Angel, until he tells her he's okay and will be back to normal in a few days. They agree to have breakfast together, with Nina jokingly wondering what puppets eat. In Wesley's office, Fred tells him she's been trying to subtly indicate her interest in him. She grabs him and kisses him; he happily returns the gesture as the puppets sing their self-esteem song again. 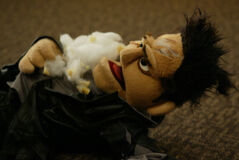 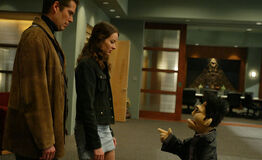 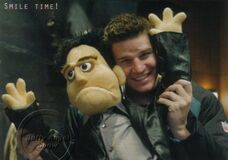 Retrieved from "https://buffy.fandom.com/wiki/Smile_Time?oldid=224460"
Community content is available under CC-BY-SA unless otherwise noted.