"Smashed" is the ninth episode of the sixth season of Buffy the Vampire Slayer television show, and is the 109th episode in the series. Written by Drew Z. Greenberg and directed by Turi Meyer, it originally broadcast on November 20, 2001 on UPN.

Spike gets a headache that renews his primal impulses when Buffy rejects his amorous advances; Willow reverts a former classmate to her old self; Jonathan, Warren and Andrew pull a heist with the help of a new weapon.[1]

During patrol, Buffy comes to the rescue of a couple and is surprised to discover it's a simple mugging. Spike tries to help her, but the muggers are human so his chip is triggered, allowing the muggers to run away. After the pain is relieved, Buffy and Spike argue briefly about their kisses, until Buffy blows him off.

At the Summers' home, Willow finds herself lonely without Tara and starts talking to Amy the rat, only to realize that she now has the knowledge to turn her back into a human. Summoning a spell containing the correct spell words, she reverses the transformation and Amy is human again. At the Sunnydale Natural History Museum, the Trio steal a diamond and freeze Rusty, the security guard, with their freeze ray.

Back at home, Amy and Willow catch up. Amy starts talking about prom, but she soon finds out that she has been a rat for almost three years. Buffy returns home and intends to tell Willow about her situation with Spike, but the shock of seeing Amy derails the conversation.

After seeing the frozen man on the news, Buffy rushes to investigate. She finds Spike once again, who wants to talk about the kisses, but Buffy claims that she was just depressed about Giles leaving. Spike is not convinced and tries to show Buffy he's changed, but Buffy ends up slugging him. Spike hits her back and braces himself for the pain, but the chip does not activate. However, he quickly pretends to be in pain. Spike then takes to the streets alone looking for a victim. He dives in to bite a girl, but the chip activates, allowing her to get away.

The next day, Tara takes Dawn to drink a milkshake after a movie. Tara tells Dawn that her moving out won't mean that she won't be there for her. Dawn mentions the possibility of Willow and Tara reconciling, so Tara explains that she still loves Willow, but right now, it's not possible.

Meanwhile, at the Magic Box, Buffy, Anya, Willow, and Xander research the stolen diamond. Willow takes out a computer to look up information and everyone is happy to see her doing things without the use of magic. Their happiness is short-lived, however, as she uses a spell to connect with the computer. As the Trio prepare to begin the next phase of their plan, Spike arrives, looking for Warren, and coerces him into looking at his chip by threatening a vintage Boba Fett action figure. Warren examines the chip, then tells Spike that it still works fine. Spike concludes that Buffy has been brought back "wrong."

Bored, Amy convinces Willow to go do something fun out on the town. At the Bronze, Willow continues to bring Amy up to date. When two boys ask them to dance, Amy is only too happy to accept. Later, when the two college guys forcibly try to get Amy back on the dance floor, Willow and Amy magically trap the two into go-go cages and skimpy outfits.

At the Magic Box, Xander, Anya, and Buffy continue their research looking for a demon that eats diamonds. Discouraged by their lack of progress, they talk about Willow. Xander and Anya tell Buffy that they share Tara's concern that she is abusing magic. Anya warns that once someone good gets a taste of "bad" that it's difficult to bring them back. Spike then calls the Magic Box, inviting Buffy to the cemetery, but she declines and hangs up. After Xander and Anya head home for the night, Spike appears as Buffy is leaving the shop alone. He stands in front of Buffy, not letting her pass. She smacks him, but she's surprised when Spike hits her back. Unaffected by the chip, Spike tells her she "came back wrong."

At the Bronze, Willow and Amy continue magically changing everything around them. As Willow turns a boy band into a girl band, people are dancing aimlessly in elaborate outfits and mutate. Dawn and Tara return to the empty Summers' residence, so Tara agrees to wait for Buffy or Willow to return so Dawn won't be alone.

Spike and Buffy fight each other and gets them inside a condemned house. The Slayer and the vampire are knocking walls and pillars, as well as each other. While they insult it other, Buffy suddenly pins Spike against a wall and begins to kiss him. She jumps onto him and they begin to have sex. They move around the house and fall through the floor into a basement. They continue to have sex as the house crumbles around them.

Spike moves about the room. Organized. Preparing. From a chest of drawers, he pulls out a stun gun, fires it a couple times to make sure it works. Sets in on a table. From a trunk at the foot of the bed, he brings out a coil of rope, pulling it tight. Puts it on the table, too. He rustles some more in the trunk, reveals a set of chains. And a handful of padlocks. And a pair of handcuffs. On the table. He rummages through a stack of records, finds just what he's looking for: an LP of Roxy Music's Avalon. He pops it on a dusty old turntable. He lights some candles, sets a bouquet of flowers in a vase, sprinkles rose petals on the bed. He looks around, taking in his handiwork, then lets out a long, contented sigh.
Spike: "There. All ready."
He lets his eyes sweep the room once more, a final look, then Spike runs from his crypt, excited, determined focused. Spike running much slower, winded. He eases up, starts walking. Spike gets to a pay phone, exhausted but still determined.
Spike: "Now at last, Buffy, you will come to me, and your destiny wi— wait."
He searches his pockets — all of them.
Spike: "Coulda sworn I brought change."
He keeps searching. Nothing. He checks the coin return slot on the phone. Empty.
Spike: "Oh, balls."
And he runs back from whence he came, frustrated. 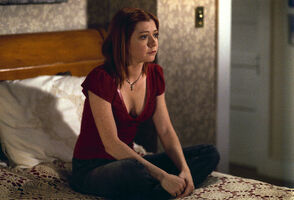 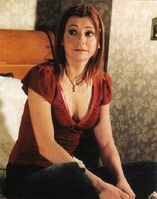 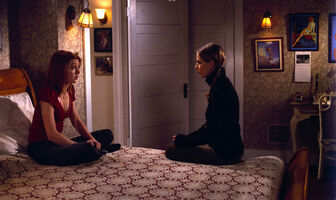 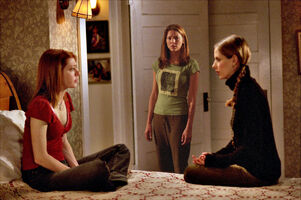 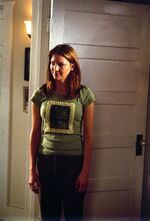 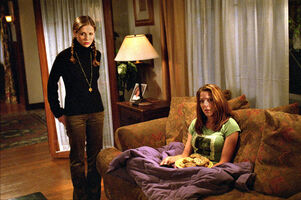 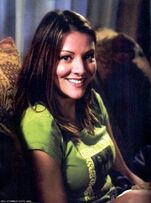